Where to party in Vegas during Mayweather-McGregor weekend | List 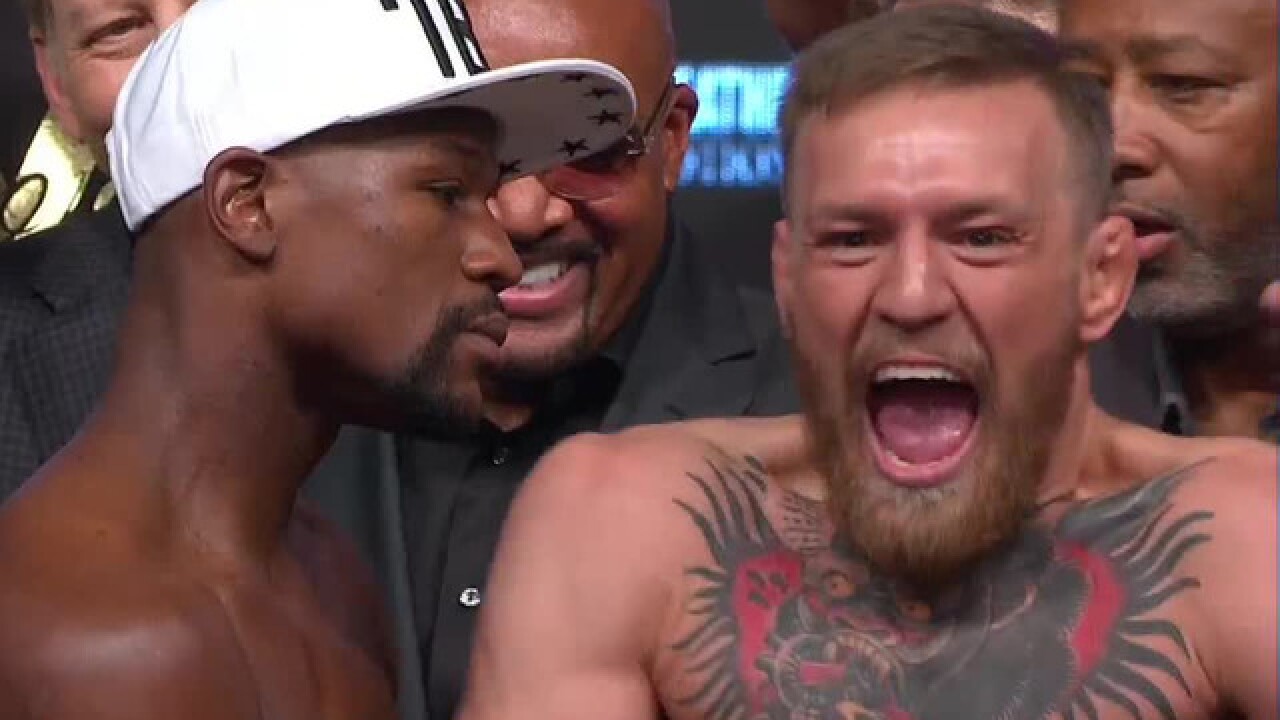 Copyright 2017 Scripps Media, Inc. All rights reserved. This material may not be published, broadcast, rewritten, or redistributed.
<p>Floyd Mayweather and Conor McGregor at the weigh in before their fight on August 26.</p>

People are flocking in from across the globe to watch Conor McGregor take on Floyd Mayweather in Las Vegas and most of those fans won't have a ticket to Saturday night's fight. So you may be wondering why they'd spend the money?

That answer is simple — for the parties.

Like the fight itself, Las Vegas is a spectacle and many fans are content with watching a viewing of the big fight and basking in the pre and post-fight atmosphere.

With that being said, celebrities and entertainers come to Las Vegas during these high profile fights for the same reason. There's a high demand for entertainment during these weeks, which means there's a large payday for many of the artists tabbed to perform.

The list of celebrities in town is too large to list, but you can take a look at the list of parties to attend while in Vegas this weekend.

Admission is $150 and does not includes taxes, fees, food or drink.

Doors open at 6 p.m. for the fight party at Sapphire. The gentleman's club has three 100 inch high-definition screens and full digital surround sound. There will be food and drink specials throughout the night. Tickets are $150 general admission.

Want to be a fan of the “fighting Irish” for a night? Head down to 7th & Carson to watch Conor McGregor take on Floyd Mayweather.

Seating begins at 6 p.m. Tickets start at $100 per guest. All food and beverage ordered the night of the event will be paid on consumption.

Admission is $100 at Sophia's. The cost includes the fight, buffet and $30 drink credit. For $300, you get a table, buffet and drinks during fight.

BEFORE AND AFTER PARTIES

1 OAK Nightclub at The Mirage

1 Oak is bringing out some of the biggest names in the hip-hop community for their fight weekend parties. Wale will hold a special performance on Aug. 25 and YG will do the same on Aug 26.

The gentlemen’s club will host an epic after-party following the highly anticipated Mayweather vs. McGregor fight on Aug. 26.

Crazy Horse III will continue the fight night festivities on Saturday night with an appearance and guest set from DJ E11V3N. The West Coast native has taken her unique DJ presence international, performing for top clubs and festivals including E11VEN nightclub in Miami and Sundown music festival in Huntington Beach.  E11V3N will be joined by entrepreneur and cover model, Toochi Kash, who recently modeled for Maxim and FHM.

Several of Drai’s’ resident artists will take over the Drai’s LIVE stage before and after the highly-anticipated Mayweather vs. McGregor fight for three rounds of epic performances Aug. 25-27.

Hip-hop and R&B heavyweights 50 Cent, Trey Songz and Jeezy join together for a sure-to-be epic combined performance at the dazzling rooftop venue on Friday. On Saturday, Drai’s Nightclub invites fans to keep the celebrations going with Chris Brown atop The Cromwell where he will make his return to the Drai’s LIVE stage for a full-length performance of chart-topping songs.

Closing out the weekend on Aug. 27, renowned artist Fabolous will take over the venue to perform hit after hit, like “Lituation” among others.

Hakkasan has one of the deepest lineups you'll find for fight weekend and their parties span from Thursday through Monday.

Deorro, Steve Aoki, Travis Scott, and Borgeous will each host a night during fight weekend.

Gold Coast Bowling Center will host an official pre-fight event  on Aug. 25. The Hollywood in Vegas Bowling Experience will feature 20 open lanes and local celebrities.  NBA Player Andrew Wiggins of the Minnesota Timberwolves will be proudly hosting the Hollywood in Las Vegas event. The event, which starts at 8:30 p.m., will benefit Feeding America. Tickets start at $30.

Jewel Nightclub at the ARIA

Hip-hop artist J. Cole takes the stage at Jewel Nightclub on Friday to get fight fans ready for an exciting weekend of Vegas events. He's followed up by a Saturday night performance from Jamie Foxx.

OMNIA is making sure fight fans have a space to dance the night away. DJs Calvin Harris (Friday) and Kaskade (Saturday) will keep the party going long into the night.

MB Steak will be serving a special cocktail named the Irish Fist in honor of Conor McGregor on Fight Night. It is made with whiskey, sweet & sour mix and peach schnapps, served on the rocks with lime. Mayweather fans can order the  49/26 made with, bourbon, fresh lemon juice, agave nectar, bitters and orange.

SLS Las Vegas[] will host a pre-fight party at Foxtail Pool in honor of the highly-anticipated Mayweather vs. McGregor fight from noon – 6 p.m. Aug. 26.

Therapy Restaurant in Downtown Las Vegas is offering the Mayweather Margarita, which is a sparkling tequila cocktail made with orange juice and gold flakes on rim of glass. Cost is $10. They also have the Irish Knockout for $5. It is a shot of creme de menthe, Baileys and Grand Mariner.

If you would like to submit information about a party or a fight-related special for this list, send an email with details to webmaster@ktnv.com.