It's National Crab Meat Day on March 9 and despite the fact that Las Vegas is located in a desert, there is plenty of crab to be found.

Marilyn’s Cafe at Tuscany Casino
Marilyn’s Cafe will be celebrating National Crab Meat Day on March 9 with a crabtastic evening of giveaways, photo opportunities with the Crab King, and Marilyn Cafe’s famous all-you-can-eat crab dinner for $23.99.

Get ready for a perfect storm of fun: National Crab Day (March 9th) + All You Can Eat Crab night at Marilyn’s Cafe. It's going to be crab-tastic! ?? ?? ??https://t.co/RTxKsASSSW pic.twitter.com/bJmUWgHSB9 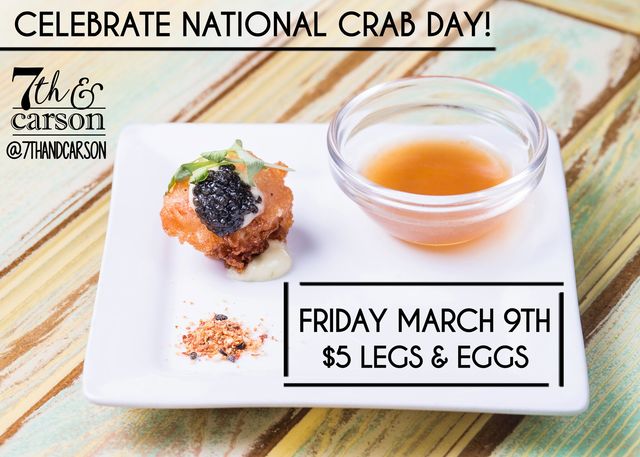 It’s Friday...or no-meat Friday for many during this time of the year! Either way, we’ve gotcha covered! Now, excuse us as we crack into this dungeness crab ??… #seefooddiet pic.twitter.com/1mDatUzJlw

Whose Hot N Juicy kind of food is this? #tagsomeone pic.twitter.com/53L5tZKssI

Bacchanal Buffet
Seafood is the first thing you see at Bacchanal Buffet at Caesars Palace. In addition to crab legs, the buffet also as lump crab avocado toast.

Let your tastebuds guide you.

Wicked Spoon
The crab legs at Wicked Spoon are a good choice. And best of all, they are already split for the customer.

Here is what I had for dinner tonight at the #WickedSpoon buffet tonight at @Cosmopolitan_LV #Vegas. In order (1)... pic.twitter.com/wNZFitEtEn

Lola’s - A Louisiana Kitchen
Enjoy a lump blue crab cake served on a bed of mixed greens and drizzled with a lemon garlic aioli sauce. Or try to deep-fried soft-shell crab.

Oyster Bar at Palace Station
The Oyster Bar serves up a lump crab cocktail and its crab pan roast is a customer favorite.

The Palm Las Vegas
The jumbo lump crab cakes at The Palm inside Forum Shops at Caesars Palace are served with jicama slaw and Old Bay aioli. You can also order jumbo crab over grilled romaine hearts with a charred lemon vinaigrette.

It's our kind of love language. pic.twitter.com/ghPQfC5Tgu

Cravin' something from the sea? Our Alaskan King Crab Cocktail is what it's gotta be! Call 702.384.4470 for reservations tonight! ?? #lvsteakhouse #alaskankingcrab

The Hush Puppy
We aren't sure what they mean but the Hush Puppy says it is home to the "Las Vegas crab legs."

KRAZY Buffet
KRAZY Buffet is probably one of the best inexpensive Chinese buffets in the city. Crab legs are offered during the dinner period.