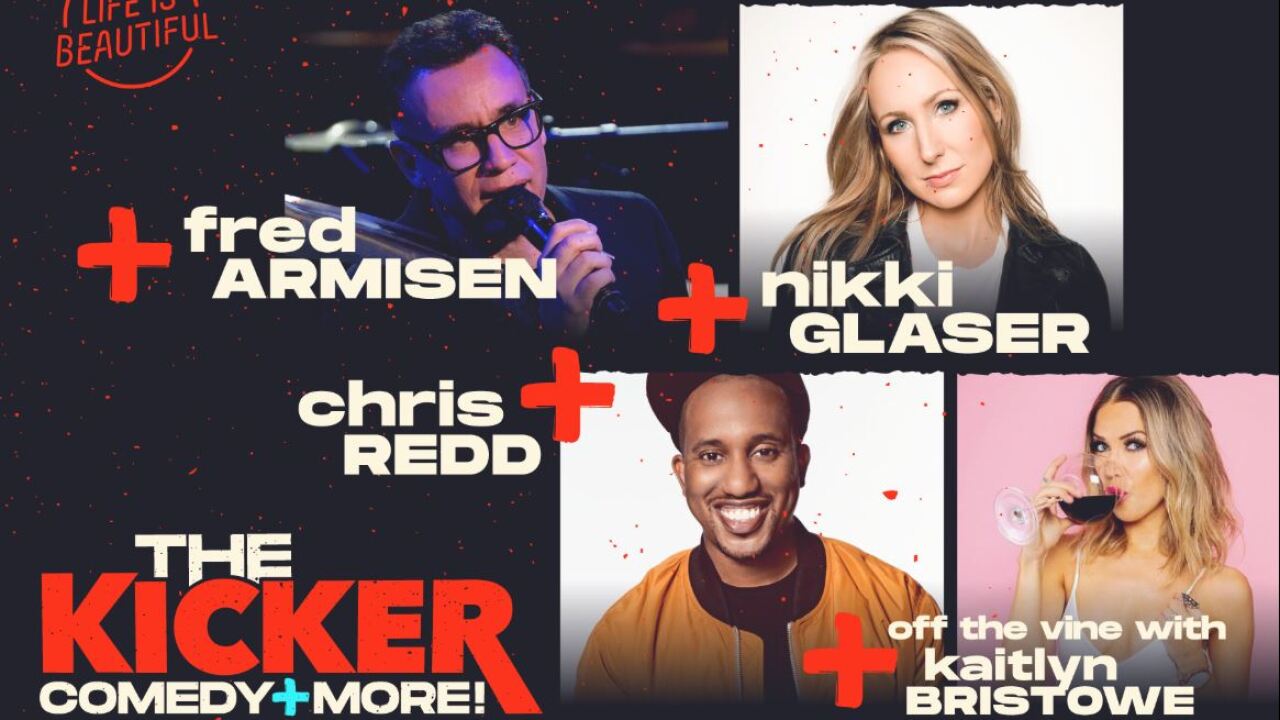 Now in its seventh year, the festival is unveiling their full line up for The Kicker, Comedy & More featuring a collection of some of the top comedians and pop culture stars in the industry including headliner Fred Armisen, host of “You Up” Nikki Glaser and SNL hot-shot Chris Redd.

Also joining the lineup this year is the winner of the second season of RuPaul’s Drag Race All Stars, Alaska Thunderfuck, along with live podcast recording of Off The Vine with Kaitlyn Bristowe of Bachelorette nation.

Already announced IDEAS acts Jonathan Van Ness and Desus & Mero will also be making guest appearances at The Kicker throughout the weekend.

The 2019 Festival will continue its mission of connecting all aspects of art and entertainment to create an experience unlike any other.

The Kicker will feature 15+ comedy and variety show acts and podcasts including live artist-to-artist conversations with Talkhouse Live, the subversive and hilarious variety show Gayme Show! hosted by NYC comedians Dave Mizzoni and Matt Rogers. After the shows close, get ready for The Emo Night Tour, a DJ-driven dance party that will bring back all the songs (and feelings) from your teenage years.

The Kicker is an experience open to all festival goers and is housed on-site at Venue Vegas.

Fred Armisen, is an American actor, comedian, writer, producer and musician best known as a cast member on Saturday Night Live from 2002 until 2013.

Nikki Glaser, one of the most sought-after young comedians in the comedy world today. Most-recently she created, executive produced and starred in her Comedy Central series Not Safe with Nikki Glaser, which was also Comedy Central’s first series to be introduced and developed across multiple platforms. She’s made multiple memorable appearances including Inside Amy Schumer, The Roast of Rob Lowe, and The Tonight Show Starring Jimmy Fallon.

Chris Redd, just wrapped his second season on SNL. Previously, he starred alongside Kathy Bates in Chuck Lorre’s Netflix series Disjointed. He made his big screen debut in the Judd Apatow/Lonely Island film POPSTAR: Never Stop Never Stopping, and he reteamed with Apatow for his Netflix series Love.

Kaitlyn Bristowe, Why not, let’s do it live! Off the Vine is coming to Vegas! Kaitlyn is bringing together everyone’s favorite things …the podcast, dancing, her closest pals, dews, and…wine, of course!

Christina P, is a stand-up comedian, writer, TV personality and podcast host. She has two Netflix specials, The Degenerates and Christina P: Mother Inferior. The Degenerates was filmed in Las Vegas. Christina discusses the upside of getting older and the Me Too movement. Her one-hour stand-up special, Christina P: Mother Inferior, filmed at the Showbox in Seattle, debuted to rave reviews. Christina discusses the realities of motherhood, marriage and her own childhood.

Naomi Ekperigin, a comedian and writer with credits including multiple seasons of Broad City, HBO’s Mrs. Fletcher and NBC’s Great News. She’s performed stand-up on Late Night with Seth Myers and HBO’s 2 Dope Queens Special, and is a co-host of the popular live show and podcast Couples Therapy.

Yamaneika Saunders, is a stand-up comedian, writer, and actress known for her work as a panelist on The Meredith Vieira Show and lead roles on Oxygen’s Funny Girls and Comedy Central’s In Security. Yam has appeared on HBO’s Crashing, truTV’s Comedy Knockout and Laff Mobb's Laff Tracks, TV Land’s The Jim Gaffigan Show, A&E’s Black and White, Comedy Central’s The Nightly Show with Larry Wilmore, and This Is Not Happening, Seeso’s What's Your F@#Cking Deal?!?!, NBC’s Last Comic Standing, and as a recurring correspondent on The Tonight Show with Jimmy Fallon. Yamaneika has performed at the Just For Laughs festival in Montreal, The Half Hour on Comedy Central, and recently filmed a half-hour stand-up special for Netflix. Yam currently stars on VH1’s Talk 30 To Me and Bravo’s Kandi Koated Nights. You can listen to her weekly on her hit podcast Rantin' and Ravin'.

Talkhouse (Live), Talkhouse curates musicians, actors, filmmakers, and others in their respective fields to speak one-on-one with their peers via the Talkhouse Podcast and Talkhouse Live events. The Talkhouse Podcast offers listeners a unique insight into the creative work of creators across all genres and generations.

Josh Gondelman, is a writer and comedian who incubated in Boston before moving to New York City, where he currently lives and works as a writer and producer for Desus and Mero on Showtime. Previously, he spent five years at Last Week Tonight with John Oliver, first as a web producer and then as a staff writer. Onstage, Josh charms audiences using his good-natured storytelling and cracks them up with his sharp, pointy wit. He takes topics from surprise parties to his experience teaching preschool and makes them all equally hilarious. He made his network tv debut on Late Night With Seth Meyers (NBC) and he was most recently seen on The Late Late Show with James Corden.

Moses Storm, Moses is a talented comedian and actor who can be seen on the upcoming NBC comedy Sunnyside, from Mike Schur and Kal Penn. On television, you may have seen him in I’M DYING UP HERE on Showtime, ARRESTED DEVELOPMENT for Netflix and THIS IS US on NBC. Film credits include the 2015 high-concept Universal horror film Unfriended, and the Adam Sandler Netflix film FATHER OF THE YEAR. In late night, he has appeared twice as a performer on CONAN, including one visit where he was both the performer and only guest for the evening. He hosts Conan O'Brien's live variety show 'Team Coco’s Up & Up' at the Dynasty Typewriter Theater in LA and joined Conan for his first multi city live tour in 8 years in late 2018 titled the “Team Coco Presents Conan & Friends: An Evening of Stand-Up and Investment Tips.” In 2015, he had the prestigious honor of being chosen as a “New Face” at the Just for Laughs comedy festival in Montreal.

Molly Austin, a writer/performer and stand-up, Molly Austin broke into the comedy zeitgeist with her comedic music videos on TruTV’s Late Night Snacks. In 2018, Molly was one of 14 stand-ups selected for Comedy Central’s UP NEXT at Clusterfest. She can also be seen as one of the stand-up comics on this past season of Laff Mobb's Laff Tracks and was recently a writer and producer on Viceland's evening talk show, Vice Live. She recorded her first comedy album this June in New York City.

Bo Johnson, is a comedian from Seattle, Washington. His stand up appeared on season two of Kevin Hart Presents: Hart of the City on Comedy Central. In 2018 he taped a set for LOL Live! at the prestigious Just For Laughs comedy festival in Montreal. Bo was a featured performer in the 2017 and 2018 Bumbershoot Music & Arts Festival, a finalist in the 39th annual Seattle International Comedy Competition, and a performer in the Double Down Comedy Experience sponsored by Zappos. His prank video “Bo and Mathew Sneak into a Movie Theatre” went viral on Youtube and has also been seen on MTV’s Ridiculousness and NBC’s Caught on Camera with Nick Cannon.

The Emo Night Tour, imagine going to a show and hearing Taking Back Sunday,Fall Out Boy , Panic! At The Disco, My Chemical Romanceand many more, all only playing their Best Songs...ALL Night Long. Welcome to The Emo Night Tour.The Emo Night DJ’s will be spinning all the angst your teenage dirtbag heart desires all night long and will make you feel like you’re at Warped Tour ‘08 minus all the dust and melting in the sun!

Jonathan Van Ness, an Emmy-nominated television personality, podcaster and celebrity hairstylist who can be seen starring on Netflix’s Emmy Award-winning reboot series Queer Eye. His biweekly podcast, “Getting Curious” was listed as one of the Top Podcasts of 2018 by Time Magazine and recently won the iHeart Radio Award for Best LGBTQ Podcast. This year he embarked on his first worldwide comedy tour, and is set to release his revelatory memoir Over The Top next month.

Desus & Mero, also known as The Bodega Boys, are former Bronx schoolmates who have taken over the podcast world and more-recently, the late-night television game with their new weekly show on Showtime, the network’s first late-night program. The duo also contributed their voices to the Netflix animated series Neo Yokio alongside Jaden Smith, Susan Sarandon and Jude Law.