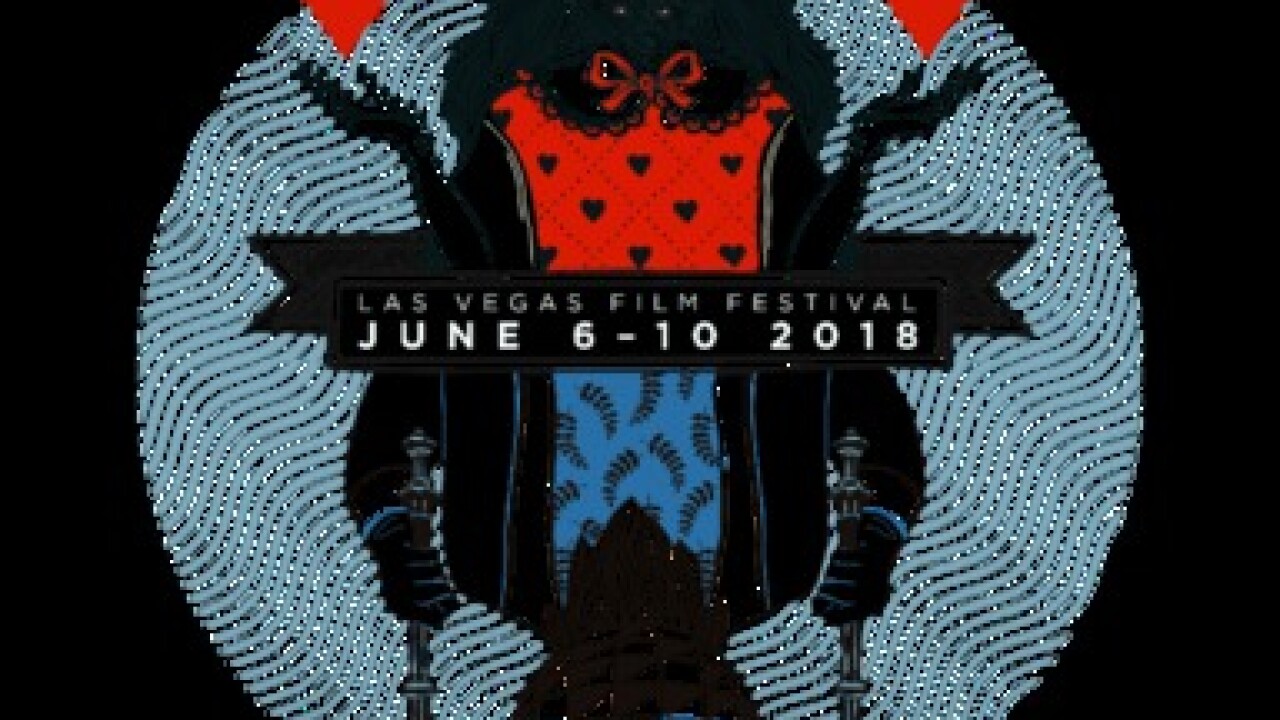 The 11th Annual Las Vegas Film Festival, partnered with CineVegas, has announced its initial programming lineup for the 2018 Festival to be held at Brenden Theatres and Palms Casino Resort June 6–10.

The lineup includes a mix of feature films and documentaries that have been favorites on the international festival circuit, as well as new additions to this year’s Festival - live discussions and live comedy. 2018 also marks the first year with seasoned film festival programming veteran Mike Plante serving as the Festival’s Captain of Strategy.

I Am Not a Witch / United Kingdom – (Director and Screenwriter: Rungano Nyoni; Producers: Juliette Grandmont and Emily Morgan) When eight-year-old Shula turns up alone and unannounced in a rural Zambian village, the locals are suspicious. A minor incident escalates to a full-blown witch trial, where she is found guilty and sentenced to life on a state-run witch camp. There, she is tethered to a long white ribbon and told that if she ever tries to run away, she will be transformed into a goat. As the days pass, Shula begins to settle into her new community, but a threat looms on the horizon. Soon she is forced to make a difficult decision – whether to resign herself to life on the camp, or take a risk for freedom. Cast: Maggie Mulubwa, Henry B.J. Phiri, Nancy Mulilio

Nancy / U.S.A. (Director and Screenwriter: Christina Choe; Producers: Amy Lo, Michelle Cameron, Andrea Riseborough) – NANCY is a provocative psychological thriller about love, intimacy, and trust – and what happens when lies become truth. Craving connection with others, Nancy creates elaborate identities and hoaxes under pseudonyms on the internet. When she meets a couple whose daughter went missing thirty years ago, fact and fiction begin to blur in Nancy’s mind, and she becomes increasingly convinced these strangers are her real parents. As their bond deepens, reasonable doubts give way to willful belief – and the power of emotion threatens to overcome all rationality. Cast: Andrea Riseborough, J. Smith-Cameron, Steve Buscemi, Ann Dowd, John Leguizamo

Sadie / U.S.A. (Director: Megan Griffiths; Producers: Lacey Leavitt and Jennessa West; Executive Producer: Eliza Shelden) – While her father is away serving in the military, Sadie (Sophia Mitri Schloss) battles to preserve his place on the home front when her mother, Rae (Melanie Lynskey,) takes an interest in a new man, Cyrus (John Gallagher, Jr.) When Sadie sees the relationship developing, she pledges to come between them, whatever it takes. Cyrus becomes the enemy, and if she’s learned nothing else from the world she inhabits, it’s that the enemy deserves no mercy. Cast: Sophia Mitri Schloss, Melanie Lynskey, John Gallagher, Jr., Danielle Brooks, Tony Hale

When She Runs / U.S.A. (Directors: Robert Machoian and Rodrigo Ojeda-Beck; Producer: Laura Heberton) – A young mother of limited means puts everything on the line to pursue her dream of becoming a competitive runner. Her marriage failing, exhausted and broke, Kirstin has left her husband, Ivan, and their very young son, Jonah, seeking refuge across town. When She Runs follows Kirstin through the last day before the trial that could change her life forever. Cast: Kirstin Anderson, Ivan Gehring, Jonah Graham.

DOCUMENTARY FILMS
John McEnroe: In the Realm of Perfection / U.S.A. (Director and Screenwriter: Julien Faraut; Producers: William Jehannin and Raphaelle Delauche) – Written and directed by Faraut and narrated by Mathieu Amalric, John McEnroe: In the Realm of Perfection revisits the rich bounty of 16-mm-shot footage of the left-handed tennis star John McEnroe, at the time the world’s top-ranked player, as he competes in the French Open at Paris’s Roland Garros Stadium. Close-ups and slow motion sequences of McEnroe competing, as well as instances of his notorious temper tantrums, highlight a “man who played on the edge of his senses.” Far from a traditional documentary, Faraut probes the archival film to unpack both McEnroe’s attention to the sport and the footage itself, creating a lively and immersive look at a driven athlete, a study on the sport of tennis and the human body and movement, and finally how these all intersect with cinema itself.

Minding the Gap / U.S.A. (Director and producer: Bing Liu, Producers: Diane Quon and Joshua Altman) - First-time filmmaker Bing Liu’s documentary Minding the Gap is a coming-of-age saga of three skateboarding friends in their Rust Belt hometown hit hard by decades of recession. In his quest to understand why he and his friends all ran away from home when they were younger, Bing follows 23-year-old Zack as he becomes a father and 17-year-old Keire as he gets his first job. As the film unfolds, Bing is thrust into the middle of Zack’s tumultuous relationship with his girlfriend and Keire’s inner struggles with racial identity and his deceased father. While navigating a complex relationship between his camera and his friends, Bing explores the gap between fathers and sons, between discipline and domestic abuse, and ultimately that precarious chasm between childhood and becoming an adult. Cast: Zack Mulligan, Keire Johnson, Bing Liu, Nina Bowgren, Kent Abernathy

Narcissister Organ Player / U.S.A. (Director: Narcissister) — American performance artist Narcissister takes a smart, sassy, spectacle-rich approach to exploring the kinds of sexual fetishism that notoriously fix racial and gender stereotypes. She combines unabashed eroticism, humor, and poignancy to stretch viewers’ sensibilities and achieve surprising psychic effects. Narcissister Organ Player is originally a Bessie Awards–nominated performance that takes place in a metaphorical restaurant where Narcissister, unsated by a few spinach leaves, tries to eat the restaurant furniture and ends up “consuming herself” by entering and traveling through her own body, represented by an enormous onstage puppet. As the performance plays out on stage, in real life, her mother’s long-term illness brings on a decline that ends in death. The artist’s loss provokes an exploration of how her own complex, interracial family history has compelled her to create the masked, erotic performance character Narcissister.

Sammy Davis Jr.: I’ve Gotta Be Me / U.S.A. (Director: Sam Pollard; Screenwriter and Co-Producer: Laurence Maslon; Executive Producer and Producer: Michael Kantor; Producer: Sally Rosenthal) - Sammy Davis, Jr.: I’ve Gotta Be Me is the first major film documentary to examine Davis’ vast talent and his journey for identity through the shifting tides of civil rights and racial progress during 20th-century America. Featuring new interviews with such luminaries as Billy Crystal, Norman Lear, Jerry Lewis, Whoopi Goldberg and Kim Novak, with never-before-seen photographs from Davis’ vast personal collection and excerpts from his electric performances in television, film and concert, Sammy Davis, Jr.: I’ve Gotta Be Me explores the life and art of a uniquely gifted entertainer whose trajectory blazed across the major flashpoints of American society from the Depression through the 1980s.

LIVE EVENTS
Bobcat Goldthwait and Friends Live – Veteran film director Bobcat Goldthwait first came to CineVegas with Windy City Heat in 2004 and brought his first film Shakes the Clown to the Las Vegas Film Festival two years ago. Now he returns to the stage in Vegas for some much-needed comedy.

Christine Vachon in Conversation with Mary Ann Marino - The Black Mountain Institute will sponsor a live discussion with acclaimed producer Christine Vachon, who co-founded Killer Films with Pamela Koffler in 1995. Since then, they have produced over 100 films including: Carol (nominated for six Academy Awards), Far From Heaven (nominated for four Academy Awards), Still Alice (Academy Award winner), Boys Don’t Cry (Academy Award winner), and I’m Not There (Academy Award nominated). Killer also produced Z: The Beginning of Everything for Amazon Studios, as well as Todd Haynes’ latest film, Wonderstruck. Mary Ann Marino is a longtime producer and current head of physical production for Amazon Studios.

An Evening With Don Hertzfeldt / U.S.A. (Director and Screenwriter: Don Hertzfeldt) — The highly anticipated follow-up to Don Hertzfeldt's "World of Tomorrow" finds Emily Prime swept inside the brain of an incomplete back-up clone of her future self, who's on a mission to reboot her broken mind. Continuing the tradition of the first film, "World of Tomorrow Episode Two" was written entirely around candid audio recordings of Hertzfeldt's five-year-old niece. Cast: Julia Pott and Winona Mae

The Rudy Casoni Boozebag Revue – The Rudy Casoni Boozebag Revue returns to Las Vegas. Sinatra's Singing Bastard brings his drunken and dangerous lounge act to Fremont Street. See him croon the standards and selected punk covers with his swing band as his show of comedians and low rent, dumdum, variety acts, careens off the rails and slams headfirst into a rat pack nightmare. Cast: Toby Huss, Mark Fite, Billy the Mime, Pat Healy, and the Dago5 Band and featuring mostly nude dancers who are mostly women.

Special events, additional screenings and the Festival schedule will be announced in the coming weeks.

Individual tickets for screenings and live comedy events are on sale at www.lvff.com, and in person at the LVFF Box Office, located at Brenden Theatres at Palms Casino Resort. Film and live comedy tickets are $15 each. Student and senior tickets are available for $10 each, and are only available for purchase in person at the LVFF Box Office with a valid student or government issued ID.

For additional information on passes and tickets, please visit www.lvff.com, or email the Box Office Manager at BoxOffice@lvff.com.