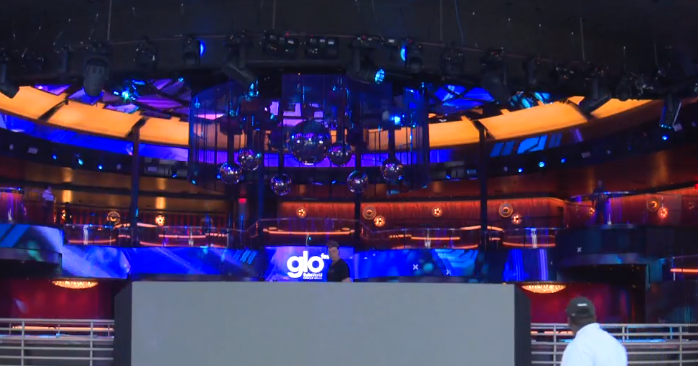 Numerous celebrities turned out for the red carpet event and the celebrations are expected to continue throughout the weekend.

More information about the opening weekend events are here.

ORIGINAL STORY
LAS VEGAS (KTNV) -- We are getting our first look at KAOS Nightclub and Dayclub that is opening this weekend at The Palms hotel-casino.

The multi-level 73,000-square-foot dayclub boasts the highest number of pools of any resort in North America. There are two main pools with numerous side pools. It was designed by the award-winning design firm Friedmutter Group Las Vegas.

A 60-foot bronze sculpture by Damien Hirst titled "Demon with Bowl" rises from the center of one of the pools. The pool area also features a 23-foot tall sculpture named "The Warrior and the Bear" and the largest LED wall in Las Vegas (270 feet tall) that runs the length of the eastern exterior of the Ivory Tower.

The pool area also has 39 unique cabanas, most with their own pool. The dayclub can accommodate up to 5,000 guests and has a seasonal dome cover that will allow it to operate on a year-round basis.

The menu at the pool will feature comfort foods such as tostada breakfast wrap, watermelon salad, truffle chicken sandwiches and more. There will also be a wide variety of cocktails including classic Bloody Marys and frozen KAOS daiquiris.

For those enjoying a private cabana during KAOS Dayclub, a group platter menu will be offered. The menu features an array of platters , including a SUSHIYACHT of artisan rolls, nigiri, sashimi, summer rolls, and dipping sauces, that are designed to serve a party of 10.

The 29,000-square-foot nightclub features an opulent theme merged with state-of-the-art technology. The nightclub will utilize first-of-its-kind technology to enhance interaction and storytelling and create an immersive experience.

In addition, the nightclub has a rotating 360-degree DJ booth that allows talent to play to both indoor and outdoor crowds, while the dayclub has its own separate entertainment stage in order to provide for multiple performance locations and a six-part, custom Tesla coil ceiling above the heart of the dance floor adds a production element unlike any other with Midi Codec programming for arc pitch, length and directional control allowing the system to “play” a song.

Palms is also announcing over-the-top experiences, such as KAOS Theory, a $1M weekend package, inclusive of a 3-night stay in Damien Hirst-designed “Empathy Suite” (the most expensive suite built in the world) along with multiple rare large format bottles of Ace of Spades and Dom Perignon.

RELATED: One of the world's most expensive suites now available at The Palms in Las Vegas

Other experiences include personalized champagne valet service (individually prices at $6,000 or greater); the opportunity to fire water cannons in the pool area for $100,000; the Create KAOS nightclub package for $100,000, which includes opportunity to activate the Tesla coils; and Own the Strip package (LED takeover) for $50,000.

The grand opening celebration is happening this weekend. Weekend entertainment includes Alicia Keys, Travis Scott and Skrillex, Cardi B with J Balvin and G-Eazy, and the Zac Brown Band.