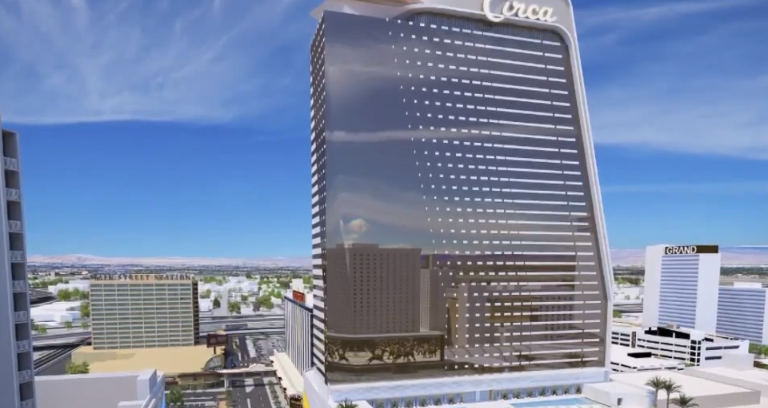 Reservations are being accepted beginning Dec. 28. A two-night stay is required if you book that date. According to the hotel's website, the cheapest room is $299 per night or approximately $740 for 2 nights with taxes and a resort fee.

It's official, booking is opened for @CircaLasVegas ... and here are the rooms available for when the hotel portion opens pic.twitter.com/LoQRPF9qO2

If looking to book a hotel room on New Year's Day, the cost jumps to $699 for the basic room. However, guests may book just one night.

Designed by Steelman Partners and Circa’s Director of Design and Architecture Alice O’Keefe, Circa’s uniquely tapered 71-degree tower – the tallest building north of the Strip – will deliver unobstructed views of either the iconic Las Vegas skyline, surrounding mountains or the resort’s pool amphitheater in Circa’s 777 rooms and suites.

GALLERY: Rooms and suites at the new Circa Las Vegas

Setting a new Las Vegas standard, each of Circa’s standard rooms will have Serta Prestige king mattresses, including double-bed rooms. Flex options will enable Circa’s hotel staff to configure rooms to meet guests’ specific needs and coordinate bed arrangements for groups of varying sizes. All rooms will come equipped with a digital tablet that will act as a one-stop-shop for checking restaurant menus, booking reservations for Circa’s sportsbook and pool, and even controlling the room’s light settings.

ORIGINAL STORY
The new Circa Las Vegas, which is scheduled to begin opening Oct. 28, had announced it will be for adults only.

The property posted an announcement on social media on Monday. It says, "Once, Las Vegas held a certain mystique as this fabulous place where only grown-ups could play. Call us old-fashioned, but we think adults need some of that mystique back in their lives. Book your room starting June 24th at 9am for #CircaLasVegas, a 21+ experience.”

Once, Las Vegas held a certain mystique as this fabulous place where only grown-ups could play. Call us old-fashioned, but we think adults need some of that mystique back in their lives. Book your room starting June 24th at 9am for #CircaLasVegas, a 21+ experience. pic.twitter.com/HBW5gweARn

The property, owned by Derek Stevens, will open its casino, sportsbook and restaurants on Oct. 28. The hotel tower is scheduled to open in December.

Stevens also owns the D Las Vegas and Golden Gate and they will continue to allow children. Additionally, Barry’s Downtown Prime at Circa will allow patrons under 21.

Circa is the first ground-up hotel and casino to be built since the Lucky Dragon on Sahara Avenue opened in 2016.

In the early 2000s, most properties and officials decided it was time to return to a more adult theme. Sexy revue shows became the norm and after Sept. 11, then Mayor Oscar Goodman encouraged everyone to “go out and have a lap dance.”

Even now, it is not unusual to see children in strollers being wheeled through the various properties or on Fremont Street during the late evening hours.