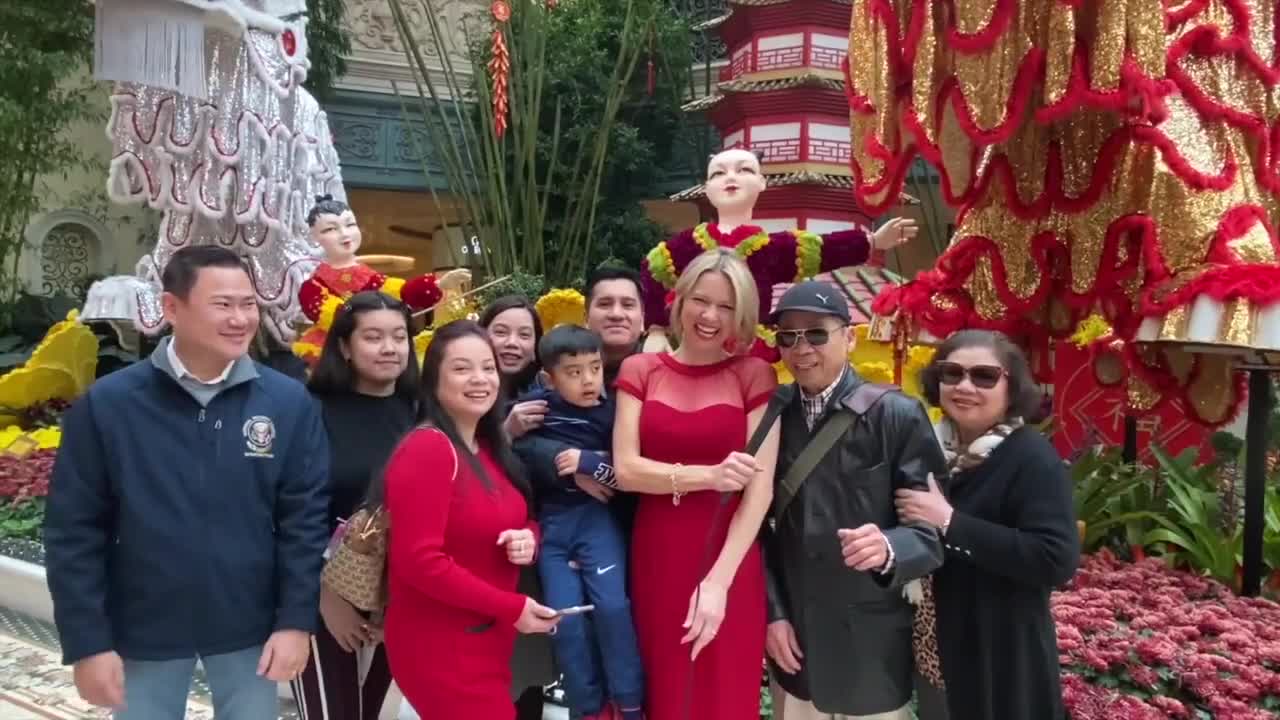 Info on Chinese and Lunar New Year celebrations, a fundraiser event for Australia, comedy at Topgolf, hip-hop and poetry at Bunkhouse Saloon, Sake in the Alley. Tyler Henry at the Palms, and special guests at Kenny Davidsen's Bow Tie Cabaret.

1. The Bellagio Conservatory & Botanical Garden is celebrating the Year of the Rat with a special display through March 7. The display features a giant, gilded gold rat, 20-foot gold coin trees, Chinese lions, a fountain and pond with fish, jade coins, frolicking Chinese children, thousands of flowers and more. The conservatory is open 24/7 and there is no admission charge (first hour of parking at Bellagio is free).

2. Many restaurants are celebrating the Chinese or Lunar New Year with specials, including China Poblano at The Cosmopolitan. The special menu features scallop and pork dumplings, fried whole seasonal fish, seasonal greens with fried tofu, and more.

3. The Breakthrough Art Gallery is hosting "Artists for Australia" from 6 to 11 p.m. Jan. 24 at the Rio hotel-casino. The event will feature artists like Riot, Sixto, Jeff Lewis, Jevon Daly, David Daze, Freddy Fingers and more. There will also be a silent auction.

4. Lisa Marie and Scott Foster Harris are performing during Kenny Davidsen's Bow Tie Cabaret on Jan. 24. The couple performs together as Orchids Bloom and met in a recording studio in Vienna, Austria. Kenny and the band start playing around 8:45 p.m. in the lounge at Tuscany Suites on East Flamingo Road.

5. Comedian Joe Kwaczala is performing at Topgolf Laughs Jan. 24 and 25. The comedian, who is from Pittsburgh, started doing comedy in Pittsburg and now lives in Los Angeles. In 2017, he was chosen to be on Comedy Central's "Up Next" and his Comedy Central Stand-Up Presents is airing in 2019. He also appears on the nationally-syndicated public radio show "Live Wire."

6. The Bunkhouse in downtown Las Vegas is hosting a hip-hop and poetry night Jan. 24. There will be live performances and an open cypher at the beginning of the show. At this time, any artist in attendance can come up on stage to perform a 16-bar verse or quick freestyle.

8. Sake in the Alley is taking place 5 to 8 p.m. Jan. 25 in downtown Las Vegas across from Fergusons Downtown. There will be cocktails, neat pours and surprise tastings from Japan. The night will kick off with a local collaboration with a neighborhood mixologist and a select bottle of sake.

10. Human Nature is donating 100% of their ticket sales to their show "Human Nature Sings Motown & More" on Jan. 25 to the Australian bushfires relief cause. The show is presented Tuesdays through Saturdays in The Sands Showroom at The Venetian.

11. Clairvoyant medium Tyler Henry of E! Television Network's "Hollywood Medium" fame is presenting "An Evening of Healing, Hope and Closure" on Jan. 25 in The Pearl at Palms hotel-casino. Show time is at 8 p.m. Tyler first rose to fame after he appeared on "Keeping Up with the Kardashians" in 2015. He also talked to Alan Thicke about heart problems several months before he died.

12. Lovelady Brewing in Henderson is hosting a Mario Kart tournament from 7 to 9 p.m. Jan. 29. Compete for awesome prizes while enjoy Lovelady beers.

13. The world premiere of "RuPaul's Drag Race Live!" is happening Jan. 30 and 31 at Flamingo Las Vegas. The new show will feature some of the most famous drag queens in the world. Each performance will feature outrageous comedy, eye-popping fashions, over-the-top singing and dancing and more. Directed by RuPaul and award-winning choreographer and filmmaker Jamal Sims.

If you would like to submit an item for an upcoming 13 Things, send an email with details and photos to joyce.lupiani@ktnv.com.

BONUS EVENT
For the 29th year, Mecum Auctions’ annual vintage and antique motorcycle auction will return to South Point Arena and Equestrian Center’s Priefert Pavilion on Jan. 21 through Jan. 26 with an estimated 1,750 motorcycles expected to cross the auction block. The event is recognized as the largest global familial-like gathering of consignors, buyers and spectators who share a passion for the history, beauty and camaraderie invoked and inspired by vintage and antique motorcycles. An additional 450 items will be offered through Mecum On Time, Mecum Auctions’ online-only auction platform. The lots include toys, tin and neon signs, globes, oil cans, tools and other items. . Doors open daily at 8 a.m. with the auction beginning at 1 p.m. Jan. 21, and at 10 a.m. Jan 22 through Jan. 26. Portions of the event will be broadcast on NBC Sports Network.