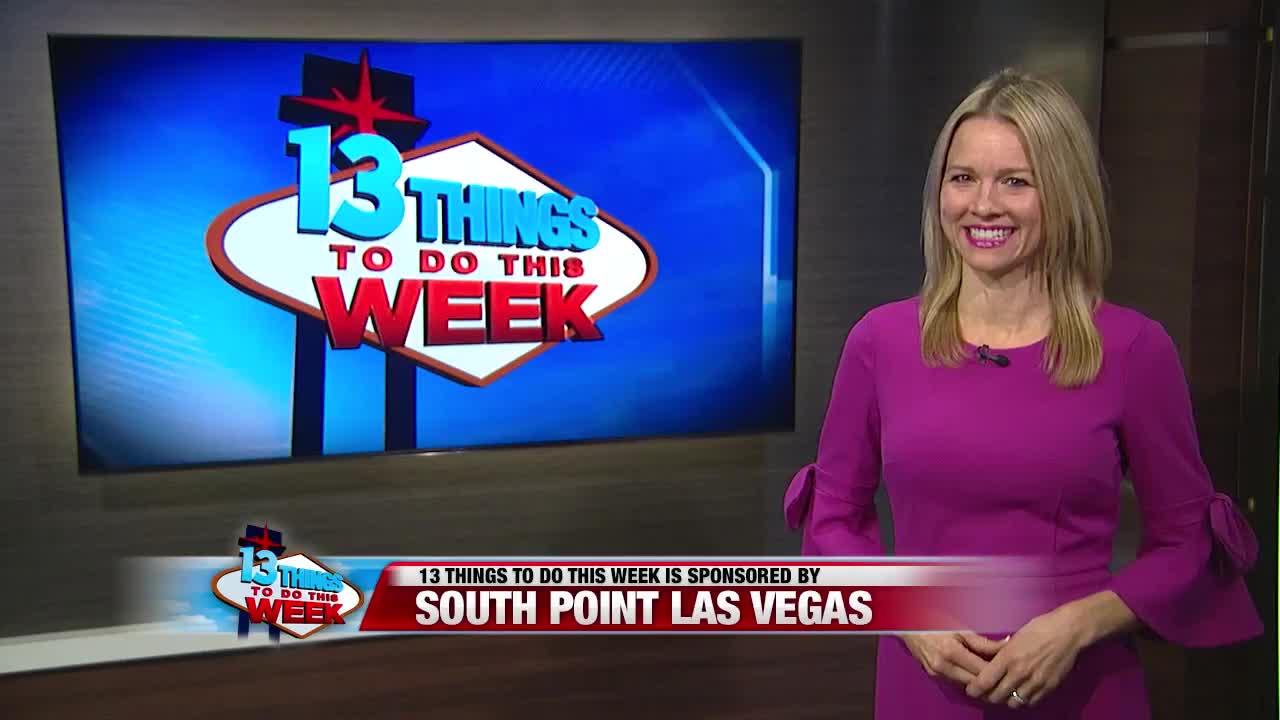 1. The Aquatic Springs Pool on Fort Apache Road is hosting Frozen Friday with games and crafts, an obstacle course, a cute photo op and a movie by the pool from 3 to 7 p.m. Admission is $3 for adults, $2 for kids and $1 for seniors.

3. The top-selling female country artist of all-time, Shania Twain, returns to the Las Vegas Strip this weekend with her show "Let's Go!" inside Zappos Theater at Planet Hollywood. There are show dates in December and March, May and June of next year.

4. The Wrangler National Finals Rodeo is back in town for 10 days. The main rodeo action is happening at the Thomas & Mack Center although there are events at the South Point hotel-casino and at the Plaza in downtown Las Vegas. Cowboy Christmas is happening at the convention center with hundreds of exhibitors.

5. Grab your ice skates and head to The Ice Rink at The Cosmopolitan hotel-casino on Dec. 6 for a chance to skate with Alex Tuch, Nate Schmidt and Ryan Reaves with Vegas Golden Knights. Chance the Gila monster and the Knights Guard will also be there. You can also rent skates there.

6. The Mariachi Winter Festival is happening Dec. 6 at Clark County Library. The festival will feature the best and brightest groups from local middle and high schools playing mariachi favorites as well as interpretations of holiday classics mariachi style. The festival is free and open to the public.

7. Poo-Pourri's Giant Poo Tour is making a stop at downtown's Lyft Park Dec. 6-8. The tour is billed as a "transformative, fully immersive, 360-degree experiences that pushes out the bad sh*t, makes room for the good sh*t and leaves you feeling like THE sh*t." Guests enter a giant inflatable poo emoji and sit on "toilets" inside for a transformational experience full of sights, sounds and smells.

8. Jordance Studios is presenting a one-of-a-kind production titled "The Nutcracker with a Latin Twist" on Dec. 6 and 7 at West Las Vegas Library. The classic holiday show will feature the familiar dances including, the Russian Dance, Dance of the Sugar Plum Fairies, along with some added salsa flair. The annual production is a full-length show featuring dancers from across the valley from youth to adults. Dress rehearsal night will also benefit local nonprofits. General admission is $25 with discounts for seniors and kids.

9. The 15th annual Great Santa Run is happening Dec. 7 in downtown Las Vegas. Join thousands of people dressed as Santa to participate in the annual event which raises funds and awareness for Opportunity Village's programs and services. A'Ja Wilson and Jackie Young with the Las Vegas Aces are this year's co-grand marshals. Mayor Carolyn Goodman and Oscar Goodman will also be present along with the Chippendales, various Las Vegas sports mascots, the Del Sol Academy Dragon Fire Marching Band and more.

10. Deana Martin, daughter of iconic entertainment Dean Martin, will take her audience on a musical sleigh ride of classic and contemporary yuletide tunes in her festive, holiday show on Dec. 8 at The Smith Center for the Performing Arts. Songs will include "Winter Wonderland," "I'll Be Home For Christmas," and "Baby It's Cold Outside," alongside swinging hits such as "Gee Baby Ain't I Good To You" and "The Lady Is a Tramp."

11. Mondays Dark and host Mark Shunock are celebrating 6 years in the Pearl Concert Theater at the Palms hotel-casino on Dec. 9. Guests are invited to enjoy a night of entertainment starring Vegas’ top entertainers and bid on luxurious live and silent auction items including art, show and concert tickets, dining packages, spa treatments, jewelry, and more. The celebration continues inside Greene St. Kitchen for the after party of a lifetime. Tickets start at $20.

12. Las Vegas resident and artist KAI is being featured in a pop-up art gallery Dec. 10-11, 13 and 22 at Tivoli Village. KAI will be offering up her own private art collection for sale to benefit several Las Vegas charities. KAI will also be honoring 4 Las Vegas women who represent various charities with 30x40 portraits of each (valued up to $50,000) that will be unveiled at the event.

13. The Mob Museum is hosting "Fact, Fiction and the Irishman: The Hoffa Murder" on Dec. 11 with veteran journalists Eric Shawn, Dan Modea and Vince Wade, who will detail facts regarding Jimmy Hoffa's death and address theories that persist to this day. The new Martin Scorsese film, “The Irishman” presents one possible scenario: Mob hit man Frank “The Irishman” Sheeran killed the former Teamsters Union president. Experts who have studied the Hoffa case for decades are skeptical Sheeran pulled the trigger. The panel will dissect the Hoffa mystery, separating fact from fiction in pursuit of what really happened on July 30, 1975.

Country music star Aaron Watson will take the Showroom stage at the South Point and perform original country hits Dec. 5-8 sure to get guests dancing the night away. Watson made history in 2015 when he became the first independent male artist to debut at number one on the Billboard Top Country Albums chart with his self-released and independently distributed and promoted album “The Underdog.” Upcoming country music sensation Josh Ward performs Dec. 9-11 and singer and songwriter Randall King performs Dec. 12-14.

If you would like to submit an item for 13 Things, send an email with details and photos to joyce.lupiani@ktnv.com.