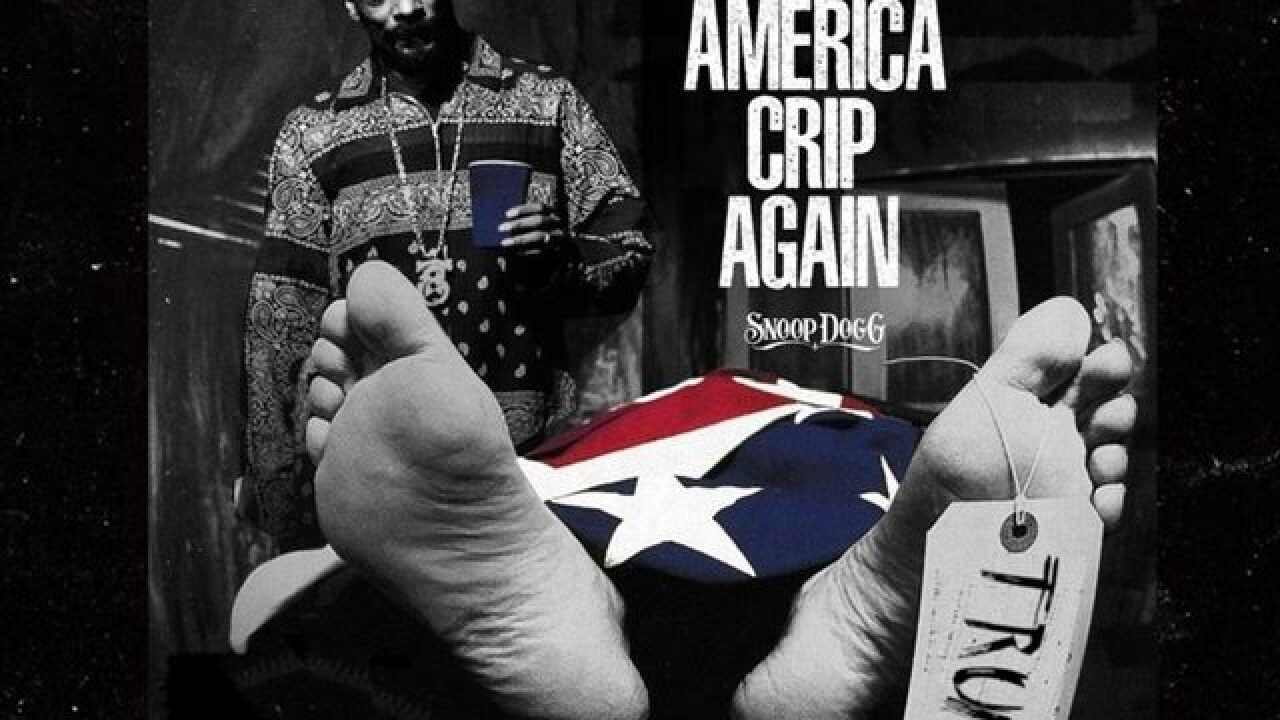 Hip-hop is going hard at President Donald Trump, and Snoop Dogg is the latest rapper to step into the ring — his newest album's cover shows an image of the rapper standing over a dead body that resembles Trump.

The image, posted to Instagram earlier this week, was later removed. The post follows controversy in March when Snoop Dogg put out a music video in which he pointed a toy gun at a clown that looked like the president and was named Ronald Klump. Trump tweeted about it.

Can you imagine what the outcry would be if @SnoopDogg, failing career and all, had aimed and fired the gun at President Obama? Jail time!

Snoop Dogg accused the President of neglecting various communities in America, voiced his support for San Francisco 49ers quarterback Colin Kaepernick and called on black athletes to form their own football league in the title track of his forthcoming album, "Make America Crip Again."

Last week, Eminem unleashed on the President in a four-and-a-half minute freestyle rap amid mounting attacks on Trump from artists, who have criticized his administration over issues such as criminal justice reform and police brutality, attacks against NFL players for protesting during the National Anthem, and the President's response to the white supremacist rally in Charlottesville, Virginia, in which he blamed the violence on "fine people" on "both sides."

"As I look around, I see so many millionaires with skin like mine. Don't pretend like I'm with that bulls--- your President been tweeting. Them black boys is ballin' out, the whole block been eating," Snoop Dogg raps, seemingly referencing the fact that the majority of NFL players are black.

"Ima line ya'll on up, then start my own league. Ima sign ya'll on up," he adds. "I'm thinkin who my heroes be. Thank God for the negro league. Colin Kaepernick was blackballed, oh n-----, please. This still America with three K's, believe that s---."

In a statement shared by his representative, Snoop Dogg said that the song is "not a statement or a political act: it's just good music."

The rapper also explained his reference to the Crips, saying that their original purpose was not gang activity but to be "the reflection of the Black Panthers" — an African American revolutionary party founded in the 1960s in Oakland, California, to fight police brutality in a segregated America.

The Long Beach rapper said his call for black players to form their own league makes a larger point that goes beyond sports: If the administration doesn't represent the African American community, its members should band together.

"Certain people feel like we should make America 'great again,' but that time they're referring to always takes me back to separation and segregation, so I'd rather Make America Crip Again. What I mean by that is, in my lifetime, that's when young black men in impoverished areas organized to help their communities and to take care of their own because society basically left them for dead," Snoop Doog said.

"A lot of people glorify the gang banging and violence but forget that in the beginning, the Crip's main and sole purpose was to be the reflection of the Black Panthers," he added. "They looked after kids, provided after school activities, fed them and stepped in as role models and father figures."

A representative explained in a press release that "Make America Crip Again" is a response to the Trump administration neglecting various communities and is a call for the community "to look after itself," adding that the rapper's intention is to "unite, not divide."