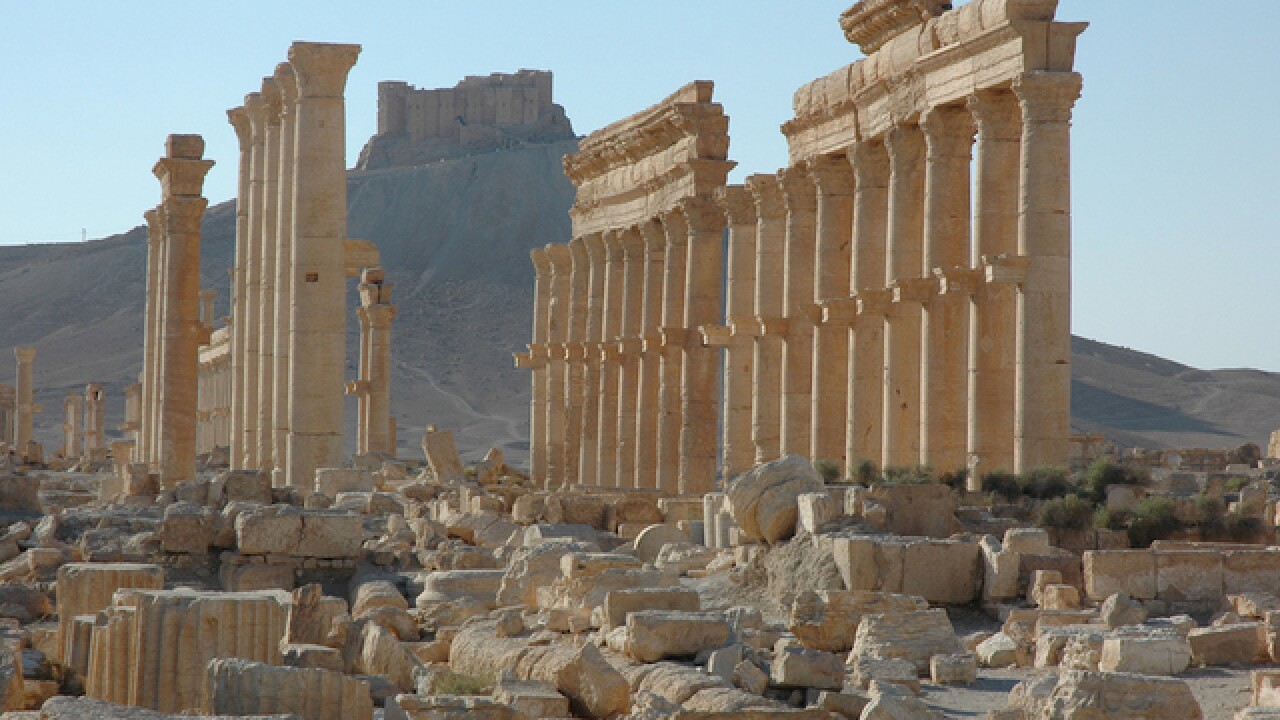 DAMASCUS, Syria (AP) — Syrian government forces, backed by Russian airstrikes, on Thursday pushed into the ancient town of Palmyra, which has been held by the Islamic State group since May, state TV reported.

The advance came after the troops managed this week to capture several hills and high ground around the town, famed for its priceless archaeological site and Roman ruins. Syrian troops have been on the offensive for days in an attempt to capture the town.

The state TV broadcast footage of its reporter, embedded with the Syrian military, speaking live from the entrance of Palmyra and saying that as of midday Thursday, the fighting was concentrated near the archaeological site on the southwestern edge of the town.

Cracks of gunfire and explosions echoed as the reporter spoke. The TV also aired footage showing soldiers walking and SUVs driving near a building that appears to have been a hotel.

An unnamed Syrian soldier told the station he had one message for the Islamic State group: "You will be crushed under the feet of the Syrian Arab Army."

Recapturing the town, a UNESCO world heritage site, would be a significant victory for Syria's army and its Russian allies. Russia withdrew most of its forces and aircraft from Syria last week after a months-long bombing campaign that succeeded in turning the tide of the war again in President Bashar Assad's favor.

Turkey-based activist Osama al-Khatib, who is originally from Palmyra, denied that Syrian troops had entered the town. He said they were still on the edge of Palmyra and that the video seen on Syrian state TV shows teyh area about 5 kilometers (3 miles) from Palmyra.

Earlier in the day, Gov. Talal Barazi told The Associated Press from the nearby city of Homs that the Syrian army has determined three directions to storm Palmyra and was clearing all roads leading into the town of mines and explosives.

"We might witness in the next 48 hours an overwhelming victory in Palmyra," Barazi said over the phone, adding that "the army is advancing in a precise and organized way to protect what is possible of monuments and archaeological sites."

The Britain-based Syrian Observatory for Human Rights said Syrian troops and Shiite militiamen helping them on the ground were facing tough resistance from IS extremists as they try to penetrate the town's limits.

The Observatory, which monitors the Syrian conflict through a network of activists on the ground, said the IS lost over 200 militants since the government campaign to retake Palmyra began 17 days ago. It did not have figures for government losses.

In neighboring Lebanon, the Al-Manar TV station, which belongs to the militant Hezbollah group that is fighting with Syrian troops, reported that Syrian government forces were in full control of the hotels area and farms on the western edge of Palmyra on Thursday.

Palmyra attracted tens of thousands of tourists to Syria every year and is affectionately known by Syrians as the "bride of the desert." In a big blow to the government, it was overrun by the Islamic State group last May.

In Palmyra, the IS destroyed many of the town's Roman-era relics, including the 2,000-year-old Temple of Bel and the iconic Arch of Triumph, and also killed dozens of captive Syrian soldiers and dissidents from IS in public slayings at the town's grand roman theater and other ruins.

Along with blowing up priceless archaeological treasures, among the first destructions IS carried out in Palmyra was the demolishing of the town's infamous Tadmur prison, where thousands of Syrian government opponents had been imprisoned and tortured over the years.

The advance on Palmyra comes against the backdrop of Syrian peace talks underway in Geneva between representative of the Damascus government and the Western-backed opposition. The talks, which have been boosted by a Russia-U.S.-brokered cease-fire that has mostly held since late February, were to adjourn on Thursday — without having achieved any apparent breakthroughs.

The negotiations are scheduled to resume later in April.

In Moscow, U.S. Secretary of State John Kerry called on Thursday for countries to boost efforts to fight IS in Syria, Iraq and beyond in the wake of this week's deadly attacks in Brussels. He said the Brussels attack should put nations on notice that the terror threat emanating from the Middle East must be stopped.

Kerry is in Moscow for talks with Russian President Vladimir Putin and Foreign Minister Sergey Lavrov on Syria, Ukraine and the Brussels attacks. He will be seeking clarity from Putin and Lavrov as to where Russia stands on a political transition for Syria, particularly on the issue of Assad's future.

Despite its recent drawdown in Syria, Moscow has said it is keeping its bases in Syria and would continue to carry out airstrikes against the Islamic State group and other extremists. The Russian air force has supported the Assad government advance with a fierce campaign of air strikes.

Meanwhile, the U.N. chief arrived in Lebanon on Thursday for a two days visit during which he is expected to meet top Lebanese officials and discuss regional matters. Lebanon, which has taken in over 1 million Syrian refugees, is also host to a U.N. peacekeeping force that maintains security along the Lebanese-Israel border.

Ban is expected to address refugee support, youth unemployment, and private sector development. He will visit a Syrian refugee settlement in central Lebanon and the country's second-largest city, Tripoli, in the north.

The secretary general will be joined by World Bank and the Islamic Development Bank Group representatives on a five-day regional tour that will also take him to Jordan and Tunisia.