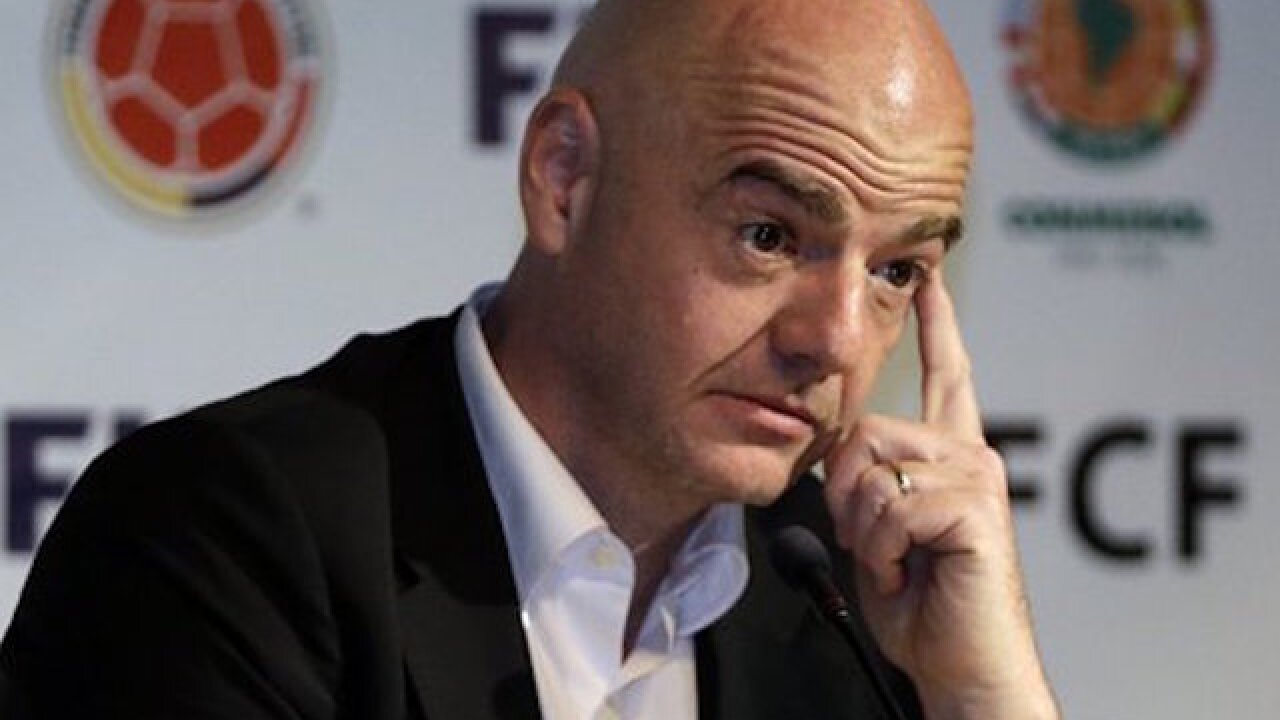 GENEVA (AP) — UEFA was raided by Swiss police on Wednesday and handed over evidence of a Champions League television rights contract with an offshore marketing agency implicated in the FIFA bribery scandal.

The Swiss attorney general's office said it requested raids on the European soccer body and "another enterprise" for suspected criminal mismanagement and misappropriation linked to dealings with Cross Trading, an offshore registered agency. Cross Trading is owned by two men indicted last year by American federal prosecutors who are working with Swiss counterparts to investigate suspected corruption in international soccer.

UEFA and its Champions League marketing agency — TEAM Marketing based in Lucerne, Switzerland — made a $111,000 deal with Cross Trading in 2006 for three seasons of broadcasting in Ecuador. The 2006 contract, co-signed by current FIFA President Gianni Infantino when he was UEFA legal director, was leaked from the database of Panama-based law firm Mossack Fonseca.

Swiss prosecutors said "for the time being, no specific individual is being targeted by these proceedings" which focused on the "acquisition of television rights."

"The suspicion (in the UEFA case) is based on the result of findings that have emerged from other proceedings, as well as the corresponding financial analyses carried out by the (office of the attorney general)," Swiss prosecutors said.

UEFA was raided now because its 10-year-old deal with now-indicted marketing executives, who are Mossack Fonseca clients, was revealed only on Tuesday.

"The suspicion motivating these proceedings is linked to these contractual relations," the Swiss federal office said.

UEFA acknowledged that Swiss federal police "acting under a warrant" came to see its contracts with Cross Trading.

"Naturally, UEFA is providing the Federal Police with all relevant documents in our possession and will cooperate fully," the soccer body, based on the banks of Lake Geneva in Nyon, said in a statement.

Cross Trading was named in a U.S. Department of Justice indictment last May as part of a bribery and money laundering conspiracy linked to broadcasting and competition hosting rights in international soccer. The agency is a subsidiary of the Full Play group owned by Argentine marketing executives Hugo and Mariano Jinkis, who were indicted last May. The father and son are fighting extradition from Argentina to the United States.

UEFA previously said it had no commercial connections to people or companies indicted in the American case. However, after a vast leak of Mossack Fonseca archives was published by international media this week, UEFA has acknowledged its previous response was "inaccurate and incomplete."

"UEFA apologizes for this oversight," it said Wednesday, claiming it previously had too little time to study thousands of commercial contracts.

UEFA said the Cross Trading sale was at appropriate market value, and it had no knowledge of a reported subsequent deal in which Cross Trading sold on rights to the Teleamazonas channel for a $200,000 profit.

"The offer made ... was very much the 'going rate' for this category of rights in comparable markets in Latin and Central America," UEFA said.

There has been no suggestion that bribes or kickbacks were paid at any stage of the deals.

Infantino made a statement through FIFA late Tuesday, saying "there is no indication whatsoever for any wrongdoings from neither UEFA nor myself in this matter."

"At that time nobody was aware that Cross Trading would, approximately a decade later, be the subject of criminal investigations," TEAM said.

Another evidence raid was made last month at the French soccer federation in Paris at the request of Swiss prosecutors. That related to Platini hiring offices and staff in the city to support his 1999-2002 work for Blatter.

After 17 scandal-hit years of Blatter's presidency, Infantino was elected six weeks ago promising a cleaner and more transparent future for the world soccer body.