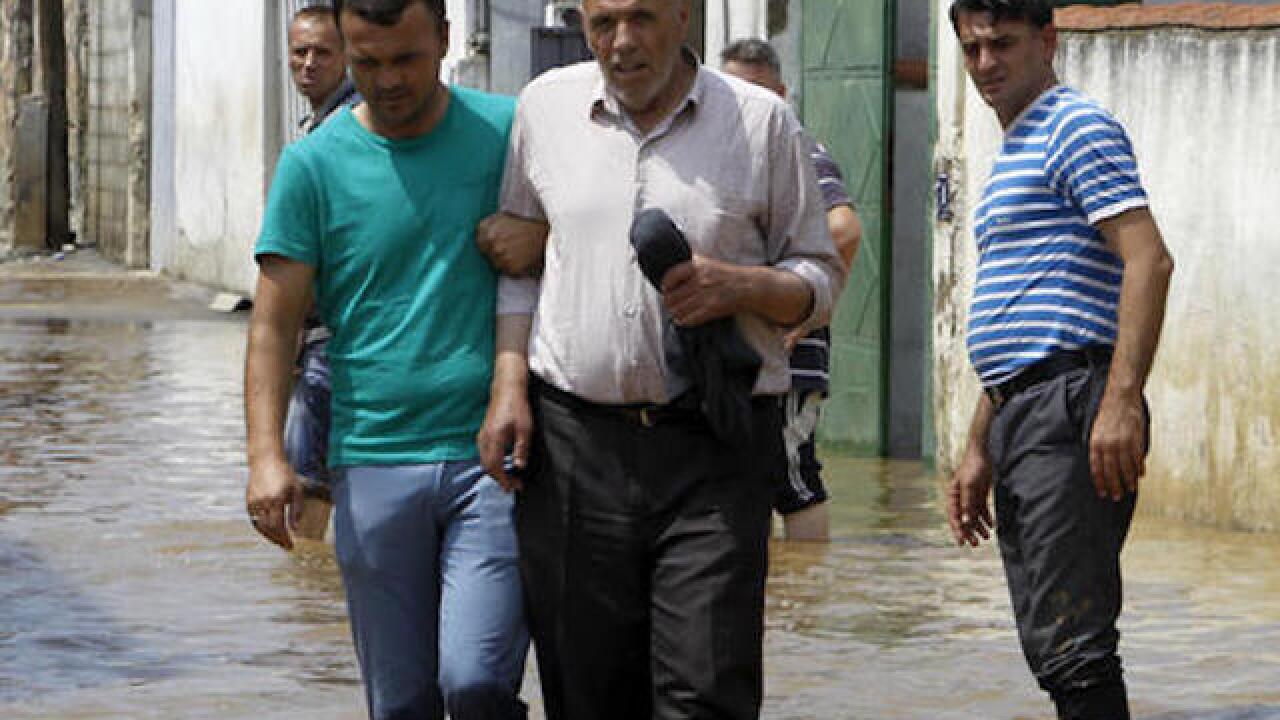 Boris Grdanoski
<p>A man helps another man walking through a flooded street after an overnight storm, at the village of Singelic, just east of Skopje, Macedonia, Sunday, Aug. 7, 2016. The Macedonian capital of Skopje has been hit Saturday night by torrential rain and floods that left at least 17 people dead, six missing and sent 60 others to the hospital. (AP Photo/Boris Grdanoski)</p>

The heavy rain, strong winds and thunderstorms struck Skopje and its northern suburbs late Saturday. Special police, army units and firefighters were sent to the worst-hit areas as well as the nearby villages of Stajkovci, Aracinovo and Smiljkovci.

Hundreds of homes and vehicles were destroyed by the floods, roads were impassable and several areas were without electricity. Authorities said more than 1,000 people had been evacuated so far.

Skopje mayor Koce Trajanovski described the damage as "the worst Skopje has ever seen." He said that the deadly deluge created hazardous rainfall accumulations within only 20 minutes.

"It was like a water bomb has fallen!" he said.

Many witnesses have described that victims drowned after being trapped in their houses when torrents suddenly swept through the area.

Skopje's city council held an emergency session and decided to provide financial help to victims' families, giving 180,000 denars (3,000 euros) to each. Authorities said they will open shelters for people from affected areas.

After a meeting of the National Crisis Management Center, Health Minister Nikola Todorov said many of the injured had fractures and contusions. He said the government plans to declare a state of emergency for two weeks in the most affected areas.

Authorities urged people to stay at home and to only drink bottled water.

Further north in Croatia, stormy winds have disrupted road and sea traffic at the height of the tourist season.

The state news agency HINA says parts of the main highway connecting the capital of Zagreb with the Adriatic coast remained closed on Sunday. Only cars were allowed down the sections of a highway and a regional road further north near the port of Rijeka.

Disruptions created by the bad weather have created traffic backups, with many tourists trying to reach Croatia's coastal resorts along the Adriatic Sea.