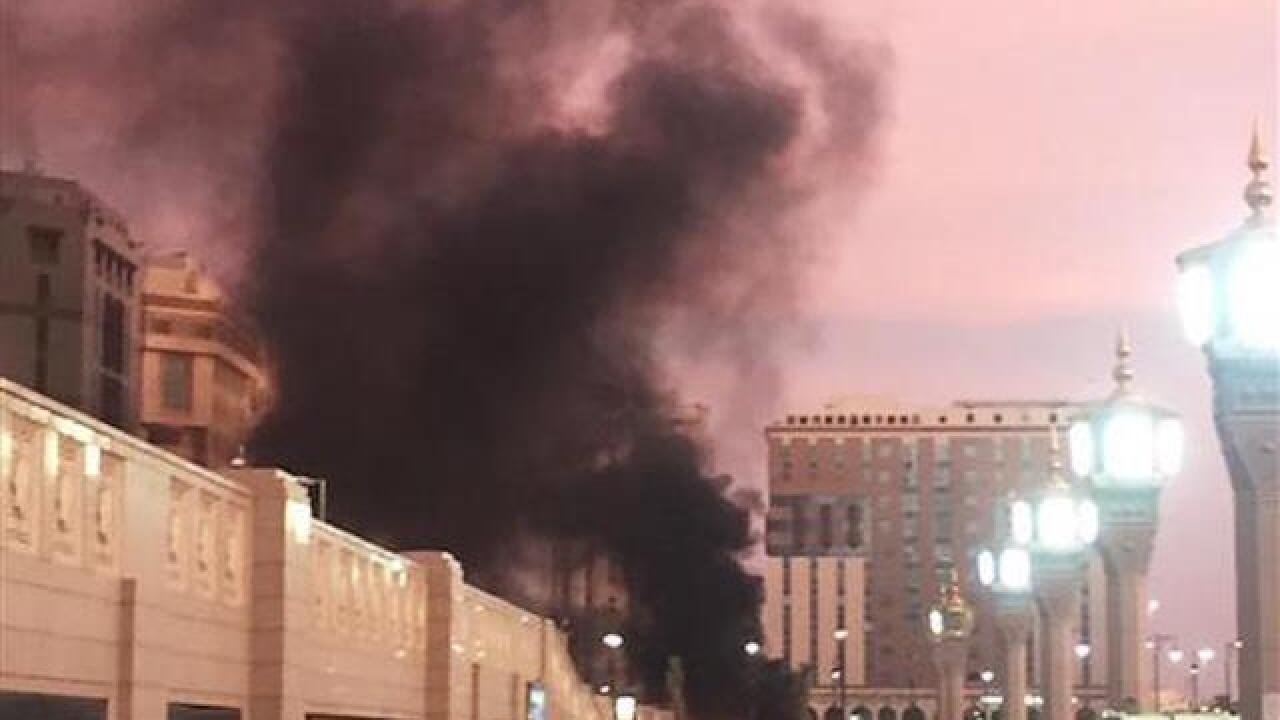 DUBAI, United Arab Emirates (AP) — Saudi Arabia on Tuesday identified the suicide bomber who struck outside the U.S. Consulate in Jiddah as a Pakistani resident of the kingdom who arrived 12 years ago to work as a driver.

The suicide bombing near the diplomatic post was the first of three targeting the kingdom on Monday, including one outside of the sprawling mosque grounds where the Prophet Muhammad is buried in the western city of Medina that killed four Saudi security troops and wounded five. Millions of Muslims from around the world visit the mosque every year as part of their pilgrimage to Mecca.

The governor of Mecca, Prince Faisal bin Salman, who is a son of King Salman, was shown on state television visiting security officers wounded in the Medina blast and the site of that explosion within hours of the blast.

No group has yet claimed responsibility for the Jiddah and Medina attacks, nor another at a Shiite mosque in the east of the country. The nature of the attacks and their apparently coordinated timing suggested the Islamic State group could be to blame.

An Interior Ministry statement issued on Tuesday identified the man behind the Jiddah attack as 34-year-old Abdullah Qalzar Khan. It said he lived in the port city with "his wife and her parents." The statement didn't elaborate.

In that attack, the bomber detonated his explosives after two security guards approached him, killing himself and lightly wounding the two guards, the Interior Ministry said. No consular staff were hurt.

Pakistani Foreign Ministry spokesman Nafees Zakaria said authorities in Islamabad were working to get more details about the man. He condemned the attacks and expressed solidarity with Saudi Arabia, saying the kingdom valued the contributions of Pakistani guest workers.

"Terrorism is a global phenomenon and is not country- or people-specific," Zakaria said.

Pakistani President Mamnoon Hussain, who had been visiting the kingdom for a religious pilgrimage, left Jiddah on Tuesday, the official Saudi Press Agency reported.

The Saudi ministry said the attacker in the Medina assault set off the bomb in a parking lot after security officers became suspicious about him. Several cars caught fire and thick plumes of black smoke were seen rising from the site of the explosion as thousands of worshippers crowded the streets around the mosque.

Worshippers expressed shock that such a prominent holy site could be targeted.

"That's not an act that represents Islam," said Altayeb Osama, a 25-year-old Sudanese visitor to Medina and resident of Abu Dhabi who heard two large booms about a minute apart as he was heading toward the mosque for sunset prayers Monday. "People never imagined that this could happen here."

The Prophet Muhammad's mosque was packed on Monday evening with worshippers during the final days of the Muslim holy month of Ramadan, which ends in the kingdom on Tuesday. Local media say the attacker was intending to strike the mosque when it was crowded with thousands of worshippers gathered for the sunset prayer.

Qari Ziyaad Patel, 36, from Johannesburg, South Africa, was at the mosque when he heard a blast just as people were breaking their fast with dates. Many at first thought it was the sound of traditional, celebratory cannon fire, he said.

"I actually felt the ground shake," he said. "The vibrations were very strong. ... It sounded like a building imploded."

The ruling Al Saud family derives enormous prestige and legitimacy from being the caretakers of the hajj pilgrimage and Islam's holiest sites in Mecca and Medina. Monday's attacks may have been an attempt to undermine the Saudi monarchy's claim of guardianship.

Saudi Arabia is part of the U.S.-led coalition fighting the Islamic State group in Iraq and Syria, and the militant group views its ruling monarchy as an enemy. The kingdom has been the target of multiple attacks by the group that have killed dozens of people. In June, the Interior Ministry reported 26 terror attacks in the last two years.

In 1979, extremists took over Mecca's Grand Mosque, home to the cube-shaped Kaaba, for two weeks as they demanded the royal family abdicate the throne.

Last year, the Saudi government was accused of gross negligence by regional foes, primarily Shiite powerhouse Iran, after a crush of pilgrims during the annual hajj killed at least 2,426 people and a crane collapse over the Grand Mosque killed 111 worshippers.

The attack near a Shiite mosque in the eastern region of Qatif did not appear to cause any injuries, said resident Mohammed al-Nimr. His brother, prominent Saudi Shiite cleric Nimr al-Nimr, was executed in January after a court found him guilty of sedition and inciting violence for his role in anti-government protests — charges his supporters reject. Qatif is home to many Shiites, a minority in the Sunni-dominated kingdom.

IS and other Sunni extremists consider Shiites to be apostates deserving of death, and have previously attacked Shiite places of worship, including a suicide bombing on a Shiite mosque in Qatif in May 2015 that killed 21 people.