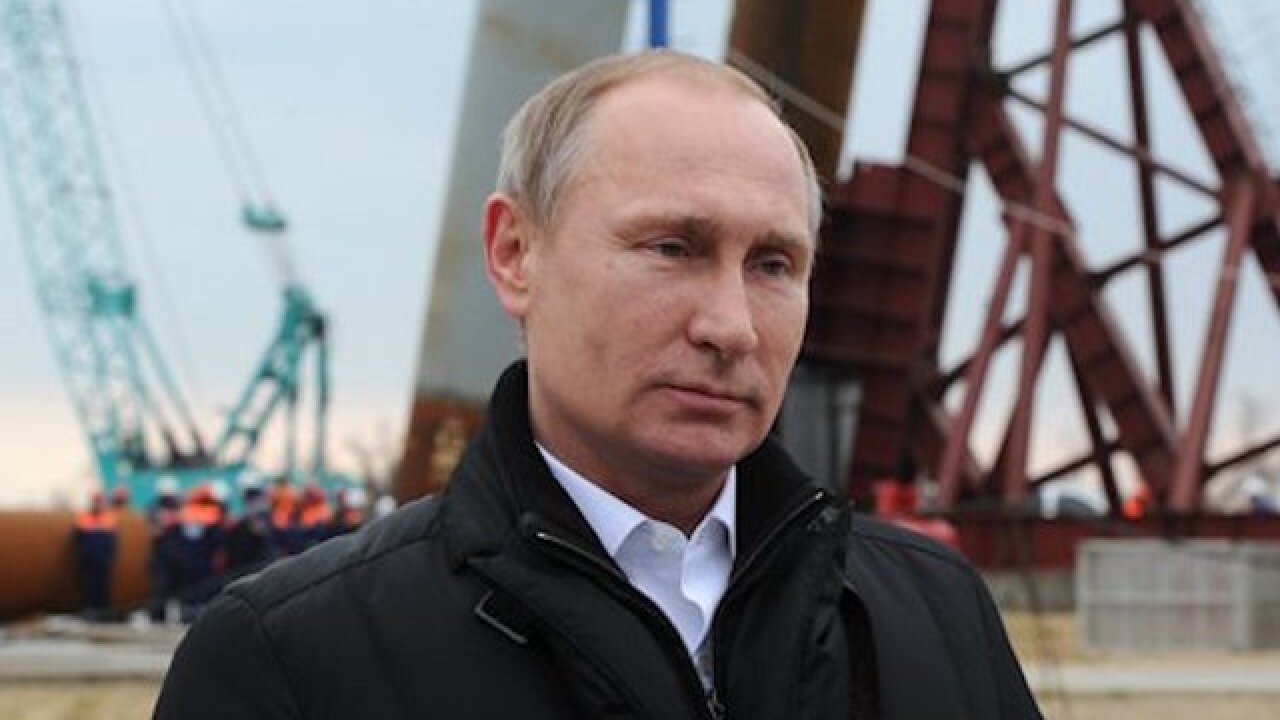 Copyright Associated Press
Mikhail Klimentyev
<p>Russian President Vladimir Putin, via a video link, addresses people marking the second anniversary of Russia's annexation of Crimea in Moscow's Red Square, as he visits the construction site of the Kerch Strait bridge on the Tuzla Island, Crimea, Friday, March 18, 2016. Russian President Vladimir Putin travelled to Crimea on Friday to mark the second anniversary of the peninsula's annexation and inspect construction of a bridge meant to link it to mainland Russia. (Mikhail Klimentyev/Sputnik, Kremlin Pool Photo via AP)</p>

MOSCOW (AP) — In the list of presidents, prime ministers, sheikhs, billionaires and other magnates cited in a sweeping worldwide investigation into hidden assets in offshore accounts, there was an odd man out: A Russian cellist.

Up until now, 64-year-old Sergei Roldugin was known only in the Russian music community — as a People's Artist of Russia and the artistic director of the House of Music in St. Petersburg. What makes him stand out from other Russian musicians, however, is his close ties to President Vladimir Putin.

Roldugin features in Putin's early autobiography as a close friend and the godfather of Putin's eldest daughter, Maria. He pursued a musical career, and despite the fact that he never became a tycoon like many of Putin's other friends, he did somehow acquire a stake in the Rossiya bank, one of the first Russian firms slapped with U.S. sanctions following Russia's 2014 annexation of Crimea.

The U.S. Treasury in 2014 described the bank as being "designated for providing material support to government officials" and co-owned by members of Putin's inner circle. But unlike other Putin friends who have built flourishing businesses in Russia, Roldugin, whose stake in Rossiya was reported at 3.3 percent, was not slapped with sanctions.

A myriad of documents that the Washington-based International Consortium of Investigative Journalists gained access to showed Roldugin — or someone posing as him — skillfully operating affiliated companies that controlled a significant share of a business empire that earned tens of millions of rubles per day from murky deals. The companies received millions from Putin's friends and Russian billionaires as well as preferential loans from a Russia-controlled Cyprus-based bank.

The journalists who analyzed the leaked documents from the Panamanian law firm Mossack Fonseca, one of the world's biggest creators of shell companies, say the combined turnover of a company that Roldugin is reported to have owned through an intermediary between 2009 and 2012 was around $2 billion.

When the Novaya Gazeta newspaper, which led the ICIJ investigation in Russia, approached Roldugin after a concert, the cellist had a friendly chat with the reporter but refused to talk about the offshore companies, saying the subject was "delicate."

Roldugin was unavailable for comment on Monday. A receptionist at the St. Petersburg House of Music said he was not in.

The release of what has become known as the Panama Papers has sent officials in countries around the world scrambling. Some have pledged to investigate claims of possible tax evasion, others like the prime minister of Iceland and the president of Ukraine face political storms over their alleged involvement in offshore companies.

In Russia, however, the trove of documents showing a money trail leading close to the president has gone largely unnoticed.

At first, Russian state media and pro-Kremlin media ignored the Panama Papers reports, then some reported only parts of it related to the Ukrainian president's woes and those of an Argentinean soccer player. A few hours later, Putin's spokesman Dmitry Peskov blamed Western media for focusing on Putin even though he was not directly linked to any offshore activity.

Peskov suggested the ICIJ had ties to the U.S. government. The ICIJ is part of the nonprofit, non-partisan Center for Public Integrity.

"It's obvious that there are many journalists there whose main profession is unlikely to be journalism," he said, alleging that "former employees of the State Department, the CIA, other security services" may have been involved in the publication of the leaks.

Peskov said Roldugin was a friend of Putin's but added the president "has very many friends."

In past years, as Putin's friends were building fortunes by getting lucrative state contracts with no or little competition, independent media in Russia have published countless investigations suggesting a conflict of interest at the least — or possibly major corruption. These reports, however, did not lead to any official investigations, Russian government reshuffling or public discontent.

Arguably the only exception was last year's protest by truck drivers who rallied against a hefty new road tax imposed by a company co-owned by a son of one of Putin's friends.

Russian experts said even if the offshore scandal was getting coverage on Russian television, Putin will still come out of it unscathed.

"There aren't any accounts directly connecting Putin to the companies, but even if there were, it is unlikely that this would shock his supporters in Russia," Alexander Baunov of the Carnegie Center in Moscow told The Associated Press.

Putin's detractors, he said, are looking in the wrong places for problems that could potentially destabilize his government.

What could be disastrous for Putin? "Anything that brings Russia back to the 1990s," said Baunov, referring to the withholding of salaries and a slump in living standards.

In a country where all officials are believed to be corrupt by default, a revelation of corruption in Putin's inner circle or even his own misdeeds are not viewed as much of a sin.

"In a healthy society, all those friends of the national leader would already be behind bars while the leader himself would be a pariah," Dmitry Gudkov, the only Russian lawmaker who voted against the Crimean annexation said in a blog Monday. "In our (society) the reaction is: 'So what? He does not drink newborn babies' blood, thanks for this.' We know things could be worse."

While Russian opposition activists were fuming on social media about the Panama Papers revelations, the reports left many more Russians unmoved.

"Seriously, if someone had posted a photo of Putin watching 'Peppa Pig' it would have caused more of a stir," blogger Ilya Varlamov tweeted, referring to a popular cartoon series.

Unlike the reclusive banker Yuri Kovalchuk or Putin's childhood friend Arkady Rotenberg, the soft-spoken Roldugin has never hidden from the press, giving interviews about his love for music and Russian musical talent.

"I don't like talking about Putin. It's private, I hope you understand," Roldugin said in a 2014 interview.

But when asked where he thinks Putin's government is failing, he said: "I think there is not enough effort to fight corruption in Russia. I would like to see more decisive action."