First time games are in Australia 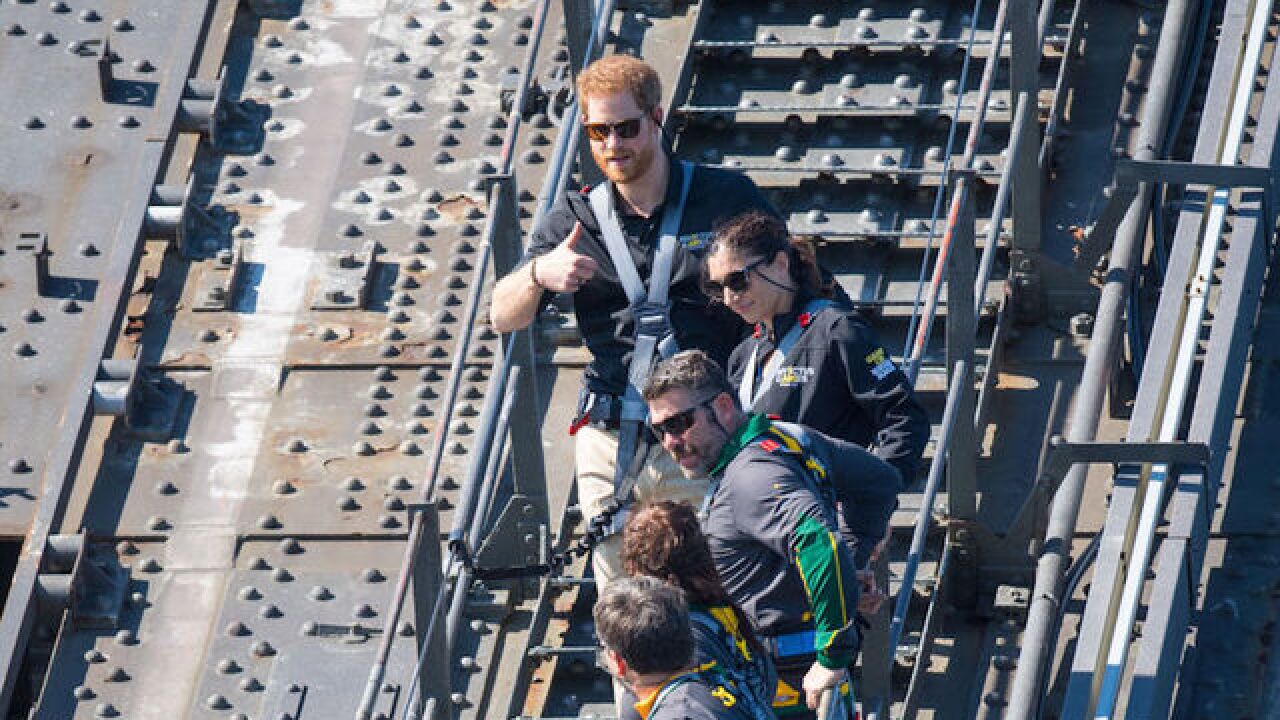 Image copyright 2018 Getty Images. All rights reserved. This material may not be published, broadcast, rewritten, or redistributed.
Dominic Lipinski
<p>Prince Harry, Duke of Sussex climbs the Sydney Harbour Bridge with Prime Minister of Australia Scott Morrison and Invictus Games competitors on October 19, 2018 in Sydney, Australia. The Duke and Duchess of Sussex are on their official 16-day Autumn tour visiting cities in Australia, Fiji, Tonga and New Zealand. </p>

Prince Harry opened the fourth annual Invictus Games in style on Friday afternoon, climbing Australia's iconic Sydney Harbour Bridge along with a number of veterans and competitors from the upcoming event.

Dressed in a black shirt with the logo of the sporting event he helped to kick-start in 2014, the British royal ascended the 13-meter (439 foot) high landmark in beautifully sunny weather, accompanied by Australia's Prime Minister Scott Morrison.

It will be the fourth time the annual games have been held. The Invictus Games are a multi-sport event specifically held for wounded or disabled veterans to participate in.

The Duke of Sussex has been touring Australia with his wife, Meghan, Duchess of Sussex, ahead of the start of the games on Saturday.

The royal couple, who are expecting their first child, has so far visited drought-stricken areas of New South Wales, ridden trams in Melbourne and visited Sydney's world-famous Bondi Beach.

On Friday, Harry and Meghan started the day by meeting members of the OneWave surfer support group, which raises awareness of mental health issues.

Both Harry and Meghan beamed as they joined attendees for the daily Anti-Bad Vibes Circle at Bondi Beach, which the group usually follows up with yoga and surfing.

One member of the group told CNN affiliate Sky News the royals were "no different" to the rest of the group. "They (also) have their own amazing, individual, beautiful story. That's what makes us all great, really," he said.

A former British colony, Queen Elizabeth II is still Australia's head of state despite repeated pushes to end the country's ties to the UK monarchy.

An Essential poll in May 2018 found 48% of Australians supported breaking away and becoming a republic, compared to just 30% who said they wanted to keep the monarchy.

Traces of republican sentiment have so far been obscured, however, as crowds of fans and well-wishers flock to meet the young royals, offering gifts of flowers and words of support for the pregnant duchess.

The royals will continue their two-week tour during the games, visiting Fiji and New Zealand, before returning to Australia for the closing ceremony on October 27.