President of the Philippines promises God to stop cursing 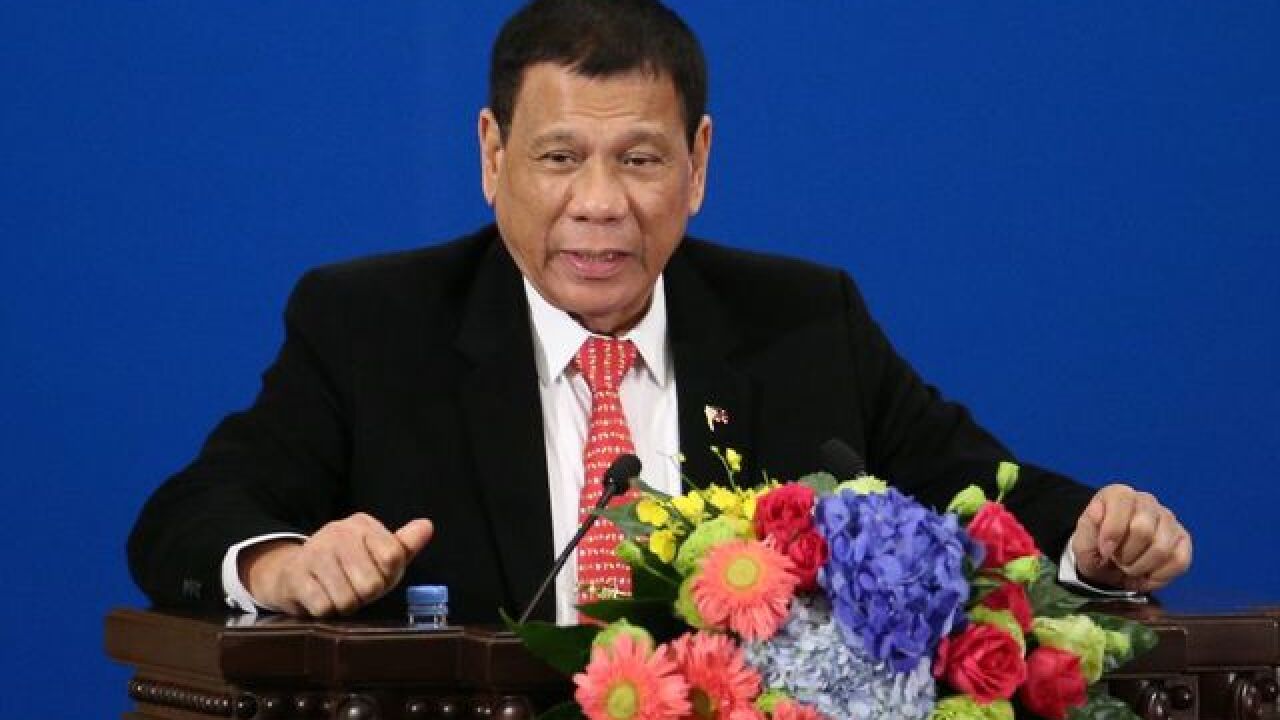 MANILA, Philippines (AP) — The foul-mouthed Philippine president, who once called the pope a "son of a bitch" and told Barack Obama to "go to hell," says he has promised to God he won't spew expletives again.

President Rodrigo Duterte's profanities have become his trademark, especially when threatening to kill drug dealers as part of his war on illegal drugs that has left thousands dead since he took office at the end of June.

Duterte made the stunning pledge on arrival in his southern hometown of Davao city late Thursday from a trip to Japan.

While flying home, he said he was looking at the sky while everyone was sound asleep, some snoring, and he heard a voice that said "'if you don't stop epithets, I will bring this plane down now."

"So, I promise God to ... not express slang, cuss words and everything. So you guys hear me right always because (a) promise to God is a promise to the Filipino people."

Duterte's vow was met with applause, but he cautioned: "Don't clap too much or else this may get derailed."

He shocked the dominant Roman Catholics last year when he fired off an expletive while expressing his disgust over a monstrous traffic jam that trapped him while Pope Francis was visiting Manila. "I wanted to call. 'Pope, you son of a bitch, go home.' Don't visit here anymore," he told a mob of supporters, some of whom laughed.

He later apologized after Filipino bishops expressed shock and outrage.

It's not certain if the 71-year-old president, who has been compared to U.S. Republican presidential candidate Donald Trump because of his brash language, can keep his promise. Duterte made a similar pledge in June when it became evident that he had won the May 9 presidential elections overwhelmingly on a pledge to end crimes, especially illegal drugs and corruption.

He said then that he was enjoying his last moments as a "rude person" because "when I become president, when I take my oath of office ... that will be a different story. There will be a metamorphosis."

It didn't take long for Duterte to break the promise.

There were no expletives in his late Thursday speech, but Duterte still sounded mean toward critics.

When asked for his message for a Filipino beauty queen who won the recent Miss International pageant, Duterte said he was proud. "Many Filipinas are beautiful, but all of you there in the human rights commission are ugly."

Asked if the days of his cursing the U.S. and the EU are over, Duterte didn't answer clearly.

"I do not want anybody reading my mind because I couldn't make a smart move anymore. But it's all calibrated, it's all about timing," Duterte said.

In Washington, U.S. State Department spokesman Mark Toner said that Duterte was "certainly entitled to his views about his own relationship with the supreme being," but would not comment on whether it would make conversation easier with the Philippine leader.