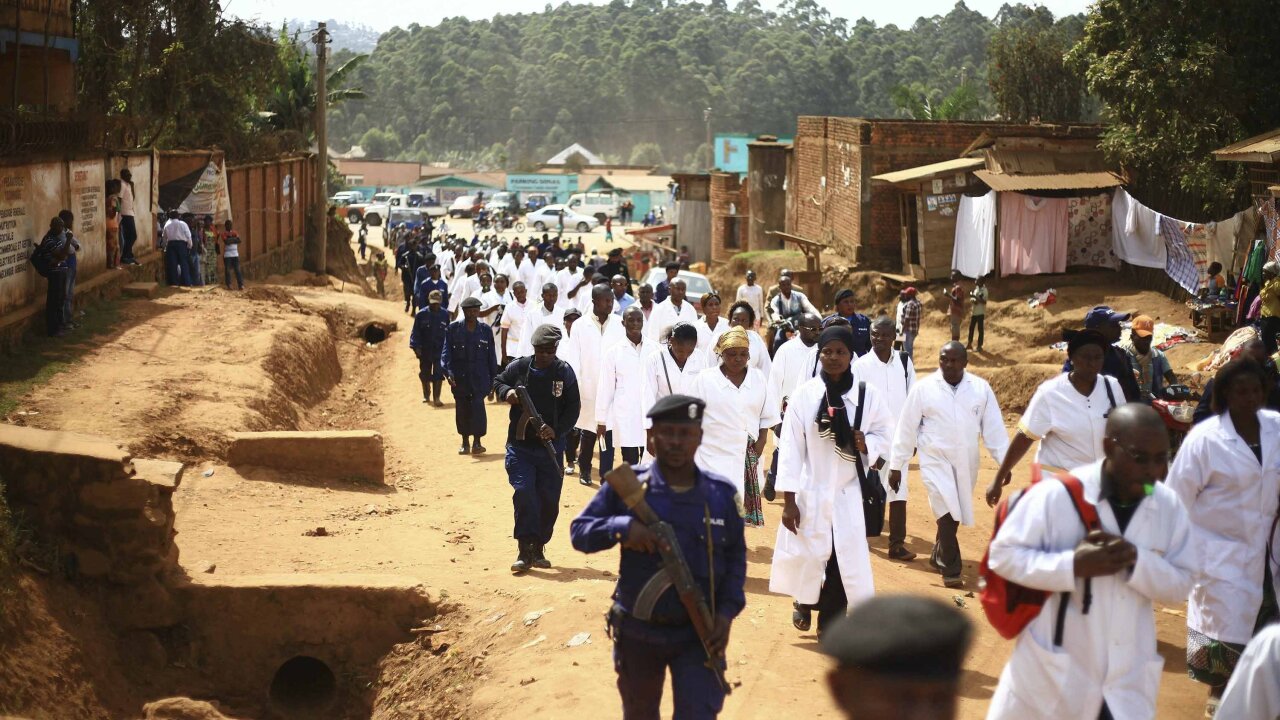 As of Wednesday, 1,510 cases of Ebola have been reported in North Kivu and Ituri provinces of the Democratic Republic of Congo, the country's Ministry of Health reported Thursday .

Friday afternoon Congo's Ministry of Health said there had been been 1,008 Ebola deaths to date.

The tragic milestone of 1,000 Ebola deaths during this outbreak was probably exceeded Thursday, with reports filed Friday, said Dr. Michael Ryan, an executive director at the World Health Organization.

On average, Ebola -- which causes fever, severe headache and in some cases hemorrhaging -- kills about half of those infected. However, more than 400 patients have been treated and discharged from Ebola treatment centers during the outbreak, which began in August.

With violent attacks on communities and medical centers, a "considerable" rise in Ebola cases has occurred over the past week in Congo, WHO reported .

"Since January, we've experienced 119 separate attacks, 42 of which have been directly on health facilities, with 85 health personnel either injured or killed in those settings," Ryan said. "We are anticipating a scenario of continued intense transmission."

The outbreak is the second-deadliest and second-largest in history, topped only by one in West Africa in 2014, when the disease killed more than 11,000 people, according to WHO.

Insecurity is an impediment to response

WHO Director-General Dr. Tedros Adhanom Ghebreyesus and Regional Director for Africa Dr. Matshidiso Moeti visited North Kivu and Ituri this week and "found the situation on the ground to be worse than it has been previously," said Ryan, who recalled the "sad and tragic death" of a colleague.

"Insecurity has become a major impediment to ensuring that we can access, engage with and serve the communities we wish to serve in Ebola control," he said.

US Ambassador Mike Hammer , who has traveled to Ebola hot spots over the past couple of months, told CNN that "there are over 100 armed groups" operating in the conflict zone of eastern Congo, which encompasses the outbreak-affected region, and that one group, known as the Alliance Defense Force, has become "increasingly associated with ISIS."

Long-term conflict has smoldered in the northeastern region of the country for decades, with armed groups causing intermittent violence, according to WHO. The UN public health agency estimates that more than a million refugees and internally displaced people are traveling through and out of North Kivu and Ituri provinces, and this movement is a potential risk factor for the spread of Ebola. Ryan says some of the groups may be political, others criminal and some a mix of both.

Hammer said conflict "has complicated the efforts on the ground, including not making it possible" for the US Centers for Disease Control and Prevention to deploy personnel to the epicenter. Last fall, the US State Department "determined that it was too dangerous to deploy our [CDC] health responders" to hot spot areas, he said. "Unfortunately, I hate to say it, but that decision has proven correct."

However, CDC personnel are working in safer areas of Congo, including both Kinshasa and Goma, and some team members "occasionally" make brief strategic visits to the epicenter to aid the response, he said. He emphasized the fact that the government, working with the international community and the CDC, "has succeeded so far in containing the outbreak to one specific region."

Last year's Ebola outbreak in western Congo "was successfully defeated within a matter of months, quelled by primary responders from the Ministry of Health" aided by the international community, Hammer emphasized. That response was successful in part because "it was in a secure area, an area not affected by conflict."

Hammer, who has been working with his counterparts and others in the region to ensure cooperation, monitoring and surveillance at the borders, said the newly elected president, Felix Tshisekedi, "is looking to continue to partner with the international community and the US to hopefully eradicate the outbreak."

In April, Tshisekedi traveled to the epicenter as well as to Washington, where he met with US Health and Human Services Secretary Alex Azar, CDC Director Dr. Robert Redfield and senior State Department officials, among others. "It's quite clear it's a top priority for him," Hammer said.

Ryan also commended Tshisekedi for establishing a "multisectoral committee" -- one that joins Congo's Ministry of Defense, the Ministry of the Interior and other government groups with the Ministry of Health -- to work on ending the outbreak.

Yet problems are rife and include financial difficulties. WHO has a funding gap for its own work of $54 million, Ryan said. "That's despite having spent over $35 million of our contingency fund since the beginning of the year," he said.

The response is costly, involving tracking over 12,000 contacts per day and vaccinating over 1,000 people per day, some at WHO's new pop-up vaccination centers.

Despite money troubles and insecurity, WHO decided last month that the Ebola outbreak does not constitute a public health emergency of international concern, which is defined as "an extraordinary event" that constitutes a "public health risk to other States through the international spread of disease" and "to potentially require a coordinated international response." Critics believe that a declaration of emergency would have replenished funds and brought relief to first responders.

WHO is also exploring the possibility of using fractional doses of an existing Merck vaccine to extend the supply and introduction of a new experimental vaccine from Johnson & Johnson, Ryan said.

"We currently have enough vaccine supplies for our current strategy," Ryan said. The justification for fractional doses and bringing in a second vaccine is to devise an improved tactical approach.

"We would not plan to use that second vaccine in the epicenter," he said. The population might be better shielded if WHO uses the Merck vaccine for contacts of those who are sick with Ebola and then using the J&J vaccine beyond this ring of contacts in the "village next door that doesn't have disease yet."

The Merck vaccine has been one of the "saviors" in this response, Ryan said. "Every time we fall behind in the process of vaccination, the outbreak intensifies."