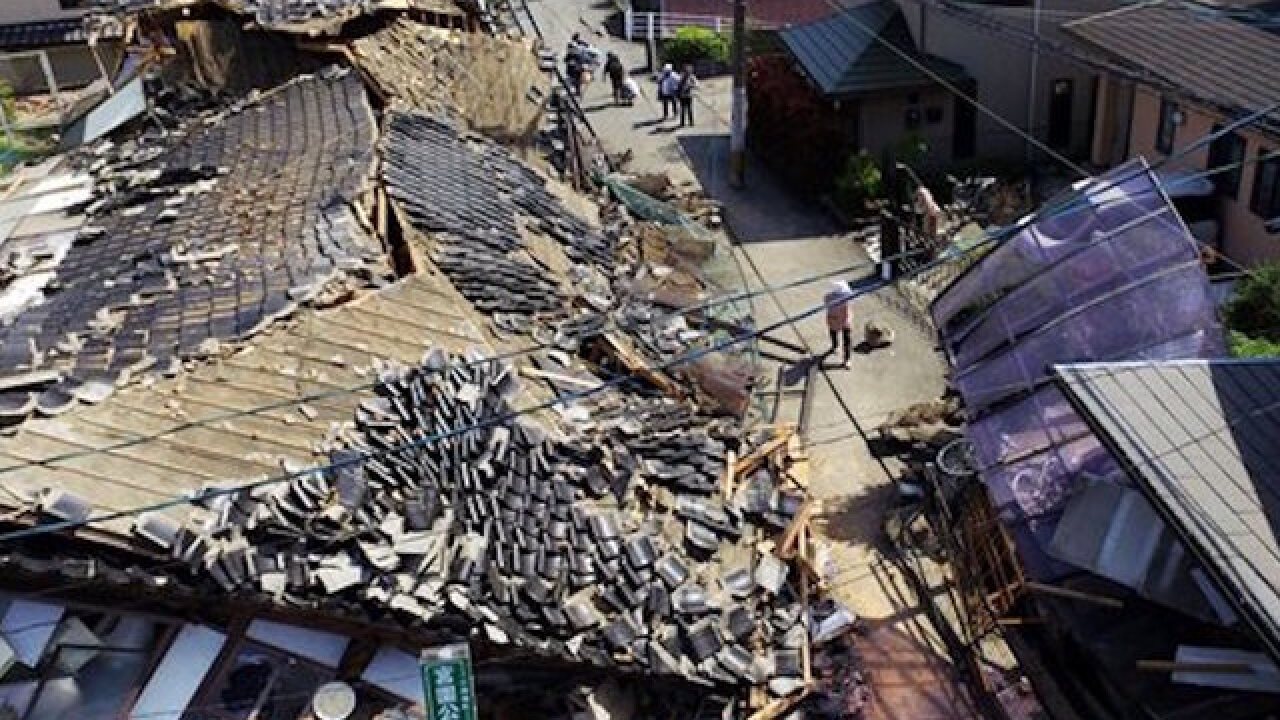 Officials said on Saturday that at least six people were killed by the most recent quake.

Japanese broadcaster NHK said a number of calls were coming in from residents reporting people being trapped inside houses and buildings, and rescue workers were scrambling to help.

The quake shook the Kumamoto region at 1:25 a.m. Saturday, and several aftershocks soon followed. Japan's Meteorological Agency issued an advisory for a tsunami up to 1 meter (3 feet) high along the coast west of the epicenter in Kumamoto; the advisory was lifted less than an hour later.

Sirens of patrol vehicles were heard on the background as NHK reported from the hardest-hit town of Mashiki. The asphalt ground outside the town hall had a new crack, apparently made by the latest earthquake.

The Nuclear Regulation Authority said no abnormalities were found at the Sendai nuclear plant, where the only two of Japan's 43 operable reactors are online. NHK video showed that stones tumbled from the walls of historic Kumamoto Castle, and a wooden structure in the complex was smashing, adding to damage Thursday at the site.

At the Ark Hotel, east of the castle, hotel guests woke up to strong shaking and a warning siren. Hotel staff asked guests, including tourists and journalists covering the quake, to evacuate their rooms and gather in the lobby for safety.

Thursday's weaker, magnitude 6.5 earthquake brought down buildings and injured about 800 people, in addition to the nine deaths. The epicenter of Saturday's earthquake was about 12 kilometers (8 miles) northwest of Thursday's, and at a depth of about 10 kilometers (6 miles), Saturday's quake was shallower.

It hit residents who were still in shock from the previous night's horrors and had suffered through more than 100 aftershocks in the interim.

On Friday, Yuichiro Yoshikado described the horror of the earthquake striking as he was taking a bath in his Mashiki apartment.

"I grabbed onto the sides of the bathtub, but the water in the tub, it was about 70 percent filled with water, was going like this," he said, waving his arms, "and all the water splashed out."

"It's as if all control was lost. I thought I was going to die and I couldn't bear it any longer."

A bright spot broadcast repeatedly on television Friday was the overnight rescue of an apparently uninjured baby, wrapped in a blanket and carried out of the rubble of a collapsed home.

Police said Friday that concern about aftershocks was keeping many people from starting the huge task of cleaning up. Since Saturday's quake was bigger, Thursday's was technically a foreshock.

Yoshikado, whose building was undamaged despite the intense shaking, checked the damage at his aunt and uncle's home nearby. Kitchenware was scattered on the floor, and a clock had stopped around 9:26 p.m., the time of the earthquake. Power and water have yet to be restored, and many in the neighborhood have yet to return because of the aftershocks.

About 44,000 people stayed in shelters after Thursday's quake.

The dead included five women and four men, the Fire and Disaster Management Agency said. One man was in his 20s, and the rest of the victims ranged from their 50s to one woman in her 90s. Eight of the nine victims were from Mashiki.

There were varying reports on the number of injured. The government's chief spokesman, Yoshihide Suga, said at least 860 people had been injured, 53 seriously. Kumamoto prefecture tallied 784 injured.

Suga said 1,600 soldiers had joined the relief and rescue efforts. TV reports showed troops delivering blankets and adult diapers to those in shelters.

With water service cut off in some areas, residents were hauling water from local offices to their homes to flush toilets.

Suga said there were no abnormalities at nearby nuclear facilities. The epicenter was 120 kilometers (74 miles) northeast of Kyushu Electric Power Co.'s Sendai nuclear plant, the only one operating in the country.

Most of Japan's nuclear reactors remain offline following the meltdowns at the Tokyo Electric Power Co.'s Fukushima plant in 2011 after a magnitude 9.0 earthquake triggered a huge tsunami.

According to the Japan Meteorological Agency, Mashiki sits near two faults on Kyushu. The area is also near Mount Aso, a huge, active volcano. JMA officials said the quake was unusually strong for Kyushu.