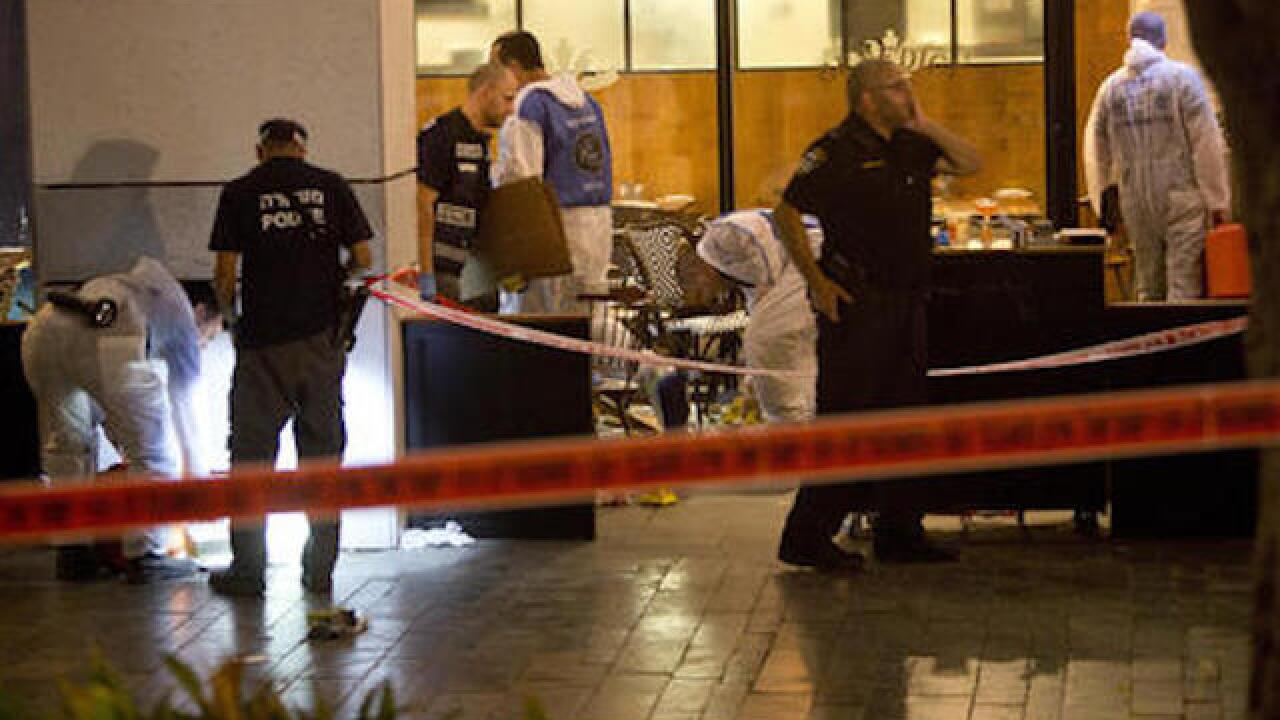 JERUSALEM (AP) — Israel on Thursday imposed a series of sweeping restrictions on Palestinian movement and deployed hundreds of additional troops to the West Bank in response to a Tel Aviv attack that killed four Israelis.

The shooting, carried out by two West Bank Palestinians, targeted a crowded tourist and restaurant district in the heart of Tel Aviv and was among the deadliest and most brazen attacks in a nine-month wave of violence. The area is located across the street from the Israeli military's headquarters.

As Prime Minister Benjamin Netanyahu prepared to meet with his Security Cabinet to discuss further responses, the Israeli military announced that it was deploying two additional battalions to the West Bank "in accordance with situation assessments." The deployment, involving hundreds of troops, includes soldiers from infantry and special forces units.

Among the participants in the Security Cabinet meeting was Israel's new defense minister, Avigdor Lieberman, the leader of an ultranationalist party known for his hard-line views toward the Palestinians. Before the meeting, Lieberman visited the site of the shooting and had a cup of coffee in a local cafe.

"I do not intend to speak and detail the steps we intend to take, but I am sure that I have no intention to stop at words," he said.

Earlier Thursday, defense officials suspended tens of thousands of special permits given to Palestinians to visit Israel during the current Muslim holy month of Ramadan.

Israel considers the Ramadan permits a goodwill gesture toward Palestinians.

In addition, the military said it had frozen Israeli work permits for 204 of the attackers' relatives, and was preventing Palestinians from leaving and entering the West Bank village of Yatta, the attackers' home village. COGAT said entering or leaving will only be permitted for humanitarian and medical cases.

The military was also making preparations to demolish the family home of one of the attackers. Israel often responds to attacks by demolishing the homes of the assailants or their relatives — a tactic that is criticized by the Palestinians and human rights groups as collective punishment.

The "Sarona" compound, the scene of Wednesday's shooting, quickly reopened.

In the attack, two Palestinians dressed in black suits opened fire at the Max Brenner restaurant in Sarona, killing four Israelis and wounding nine others. Sarona, home to dozens of shops, cafes and restaurants, is one of Tel Aviv's most population destinations and is often crowded with visitors and soldiers in uniform taking a break from their duties at the nearby headquarters.

Police identified the victims as Michael Feige, 58, a sociologist and anthropologist at Ben-Gurion University, and Ido Ben Arieh, 42, a veteran of an elite army unit who was an executive at the Coca-Cola Co.'s Israel branch, his wife, who was injured in the attack, told Israeli media. Two other victims were identified as Ilana Naveh, 39, and Mila Misheiv, 32.

Police said the two gunmen in their twenties were members of the same family from the Palestinian village of Yatta, near the West Bank city of Hebron, which has been a flashpoint for violence in recent months. One gunman was injured and was being treated in an Israeli hospital. The other was apprehended by security.

Israeli security officials said the weapons were crudely improvised, indicating that a militant organization was not involved. They said the attackers did not have special Ramadan permits allowing them to enter Israel, but that they had sneaked into Israel illegally to carry out the assault, according to initial assessments.

Ahmad Mussa Mahmara, the father of one of the attackers, said his son has two uncles serving life sentences in Israeli prison.

"We didn't expect this. My son is young and has been in Jordan for the past four years, and just came here for the past five months. He does not have any political affiliation," Mahmara said.

The military interrogated Mahmara Wednesday night at his home, where his son was staying. Soldiers took measurements of the home in preparation for demolishing it, the military said.

Hamas, the Islamic militant group that rules Gaza, welcomed the attack but did not claim responsibility. Hamas official Mushir al-Masri called the shootings a "heroic operation" and the group later issued an official statement promising the "Zionists" more "surprises" during Ramadan.

Islamic Jihad, another militant group, called the shooting a "natural response" to Israel's "brutal actions" against Palestinians. But it also did not claim responsibility for the attack.

Over the last eight months Palestinians have carried out dozens of attacks on civilians and security forces, mostly stabbings, shootings and car ramming assaults that have killed 32 Israelis and two Americans. About 200 Palestinians have been killed during that time, most identified as attackers by Israel. The assaults were once near-daily incidents but they have become less frequent in recent weeks.

Most of the attacks have been in east Jerusalem or the West Bank, territories Israel seized in the 1967 Mideast war and which the Palestinians want for their future state.

"Murder and terror are completely without justification and cannot be used as an instrument of political disagreement," said Steinmeier.