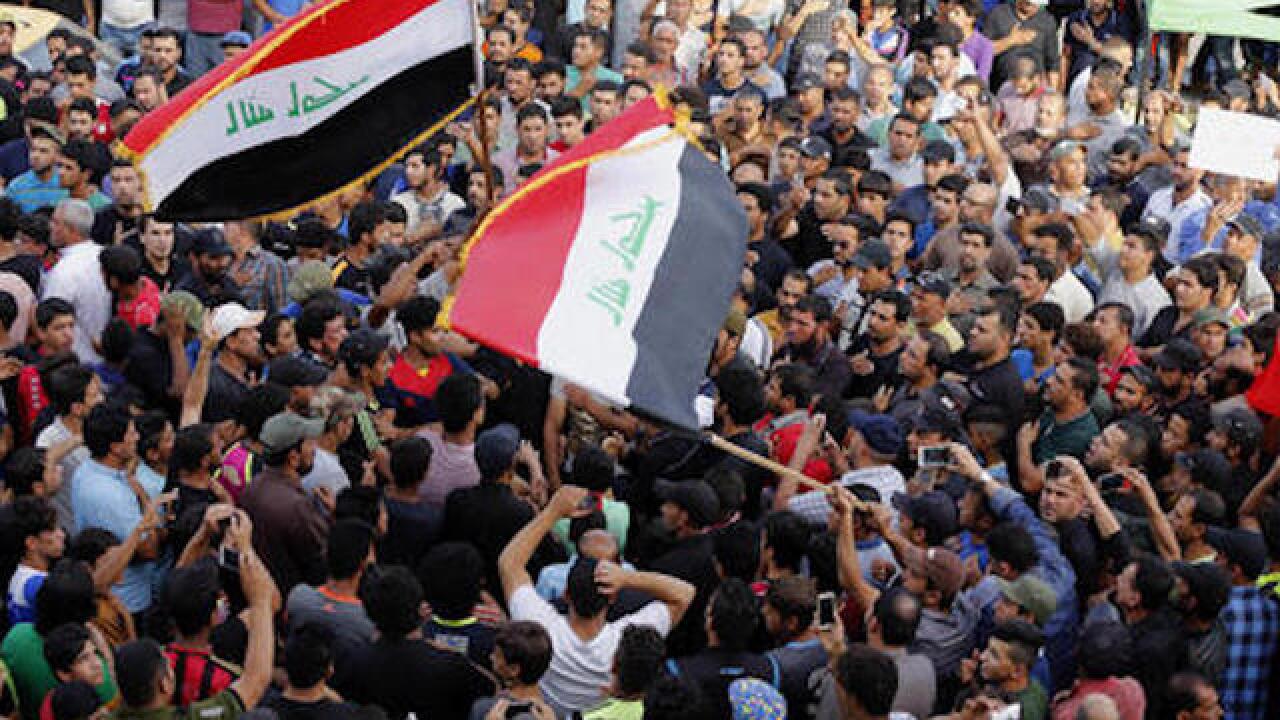 Copyright Associated Press
Karim Kadim
<p>Protesters hold national flags as they chant anti-government slogans during a demonstration against the security forces' failure to protect them from car bombs at the site of yesterday's car bomb attack in the Iraqi capital's eastern district of Sadr City, Iraq, Thursday, May 12, 2016. The protesters hold posters depicting, Iraq's Interior Minister Mohammed al-Ghabban and former Iraqi Prime Minister Nuri al-Maliki and Iraqi lawmaker, Hanan al-Fatlawi with Arabic sentences read, "leave, leave you failure" and " your message has been received"and "No No to terrorism," (AP Photo/Karim Kadim)</p>

BAGHDAD (AP) — A group of gunmen, including two suicide bombers, stormed a coffee shop in a town north of Baghdad early on Friday, killing at least 13 people and wounding 15 there, Iraqi officials said.

Within hours, the Islamic State group posted a statement online claiming responsibility for the attack, which took place shortly after midnight Thursday in Balad, 80 kilometers (50 miles) north of the Iraqi capital.

The attack came on the heels of a two-day wave of bombings in Baghdad that killed nearly 100 people — attacks that have also been claimed by the Islamic State group. The deadliest struck the sprawling Shiite neighborhood of Sadr City in northeast Baghdad on Wednesday, killing 63 people.

According to Iraqi officials, three gunmen armed with machine guns opened fire into the crowded Balad cafe and once police arrived at the scene, two of the attackers detonated their suicide vests. The officials spoke on condition of anonymity because they were not authorized to talk to the media.

Later Friday, Iraq's top Shiite cleric, Grand Ayatollah Ali al-Sistani, condemned the wave of attacks and said the government is ultimately responsible for such security breaches, accusing the country's politicians of "closing their ears to their advisers."

Al-Sistani's words were relayed by his aide Ahmed al-Safi in a televised speech from the holy city of Karbala following Friday prayers. Over three months ago, al-Sistani suspended his weekly political sermons after his repeated demands that the country's politicians tackle corruption went unheeded.

The IS bombings this week exposed lingering gaps in Baghdad's defenses, which are manned by an array of security agencies and militias that don't always cooperate. They also point to the resilience of the extremist IS group, which has increasingly resorted to bombings in civilian areas far from the front lines as it has lost some territory to Iraqi forces backed by U.S.-led airstrikes.

On Thursday evening, hundreds took to the streets in Baghdad's Sadr City to demand government accountability for the security breaches. Protesters carried signs calling for the interior minister to resign while others called for the minister of defense and Prime Minister Haider al-Abadi to also step down.

Anti-government protests first erupted last summer as temperatures soared and millions were left without electricity. While al-Abadi proposed a series of government reforms in August 2015 that he claimed would combat corruption, very little has been implemented. Repeated delays in Iraq's parliament sparked another wave of protests this year, led by influential Shiite cleric Muqtada al-Sadr. In late April the cleric's supporters stormed Baghdad's heavily fortified Green Zone and the parliament building.

Since the unprecedented breach of the compound, which is home to many of Baghdad's ministries and foreign embassies, the country's government has been largely gridlocked as many lawmakers are boycotting parliament.

Iraqi officials and analysts warn that the deepening political crisis may be distracting Iraq's security forces from the fight against IS. The Iraqi government claims IS only occupies 14 percent of the country's territory after a string of battlefield losses, but the extremist group still controls key border areas between Iraq and Syria as well as Iraq's second largest city of Mosul.