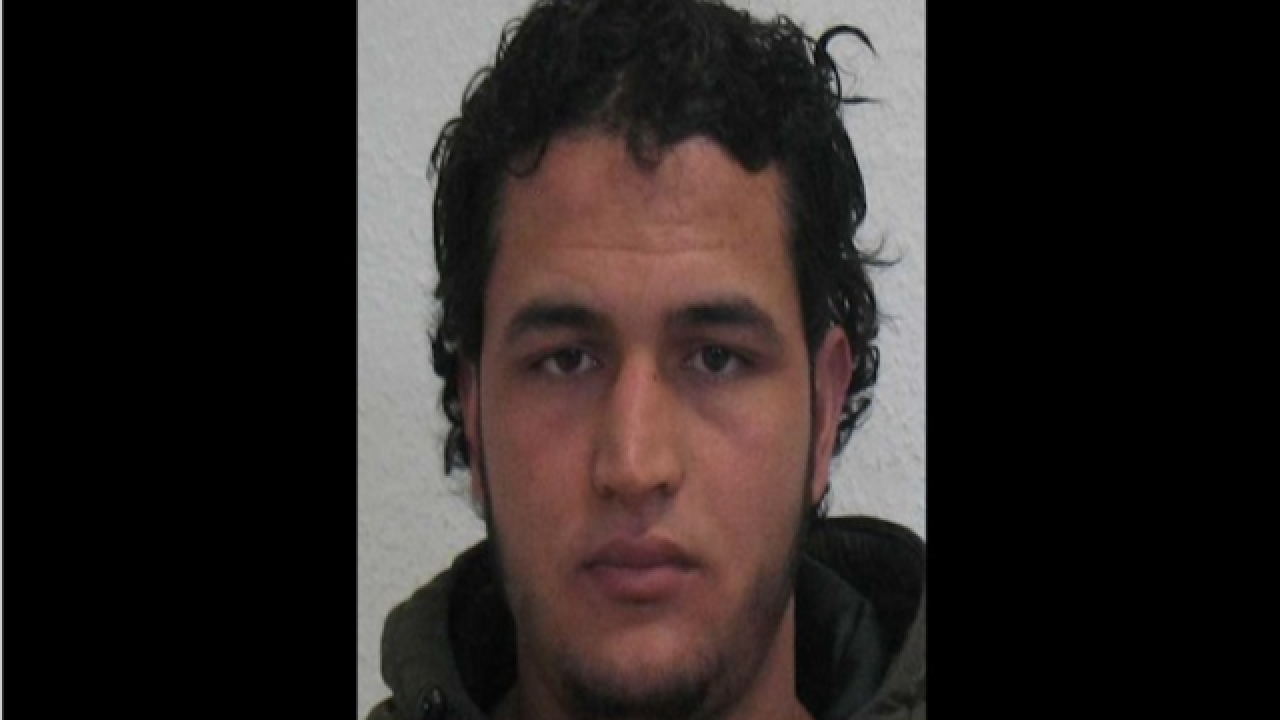 BERLIN -- The German federal prosecutor's office on Wednesday issued a wanted notice for Anis Amri, a 24-year-old man born in Tunisia, in connection with Monday's attack on the Christmas market at Breitsheidplatz in Berlin, according to a statement.

Police have offered a reward of up to 100,000 euros. They say he is "under urgent suspicion."

The suspect's identity papers were found inside the cabin of the truck used in Monday's attack, which left 12 people dead and 48 injured, the official said. The man was born in 1992, he said.

An urgent manhunt is underway for the suspect, who is potentially armed and dangerous, before he can strike again, CNN terrorism analyst Paul Cruickshank said.

Authorities on Tuesday released another man who was arrested shortly after the truck smashed into the market, saying there was no evidence to connect him to the attack.

Police have appealed to the public for any digital videos and photos they have of the attack or possible suspects. They tweeted Tuesday they were investigating 508 leads.

Attacker on the loose

ISIS claimed it had inspired the attack. The terror group's affiliated Amaq News Agency described the perpetrator as a "soldier of the Islamic State" who had acted in response to calls for attacks in the West.

German police said they are treating the attack as terrorism, but there is no evidence of a direct link with ISIS.

However, another German security official told CNN that investigators believe the Tunisian suspect is linked to a pro-ISIS network operating in Germany.

The main figure in the network, Ahmad Abdulaziz Abdullah -- a 32-year-old Iraqi national also known as Abu Walaa -- and four others were arrested and charged with terrorism offenses in November.

German federal prosecutors said then that Abdullah was the ringleader of a multiregional recruitment network. The group allegedly targeted and radicalized young Muslims in the northwestern states of Lower Saxony and North Rhine-Westphalia.

On Tuesday evening, police released an asylum-seeker believed to be from Pakistan who had been detained in the immediate aftermath of the truck attack. According to German media, witnesses had said he had been driving the truck.

But Peter Frank, general prosecutor at Germany's Federal Court of Justice, said that forensic tests offered no link between the man and the truck's cabin.

A Polish man found shot dead inside the truck has been identified as its original driver, according to German media.

He was not driving during the incident, police said. The gun used to kill him has not yet been recovered.

The slain driver may have been involved in a struggle with the suspect inside the truck's cabin before he was shot, Cruickshank said. This could be when the suspect's identity papers were dropped, he suggested.

The truck, which was owned by a Polish company, was hauling 25 tons of steel before it was steered into the crowd, according to its owner, Ariel Zurawski.

Zurawski identified the slain driver as his cousin. He said his relative was happy to be finishing his route from Italy to Berlin and was looking forward to returning to Poland soon.

"He was asking if he should be back home by Thursday night because he still needed to buy a Christmas gift for his wife," Zurawski said.

German authorities have not publicly named any of the victims, and police have asked people not to post videos or photos of them as a sign of respect.

But Italy's Foreign Ministry said Wednesday that Italian national Fabrizia Di Lorenzo was missing following the attack and that her family was now in Berlin. The ministry said it was waiting for German investigators to complete their work before issuing a statement.

Italy's ANSA news agency reported the missing woman, 31, worked in Berlin and that her cell phone was found at the attack scene.

German President Joachim Gauck visited some of the injured Wednesday at the Charité hospital in Berlin.

He told reporters afterward that his visit was intended "to give support for the injured people, to show them the whole nation is supporting them" and that they are not alone as they fight for their lives.

Despite the manhunt, Berlin appeared much quieter Wednesday than was the case in Paris and Brussels, Belgium, in the aftermath of recent terror attacks there, when the noise of helicopters and sirens filled the streets for days.

Berliners who came to leave flowers and candles at makeshift shrines near the Christmas market told CNN they would not allow the attack to change the way they led their lives.

One handwritten note left with a bunch of roses read, "You will not have our hate," echoing the words of writer Antoine Leiris after he lost his wife in the Paris attacks.

Dozens of people raised their voices in a tribute to those killed, singing songs such as "We Are the World and "Shine a Light."

Christmas markets across the city were closed Tuesday as Berliners gathered at the Kaiser Wilhelm Memorial Church near the scene of the attack to pay their respects to the victims.

German Chancellor Angela Merkel said she was "horrified and deeply sad about what happened" during a visit Tuesday to the scene of the attack.

She called for unity and said it would be "especially disgusting" if the perpetrator of the attack turned out to be an asylum-seeker, as police originally suggested.

Monday's attack could cause further political upheaval for Merkel, who has come under criticism over her government's generous acceptance of refugees. Germany has taken in more than 890,000 asylum-seekers in the past year, a much higher number than other European nations.

But a backlash has been growing, fueled in part by Islamist terror attacks in Germany and across the continent.