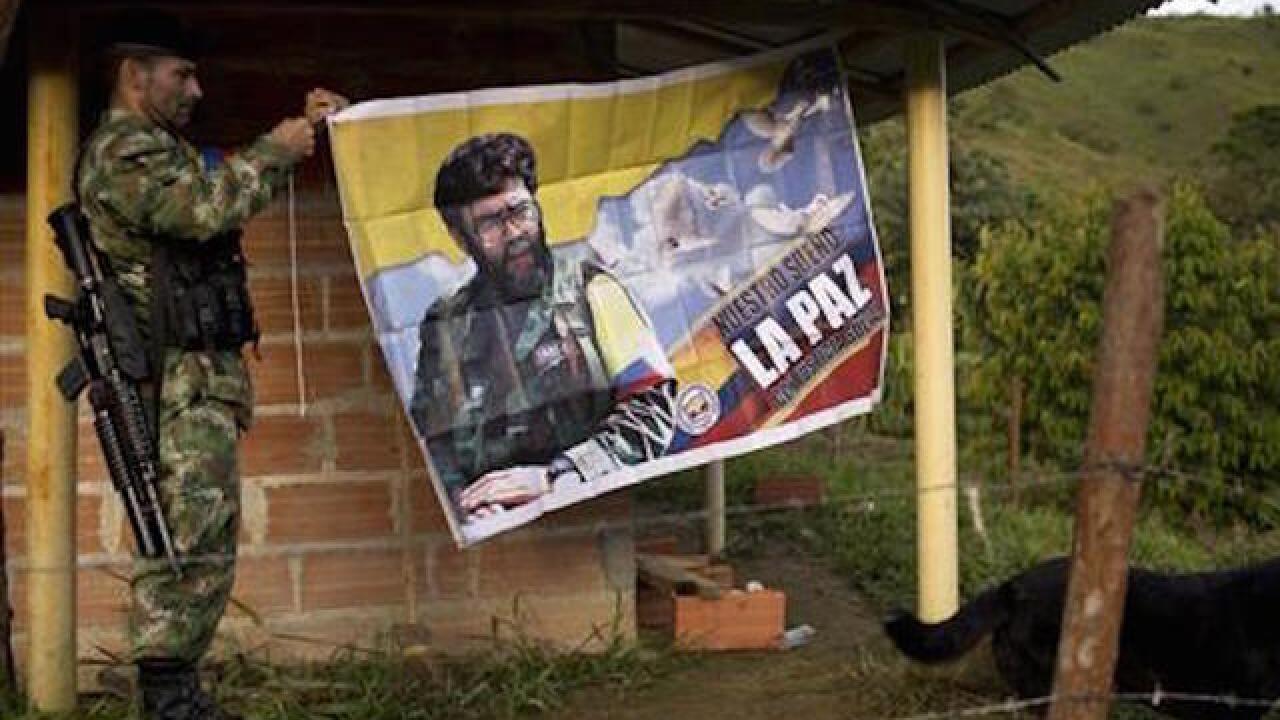 <p><span style="color: rgb(51, 51, 51); font-family: Verdana, Helvetica, Arial, sans-serif, Geneva; font-size: 11px; line-height: 15px;">FILE - In this Jan. 3, 2016 file photo, Orlando, a rebel fighter for the 36th Front of the Revolutionary Armed Forces of Colombia or FARC, hangs a banner featuring the late rebel leader Alfonso Cano with a message that reads in Spanish: "Our dream is peace with social justice," in their hidden camp in Antioquia state, in the northwest Andes of Colombia.</span></p>

HAVANA (AP) — Colombian President Juan Manuel Santos and the head of the country's leftist FARC rebels agreed Thursday on a cease-fire and rebel disarmament deal that moves the country to the brink of ending a 52-year war that has left more than 220,000 people dead.

At a ceremony in Havana, Santos and FARC commander Rodrigo Londono, better known as Timochenko, listened to the reading of a deal laying out how 7,000 rebel fighters will demobilize and hand over their weapons once a peace accord is implemented. In attendance was U.N. Secretary-General Ban Ki-moon, a special U.S. envoy and the presidents of Cuba, Chile, Venezuela and other Latin American countries.

A 15-year, U.S.-backed military offensive thinned rebel ranks and forced FARC's aging leaders to the negotiating table in 2012. In Santos, a U.S.-educated economist and scion of one of Colombia's richest families, the rebels found a trusted partner who hailed from the conservative elite but wasn't bound by its prejudices.

Most Deadly Terrorist Groups in Colombia since 2000 | FindTheData

Momentum had been building toward a breakthrough after Santos said this week that he hoped to deliver a peace accord in time to mark Colombia's declaration of independence from Spain on July 20. But the latest agreement went further than expected.

In addition to a framework for the cease-fire, both sides said Wednesday they agreed on a demobilization plan that will see guerrillas concentrate in rural areas and hand over weapons that had long been the vaunted symbols of their movement's origins as a self-defense force of peasant farmers attacked by the oligarchy-controlled state.

Negotiators in January agreed that the United Nations would be responsible for monitoring adherence to the eventual cease-fire and resolving disputes emerging from the demobilization.

With the latest advance, only a few minor items remain to be worked out for a peace accord. The biggest is how the final deal will be ratified and given legal armor so it won't unravel should a more conservative government succeed Santos, who leaves office in 2018.

Santos has also promised to let Colombians vote on accepting the final accord in a national referendum, and his government isn't taking acceptance for granted.

Fatalities and Injuries from Terrorist Attacks in Colombia | FindTheData

The proliferation of cocaine has fueled the conflict longer than any other in Latin America and will remain a powerful magnet for criminal gangs operating in Colombia's remote valleys and lawless jungles. Colombia is the largest supplier of cocaine to the U.S. and only a small fraction of the country's 12,000-plus homicides last year had anything to do with the conflict.

There is also the risk that the country's second rebel movement, the much-smaller but more recalcitrant National Liberation Army, could fill the void left by the FARC. That rebel group agreed to negotiations with the government earlier this year but those talks have yet to start because of Santos' insistence that it renounce kidnapping

But if the FARC honor their commitments and the fighters are successfully integrated back into society, the government could begin shifting resources away from the battlefield and toward attacking other forms of crime and the crushing poverty and inequality that it feeds on.

One wild card is the posture of critics like popular former President Alvaro Uribe, who spearheaded the military offensive against the FARC last decade. Partly because of his success beating back the FARC, Colombians almost unanimously refer to the rebels as "terrorists." Polls say most Colombians can't muster the thought of seeing rebel leaders behind atrocious war crimes walking the streets freely let alone occupying seats in a democratic congress whose legitimacy the FARC didn't even recognize until recently.

Uribe refused to comment on Wednesday's announcement, saying he was waiting more details.

Others couldn't hold back their excitement. Leftist Sen. Ivan Cepeda borrowed a phrase from Colombia's beloved Nobel Prize-winning novelist, Gabriel Garcia Marquez, to compare the prospect of peace to a "second chance on earth."

"It's time to rid ourselves of hatred, lies and fears and build reconciliation among all our compatriots," Cepeda, one of the government's most-trusted conduits to the FARC, said on Twitter. "Peace defeats death."