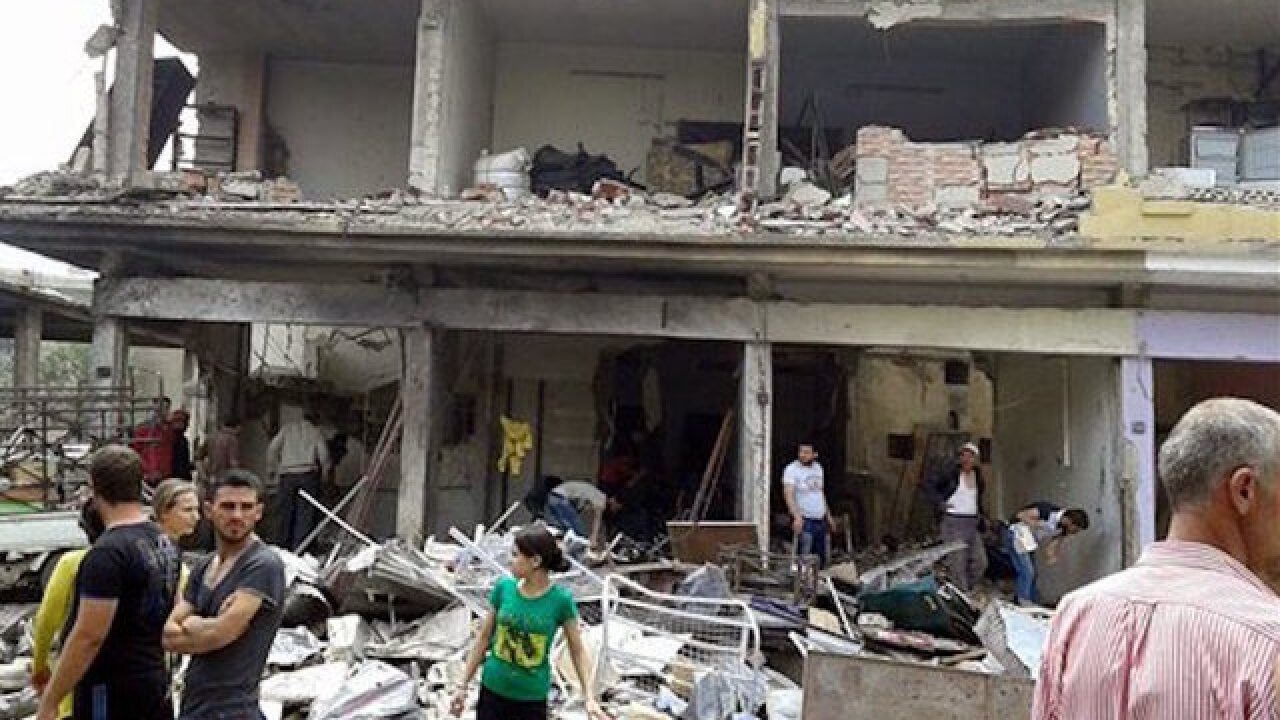 SANA via AP
Uncredited
<p>In this photo released by the Syrian official news agency SANA, Syrian citizens gather at the scene where two explosions struck in the village of Mukharam al-Fawkani, east of the central city of Homs, Syria, Thursday May 5, 2016. Two blasts struck a central Syrian village Thursday, killing at least six people and wounding dozens, hours after a truce brought relative calm to the northern city of Aleppo after weeks of escalating violence there. (SANA via AP)</p>

BEIRUT (AP) — A coalition of Syrian rebels and jihadists seized a strategic village from pro-government forces outside the contested city of Aleppo on Friday, signaling the reemergence of a powerful, ultraconservative insurgent coalition on the opposition's side in the Syria conflict.

Renewed fighting erupted around the village of Khan Touman hours after opposition fighters took the position from pro-government forces, the Britain-based Syrian Observatory for Human Rights, reported. Fighter jets, presumed to belong to either Syria or its powerful ally Russia, were launching strikes on opposition positions.

At least 43 insurgents and 30 fighters on the government side have been killed in the fighting since Thursday afternoon, according to the Observatory.

The offensive was commanded by the Jaish al-Fatah, or Army of Conquest, coalition, an ultraconservative group led by al-Qaida's Syria affiliate, the Nusra Front, and the jihadist militias Jund al-Aqsa and Ahrar al-Sham. The Observatory said other non-jihadist rebels fought for Khan Touman on the side of the coalition, as well.

The Army of Conquest seized Idlib, a strategic and symbolically important provincial capital, from government forces last year and threatened to make advances towards strongholds on the Mediterranean coast and toward Damascus. Russia intervened military on the side of the government partly in response to that threat.

But the coalition is internally divided over who it considers enemies and how it rules areas under its control.

"The suicidal Jund al-Aqsa brigade is ideologically close to Daesh," said Britain-based Syrian activist Asaad Kanjo, using the Arabic acronym for the Islamic State group. "Aqsa said it didn't want to fight Daesh and withdrew from the coalition that was suggested."

Kanjo followed the coalition's politics when he was living in Saraqib, near Idlib.

A partial cease-fire this spring between the government and certain rebel factions revealed further divisions in the Army of Conquest.

Aqsa and Nusra fighters suppressed popular demonstrations across Idlib province against the black Jihadist flag, and moderate rebel factions seized on the discontent to try to sideline the jihadists within the opposition. The political shifts split the allegiances of the internally-divided Ahrar al-Sham group. Nusra and Ahrar al-Sham are two of the country's most powerful militias.

But the recent collapse of the cease-fire and resumption of hostilities in April appears to have reunified the anti-government opposition.

The return to peace would fragment the Army of Conquest coalition once again, Kanjo said.

Khan Touman is just 4 miles (6 kilometers) from Aleppo, Syria's largest city and onetime commercial capital. It overlooks the main route between Damascus and Aleppo, parts of which remain under opposition control.

"It is part of the government's defensive line in south Aleppo," said Observatory head Rami Abdurrahman.

The vital gas fields, which were in government hands, fell to the extremist fighters Wednesday.

And a Syrian military official denied that the army carried out any operation against the Sarmada refugee camp Thursday, saying all reports about the attack are false. Air strikes on the camp, in a rebel-held area near the Turkish border, killed at least 28 civilians, including women and children. The official spoke to AP in Damascus on the condition of anonymity.