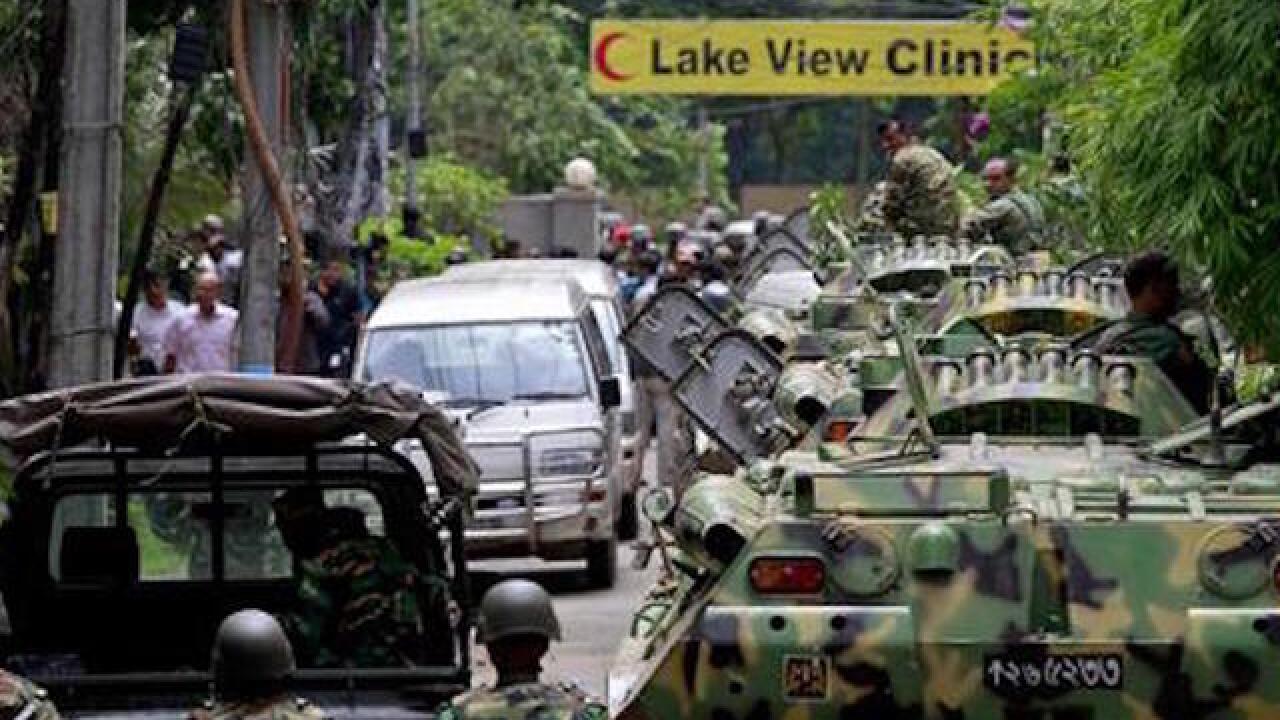 NEW DELHI (AP) — Two men who had not been heard from since last month's restaurant attack in Bangladesh were arrested Thursday on allegations they were involved in the deadly siege carried out by radical Islamists.

British national Hasnat Karim and University of Toronto student Tahmid Hasib Khan were arrested in different areas of the capital, Dhaka, and police were seeking court permission to question them for 10 days, said Masudur Rahman, a Dhaka police spokesman.

Five armed gunmen attacked the Holey Artisan Bakery restaurant on the night of July 1, killing 20 people and holding others inside hostage. Security forces stormed the restaurant on July 2, killing the gunmen and rescuing the remaining 13 hostages. Those killed were nine Italians, seven Japanese, three Bangladeshis and one Indian.

Karim, 47, and Khan, 22, were known to have been inside the restaurant, but Bangladeshi authorities and police denied having them in custody after the attack. Their families and New York-based Human Rights Watch had appealed for news about them and said the authorities were holding the men.

Karim was in the restaurant with his wife and two daughters and the family had said they were there to celebrate the birthday of their daughter.

But a South Korean man from a nearby apartment had shot a video of the scene in the restaurant in which Karim was seen talking to the attackers.

Police also said there were photographs showing Karim smoking on the rooftop of the building with two of the attackers standing behind him.

"We are taking them to a court and we have already sought 10 days police custody for further questioning," Rahman said soon after the arrests.

Hours after his arrest, Karim's family said he was innocent and should be released immediately.

"He had no links to any terrorist group or organization. He and his family were celebrating his daughter's 13th birthday when they became victims of a terrorist attack," Rodney Dixon, the family lawyer, said in a statement.

He said the family was "willing to cooperate fully with the authorities to prove his innocence."

"There is clearly no evidence to charge him and he should be let go without any further delay," the family said.

"He is not a suspect and has not been charged," the statement said.

Karim had lived in UK for nearly 20 years and returned to Bangladesh a few years ago when he began teaching in a private university in Dhaka. Later, he was under investigation for his alleged involvement with a banned Islamic group, Hizbut Tahrir.

He left the university in 2012 and became a businessman. One of the attackers has been identified as his former student.

Bangladesh police have said they are investigating whether the attackers had links to the Islamic State group, which claimed responsibility for the attack. The claim was rejected by Bangladesh's government, which said IS has no presence in the country and instead blamed a local radical group, Jumatul Mujahedeen Bangladesh.