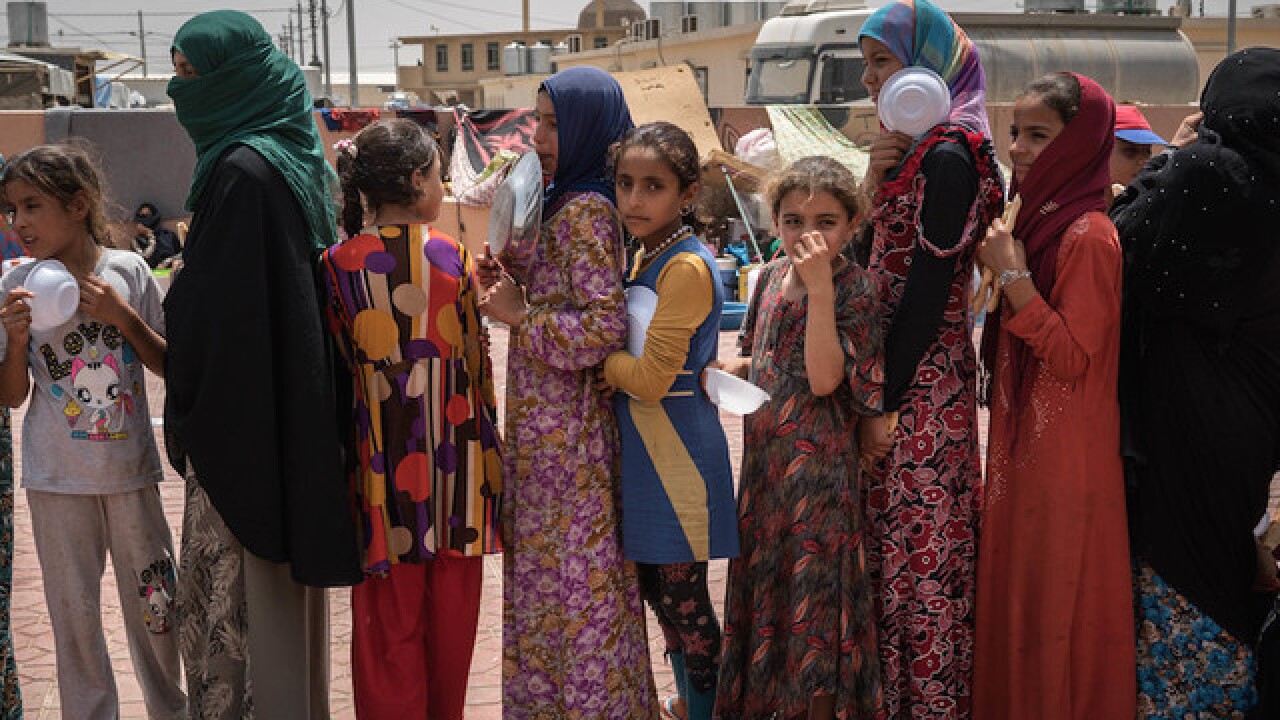 Alice Martins
<p>Women and children stand in line to receive a portion of food at Dibaga camp for internally displaced civilians in Iraq, on August 7, 2016.</p>

IRBIL, Iraq (AP) — The U.N. refugee agency says more than 100,000 people have been displaced as Iraqi forces clear territory ahead of the critical battle for Islamic State-held Mosul — a dire statistic raising concerns that a million more could be displaced from in and around Iraq's second-largest city as the operation moves forward.

Iraq's leaders have repeatedly promised that Mosul — which has been in the hands of IS militants for more than two years now — will be retaken this year, though U.S. officials have said that timeline is unrealistic.

About 43,000 people have been displaced from the Mosul area since March and 66,600 people from the nearby Shirgat area since June, according to UNHCR statements this week.

Clearing operations in Shirgat, south of Mosul, are seeking to cut supply lines used by the Islamic State group to move fighters, equipment and provisions in and out of the Mosul area. Iraqi forces are also slowly clearing villages south of Mosul under close air support from the U.S.-led coalition.

"Some days we receive 500, other days we receive 1,000 (displaced) people," said Brigadier Mahdi Younis, with Iraq's Kurdish peshmerga forces. "With every small movement of the Iraqi army, there are 1,000 more displaced."

Stationed at a base in Makhmour, some 25 kilometers (15 miles) from the front lines, his men screen displaced civilians as they escape IS-held territory.

From the nearby front line near the liberated Qaraya air base, smoke billowed on the horizon from fires lit by IS fighters in an attempt to obstruct airstrikes.

Outside Younis' air-conditioned office at the base, a handful of families from villages near Mosul waited at a checkpoint to be driven to a nearby camp. Some had walked for hours to reach safety, other walked for days.

The Dibaga camp for the displaced, within Iraq's Kurdish region south of Mosul, is already overflowing from the influx, and thousands more have been left without shelter.

Families huddling in the shade near a school playground said they arrived with nothing except what they could carry. Thousands have been forced to sleep out in the open for weeks before they are allocated a tent on the camp's edges. Without enough blankets and mattresses, many said they have resorted to sleeping on flattened cardboard boxes.

In the western Anbar province, where Iraqi forces cleared cities and towns of IS earlier this year, more than a million people remain displaced, most of them unable to return home.

Overall in Iraq, more than 3.3 million people have been forced from their homes since IS first began growing in strength in early 2014, according to the United Nations.

"We're not just focusing on the military dimension of the Mosul campaign," Brett McGurk, the U.S. representative to the anti-Islamic State coalition, told reporters in Baghdad on Thursday.

More than a dozen nations pledged more than $590 million in humanitarian aid money for Iraq at an international pledging conference in Washington last month. But the U.N. says it still has less than half of the funds needed to prepare for the Mosul operation.

The United States alone has spent more than $8.4 billion in the military campaign against the Islamic State group. As of June 21, the total humanitarian contribution to Iraq from the U.S. was $798 million since the 2014 fiscal year.

Iraq's displaced are facing some of the same troubles that those who fled the civil war in neighboring Syria, where IS also controls large patches of territory, have struggled with.

Nearly 5 million Syrians have been registered with the U.N. as refugees — that is, displaced beyond Syria's borders — in what is the largest refugee population today. The U.N. refugee agency says a further 6.5 million are displaced inside the country. Also, some 600,000 Syrians are trapped under siege, needing urgent access to food and medical supplies, the U.N. says. A further 250,000 are trapped by government forces in the Syrian city of Aleppo.

In June, when Iraqi forces were retaking the Iraqi city of Fallujah, west of Baghdad, tens of thousands were left stranded in the Anbar desert — in the summer heat, without shelter and with little water or food.

"We had some real problems in Fallujah and we want to make sure some of those problems are not repeated in Mosul," McGurk said. "Mosul will be the biggest challenge."

The humanitarian dimension of the operation "will be extremely difficult, it will not be perfect," he added.