Local home prices rose again in February while sales slowed down amid a shrinking housing supply, according to a report released Wednesday by the Greater Las Vegas Association of REALTORS.

Local home prices rose again in February while sales slowed down amid a shrinking housing supply.

Lila Elsayeh says it's been a tough search for her dream home.

2018 GLVAR President Chris Bishop said Southern Nevada still has less than a two-month supply of existing homes available for sale when a six-month supply is considered a balanced market.

By the end of February, GLVAR reported 3,653 single-family homes listed for sale without any sort of offer. That’s down 34.3 percent from one year ago. For condos and townhomes, the 679 properties listed without offers in February represented a 10.4 percent drop from one year ago. The inventory of condos and townhomes listed for sale is as low as it has been since 2004, Bishop added.

February’s sales dip is a departure from the recent trend in home sales, which have been increasing over the past few years. In fact, GLVAR reported that the 46,598 existing local properties sold during 2017 made it the third best sales year on record and the best year for existing local home sales since 2011.

GLVAR reported that 32.4 percent of all local properties sold in February were purchased with cash, compared to 31.4 percent one year ago. That’s well below the February 2013 peak of 59.5 percent, indicating that cash buyers and investors are still active, but are playing a much smaller role in the local housing market than they were five years ago.

"That's why they have down payment assistance programs for teachers, for anybody. The qualifications are pretty easy as long as your credit score is decent... If you're even interested, start a year early because it takes a long time to get the loan approved, to get your credit score up for whatever reason. Everyone has different issues."

At the same time, the number of so-called distressed sales continues to decline. GLVAR reported that short sales and foreclosures combined accounted for 3.8 percent of all existing local home sales in February, compared to 10.6 percent of all sales one year ago.

These GLVAR statistics include activity through the end of February 2018. 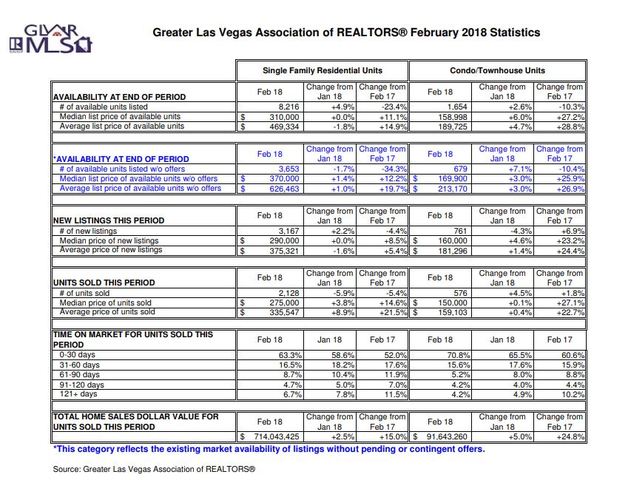 If you are looking to buy a home and need financial assistance, you can go to the Nevada Housing Division website or check with the FHA Down Payment Grants for 2018 - Nevada.