Can the Raiders still move to Las Vegas? 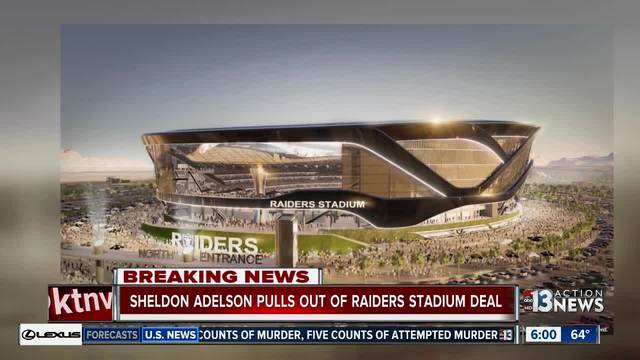 It comes after Adelson says the family was excluded from the proposed lease agreement that the Raiders presented to the Stadium Authority last week. 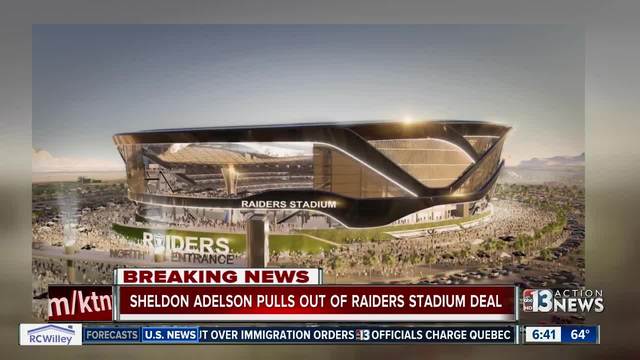 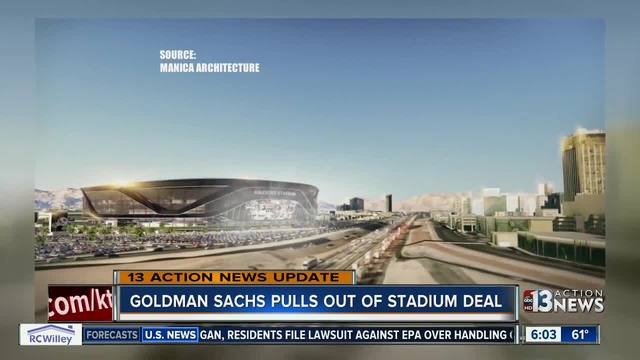 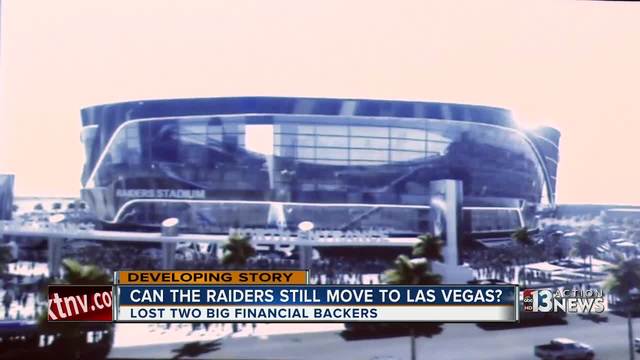 UPDATE ON JAN. 31: 13 Action News spoke with a representative from Goldman Sachs, who says their involvement with the deal was partnered with Sheldon Adelson. They say as of now, since he's backed out, they're no longer involved with the deal either.

Goldman Sachs previously announced that they would finance the proposed NFL stadium in Las Vegas.

Now, supporters of the move would need to have other investors put up the extra $650 million needed.

"Goldman Sachs does the math better than anyone else," he says.

"This isn't the kind of the thing you wake up in the morning and say gee, I got $650 million I can invest in a stadium in Las Vegas," said proponent and Clark County Commission Chairman Steve Sisolak. "This is usually a long process to get to that point."

However, his colleague Chris Giunchigliani opposed the plan from the start and thinks it's gone far enough.

"It's on life support maybe would be the best analogy and maybe someone needs to pull the plug in the most humane way possible," she said.

It comes after Adelson says the family was excluded from the proposed lease agreement that the Raiders presented to the Stadium Authority last week.

The week before that, the Raiders filed paperwork to relocate to Las Vegas to the NFL.

Adelson had pledged up to $650 million toward building the stadium and was instrumental in getting legislation passed so public money could be used for its construction.

But the Raiders have reportedly said that Goldman Sachs could help with funding the project.

In a statement, the Raiders said they deeply appreciate the efforts of the Adelson family but they still plan to honor owner Mark Davis' commitment to Nevada and Gov. Brian Sandoval to relocate the team to Las Vegas.

The Oakland Raiders came before the Las Vegas Stadium Authority last week with a proposed lease agreement that has sent shockwaves through our community.

It was certainly shocking to the Adelson family. We were not only excluded from the proposed agreement; we weren’t even aware of its existence.

In addition to being discouraged by the surprise submission, I was deeply disappointed for the disregard the Raiders showed our community partners, particularly UNLV, through the proposed agreement.

It’s clear the Raiders have decided their path for moving to Las Vegas does not include the Adelson family. So, regrettably, we will no longer be involved in any facet of the stadium discussion.

While this is not the result my family was hoping for, I am very appreciative of the countless people who have given considerable time and energy to this process, especially so many of our elected officials who have made this a top priority for Southern Nevada.

“I am sorry to hear about this development. We would not be as close as we are to having an NFL franchise in Las Vegas without the initiative and leadership of Dr. Miriam and Sheldon Adelson and their team. I sincerely appreciate the time and effort they all have contributed to this project, and I remain hopeful that we will see our NFL dream come true.”

“I would like to thank the Adelson family for their role in bringing a publicly-owned stadium to Las Vegas. It is unfortunate that they were unable to come to terms with the Raiders. The terms of the legislation do not change and the state’s contribution will not increase as a result of this announcement. I am hopeful that the Raiders are working to secure the additional funds that would have been provided by the Adelson family. At a minimum, we have set up a framework and funding source for building a stadium for UNLV. The process in place outlines that the Stadium Authority Board will continue to evaluate stadium site locations, development plans, and vet all operating agreements.”

“The Las Vegas Stadium Authority was notified this afternoon that the Adelson family will no longer be involved in the Las Vegas stadium project. The Authority is grateful for the Adelsons’ significant time and effort during the past year, not only to bring an NFL franchise to Nevada but also to construct a facility that would provide a new home for UNLV football and enhance our state’s core tourism economy.