What can be done to prevent violence in CCSD schools

Keeping your kids safe at school is an obvious priority. But reports of serious incidents are on the rise CCSD schools. What can be done to stop the violence?

This story is part of our Raising The Bar series. Together with parents, educators, business and community leaders, 13 Action News is leading the discussion on improving education in Southern Nevada. We will connect families with solutions that empower our community to build a foundation for a successful future. If you have an idea for a Raising The Bar story, click here to email us at raisingthebar@ktnv.com.

Keeping your kids safe at school is an obvious priority. But reports of serious incidents are on the rise. One student was killed on the edge of a high school campus.

We get an exclusive look at what's being confiscated on campus, from drugs to dangerous weapons. In this Raising the Bar special investigation, we take concerns about escalating violence directly to the new superintendent of Clark County schools.

So far this year, there's been a serious incident at a valley school nearly every week.

18-year-old Dalvin Brown was shot and killed on the edge of the Canyon Springs High School campus.

Elsewhere in the district, nearly a dozen reports of kids showing up for school with guns, including a BB gun and 9-millimeter and 40 caliber handguns.

The gun incidents are widely reported, but there's a lot more going on behind the scenes as seen in photos, most of them from Basic High School but also a middle school. I got an exclusive look at the drugs and weapons school security is confiscating from students. Stuff you probably don't hear about, like a butterfly knife, and a 10-inch-long double-bladed bat wing-style knife. There are switchblades, folding knives and sheathed daggers.

See photos in the media player at the top of this page.

Campus security took a photo of a student's mouth after her tooth was knocked out in a fight. 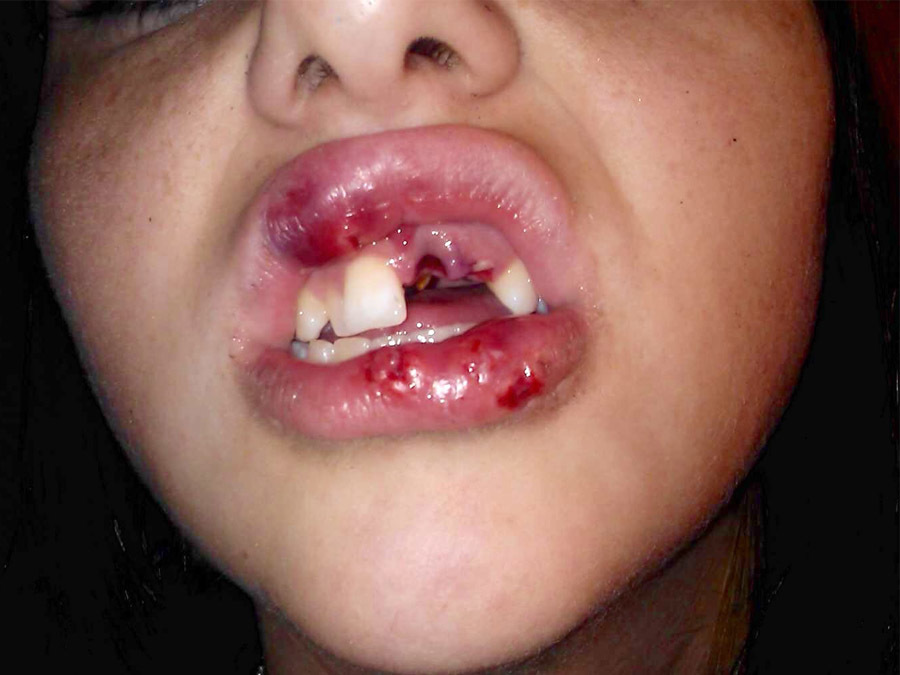 And then there's a recent video from Basic High where a student punched a staff member during a fight is part of an ongoing school police investigation.

"We're working and trying to address that to minimize what you're talking about with the fights," says Dr. Jara.

I sat down with CCSD's new superintendent to ask some serious questions.

Darcy: "Are you seeing an escalating environment too? The people on the ground are saying they are and aren't sure what the solution is."

Dr. Jara: "It gets into a culture. How do you help principals and what support can we provide to really find a way to change that culture to more of an academic culture where kids feel that they feel valued."

The data over the last eight years clearly shows an escalation:

And a closer look at assaults against staff is telling. The trend is most noticeable with this spike from 2015 to 2016. Only about a thousand more students in the district, but violence against staff increased from 370 to 624 incidents.

"Can we do better? Absolutely," says Dr. Jara.

"Number one: discipline. Provide the appropriate discipline because I want my children, my students to feel safe to learn. And then also our employees feel safe."

And he says he's looking at whether the school buildings should be redesigned.

"Part of the work is really looking at our campuses and how do we find ways to narrow down or not as have as many entry points to protect our students," Jara explains.

In 2016, about the time violent incidents rose most sharply, CCSD closed several behavior schools--campuses where students are sent when they get in serious trouble.  There used to be seven. Now there's only three: Peterson, Cowan and South Academic Center.

Insiders tell me fewer schools for behavior-problem students mean fewer consequences.  I'm told discipline often boils down to a time-out or short in-school suspension before troubled students are simply sent back to class.

"I need more officers. I need to have two officers on campus," says Wilson. "They're a deterrent. When kids see an officer, they're generally not going to be doing something they should not be doing."

He recalls the time someone set off an explosive device in a trash can.

"Caused 3rd degree burns on a girl who was sitting next to it," says Wilson.

The District will soon roll out a new program of random student searches using handheld metal detectors.  In the meantime, parents should check backpacks to ensure kids don't take any weapons to school.

Dr. Jara says everything from metal detectors to redesigning facilities is on the table, but cautions that there's no simple solution.  "It's a multi-pronged approach that is on the top of my list."

Resources to help students and parents:

SafeVoice is an app that allows students or parents to report violence or safety threats anonymously.