After the initial report on Feb. 28, police made contact with the man in question. According to police, the man was there to pick up his nieces at Mendoza Elementary.

Police said the man has a faulty door that pops open. So when he pulled over to the side of the road, the door popped open, startling the student who thought he was trying to kidnap her.

John F. Mendoza Elementary School principal Rebecka Christensen sent out a letter to parents informing them of an attempted kidnapping near the school.

According to the letter, a man with a mustache attempted to abduct one of the students around 3:30 P.M. on Feb. 28 at the school located on 200 South Sloan Lane near Charleston Boulevard. The student was walking home when she was approached by a man driving a gray truck.

The student ran home and was unharmed during the incident.

Law enforcement is looking into the situation but the principal urges parents to discuss safety with their children as an added measure of precaution. 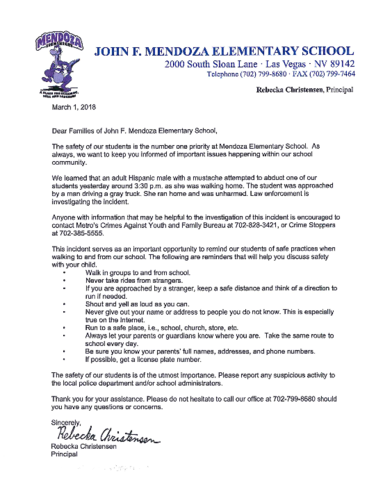