A look at what to expect from Thursday's meeting.

Las Vegas Sands owner and Republican mega-donor Sheldon Adelson is proposing to build a nearly $2 billion domed stadium for an NFL team along the southern end of the Las Vegas Strip — and he is asking for public funding of $750 million in increased room taxes to help pay for it.

Developers have sent a deal sent to Gov. Brian Sandoval, whom they hope will call a special session of the state Legislature to approve the deal before the Nov. 8 election.

But negotiations had been ongoing, with an advisory committee made up of major casino companies and a handful of public officials meeting weekly and questioning the developers on everything from infrastructure costs, funding and where the stadium would be built.

There’s multiple issues at play, and with $750 million in public funds potentially on the line (which would be roughly 10 percent of the state's two-year spending plan), the stakes are high.

Here’s what you should know about the stadium deal.

How we got here

The stadium’s fate rests largely with the the Southern Nevada Tourism Infrastructure Committee, an advisory body made up of casino executives, local office-holders and state economic development offers that was initially formed to review and recommend infrastructure improvements in Las Vegas.

That changed in April, when the Sands, Raiders owner Mark Davis and soccer star David Beckham pitched the stadium proposal to the committee, promising to move the NFL franchise to Las Vegas if they could ensure a significant enough public contribution.

Many details have changed since the initial presentation, including moving the proposed site after Southwest Airlines raised concerns, as well as the total cost of the publicly-owned stadium creeping up to $1.9 billion.

At this point, the developers say they have three “non-negotiable” provisions: no less than $750 million in public funding, no public profit-sharing from stadium proceeds, and no hard dollar cap on the developer’s preferred rate of return.

Developers want to build a partially publicly-funded $1.9 billion stadium on one of two plots of land near the southern end of the Las Vegas Strip.

Stadium backers — led by Adelson and dozens of lobbyists and Sands executives — have proposed a public-private partnership with a public contribution of $750 million from a small increase in county hotel room taxes.

The current plan calls for a 0.88 percent hotel room tax increase along the Strip, and a half percent increase to the room tax elsewhere in the 25 miles surrounding the proposed stadium. (That would cover most of Las Vegas but not the entire county.) Sands lobbyists have billed the proposed increase as a “tourist tax,” which Nevada residents MOSTLY wouldn’t have to pay.

An increase would mark a modest jump to the closely-guarded county room tax, which varies from around 13 percent for Strip properties to 10 percent at the lowest. The largest chunks of tax revenue are directed toward K-12 education (38.7 percent) and the Las Vegas Convention and Visitors Authority (32.1 percent) -- a private-public agency focused on tourism -- and managing a 3.2 million-square-foot convention center.

So how would the public funding aspect actually work? Draft legislation reviewed by the committee (which is still subject to change) gives a few hints, including requiring the Clark County Commission to issue $750 million worth of municipal bonds to cover the initial construction costs.

Developers say the proposed 0.88 percent room tax increase will bring in roughly $50 million per year, but if projected revenue fell short of that figure, the responsibility of making bond payments lies with the county commission and the public — not the Adelsons or the Raiders.

Stadium backers point out that the proposed 0.88 percent room tax increase is large enough to cover 1.5 times what it would take to repay the flat $750 million operating cost, which they say guards against a future recession.

Developers say all bond-funded projects — schools, road construction, etc. — would be at risk if room tax revenue were to fall at a rate that required the county to somehow make up the deficit or declare the bonds defaulted.

If all proposed hotel taxes increases are approved, Vegas’s room tax rate could increase from 12.9 percent to 14.28 percent. 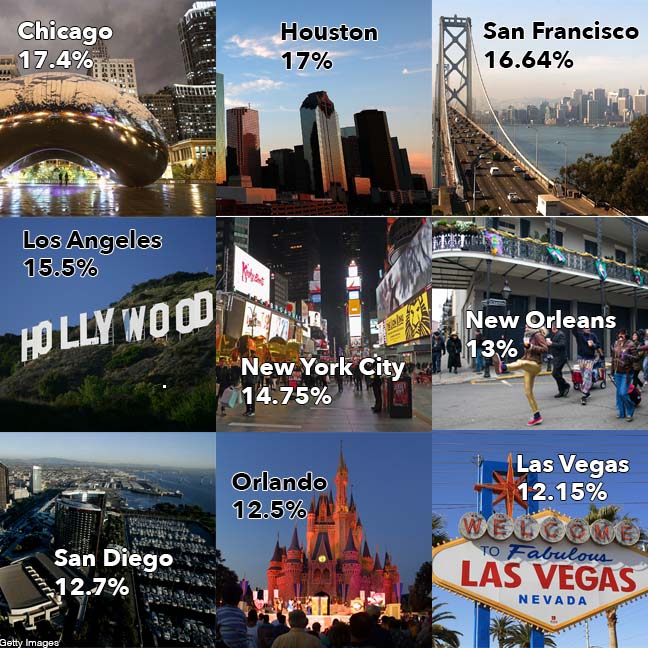 Where the rest of the funding comes from

Adelson, who Forbes estimates is worth $30 billion, says he would put $650 million of his own money to fund the remaining cost, as well as cover any overruns. 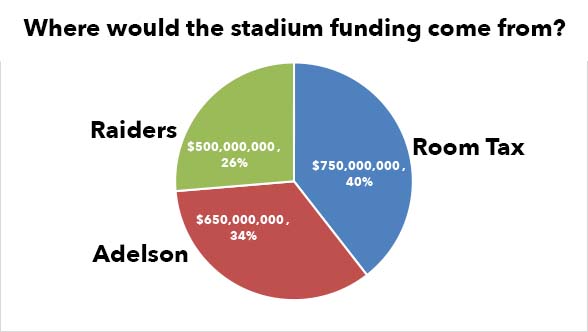 The advisory committee and the developers are still tangling over who holds responsibility for potential infrastructure costs like expanded roads and other upgrades to avoid snarling traffic on game days. The current plan allocates $375 million to land acquisition and on-site improvements like parking lots and developers say they’ll fund infrastructure costs past that amount as long as it isn’t “cost-prohibitive.”

Developers are promising that a stadium will deliver a massive economic boon, including the equivalent of 8,000 full-time jobs and hundreds of millions of dollars in economic impact.

This analysis is based on a report authored primarily by University of Michigan professor Mark Rosentraub on the potential benefits of a new domed stadium to Las Vegas.

Despite rosy claims, the vast majority of economic studies indicate that publicly-subsidized stadiums have a small to negligible economic impact and rarely result in large economic spillover gains.

A 2011 Holy Cross University study delved into some of the common pitfalls around economic impact promises and found that the methodology used in many such studies is “fatally flawed” and biased toward unrealistic economic impacts.

Study authors concluded that measuring the efficiency of public stadium subsidies as a tool to spur economic development is the most important factor to consider.

“The litmus test arguably should not be whether sport induces an increase in economic activity, but rather is it the most efficient method for improving the economy,” they wrote.

The Rosentraub/UNLV study does try to control for substitution effects and other pitfalls that befall similar stadium studies, and “conservatively” estimates the number of large-scale events a new stadium would attract.

Regardless of economic impacts, the total dollar amount of the subsidy would be at the “front of the pack” compared to other new stadium deals.

Members of the advisory committee haven’t rubber-stamped the proposal; several members continue to pepper the developers with questions and concerns about the deal.

Clark County Commissioner Chris Giunchigliani is a vocal opponent. She submitted written opposition to the stadium in a letter sent to advisory committee chairman Steve Hill.

“Room taxes are public and if someone wishes to build a stadium they should use their private dollars to build it — no public taxes should be utilized in any format,” she wrote.

The stadium also faces an opponent in Culinary Local 226, the state’s largest union, which publicly came out against the deal. Other unions, like the local buildings and trades council, support the proposal.

Other progressive groups are taking a much more active stance opposing the stadium, with several launching the website stadiumscam.com and directly lobbying lawmakers.

Any tax increase — whether for a new stadium or convention center expansion — requires approval of two-thirds of the state’s part-time Legislature, which would have to be called into special session by Sandoval to approve any deal before the Legislature goes back into session in February 2017.

Developers face a tight deadline between the upcoming November election and the NFL’s owners meeting in January 2017 and are calling for a special session to start in mid-September.

But there are political concerns. Nevada law prohibits legislators from soliciting or accepting any campaign contributions immediately after a special session is called and for a 15-day period afterwards, blocking out a crucial fundraising time for many legislators.

Sandoval faces a tough political puzzle in blocking out weeks of fundraising while trying to hold Republican majorities in the state Assembly and Senate, especially after shepherding a record-breaking tax increase to help pay for K-12 education funding in 2015.

The Republican governor has consistently said that he won’t make any decision on calling a special session until the committee submits its recommendations.

Legislators including state Senate Majority Leader Michael Roberson — prominently featured in a May promotional video for the stadium — said the “political reality” is that a stadium deal would need to be tied to expanding the publicly-backed Las Vegas Convention Center.

Adelson is a prolific state level political donor, with the billionaire and his companies directly donating at least $200,000 to legislative candidates before the state’s 2016 primary election. He’s also been a prolific donor to Sandoval, giving more than $336,900 directly to the candidate and his associated political action committees.

An article in the Las Vegas Sun detailed the lobbying efforts being undertaken by stadium developers, including calling some lawmakers several times a day. Only a handful of Democratic lawmakers have spoken out against the deal.

If a two-thirds vote seems unattainable, the state Legislature does have the option to pass the actual decision-making process off to the seven-member Clark County Commission.

Nevada’s constitution requires a two-thirds vote for any tax increase, which can be a tough sell given the large number of Republican legislators who sign no-tax pledges and Democrats wary of publicly funding a stadium. But a work-around exists — only a simple majority of lawmakers are needed to approve enabling taxing legislation, which essentially punts the actual tax decision to a local government.

A similar situation played out in 2013, where the state Legislature approved a law enabling the Washoe County (Reno) Commission to raise sales taxes to fund school construction. Commissioners ultimately declined to vote on the issue.

Stadium developers say they’re prepared for “either contingency,” and said they believe they have support of the necessary two-thirds of legislators.

Even if a stadium deal is approved on the state side, the Raiders still need to gain the approval of three-fourths of team owners to actually relocate to another city.

Current NFL policy requires teams submit relocation bids to the League by Feb. 15 of the year the move is scheduled to occur.

A vote to move the team would likely come in January during the league’s team owners meeting, but the Sands says earlier state approval of a stadium is needed in order to garner support from other league owners.

If a stadium deal is approved and the Raiders back out, the current draft legislation calls for creation of a smaller stadium to be built to house the UNLV football team.