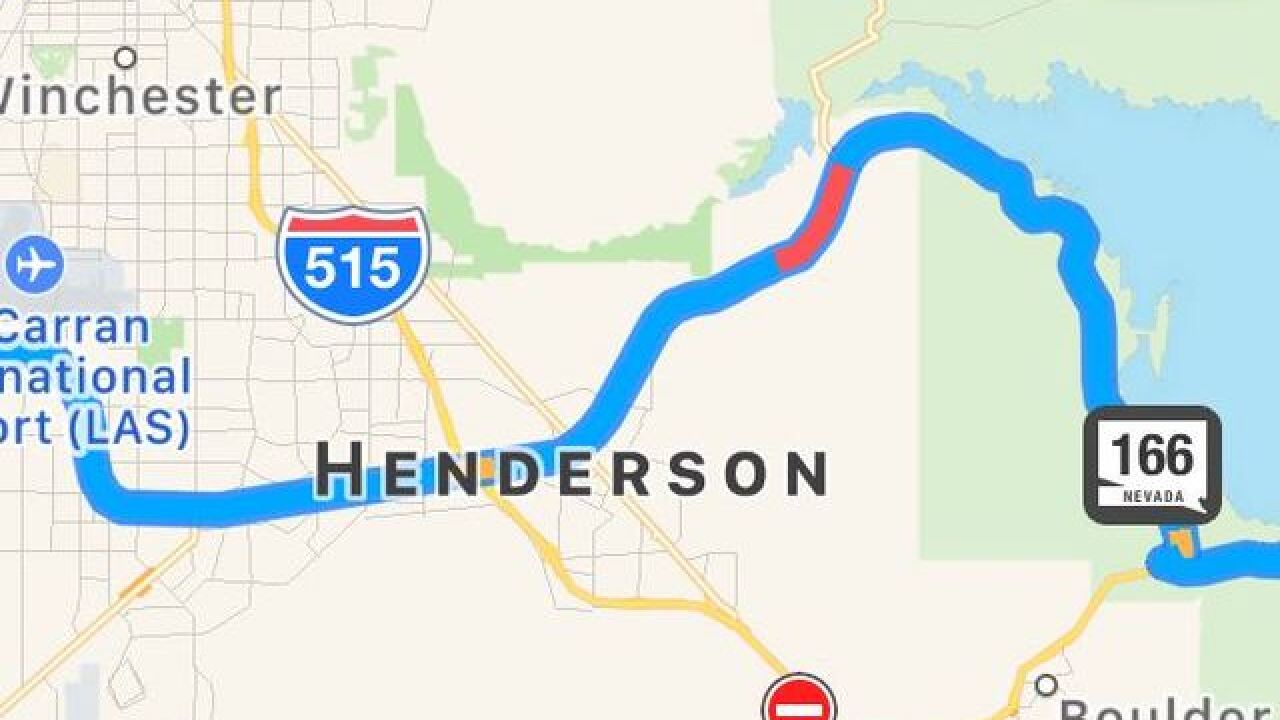 11:00 PM UPDATE: It appears Apple is getting the message that Interstate 11 is open.

As of this update, Google Maps was still detouring drivers.

UPDATE AUG. 16: While a segment of Interstate 11 opened near Railroad Pass Wednesday, GPS apps have not picked up on the new route.

Google Maps and Apple Maps both show the area south of Henderson as closed, detouring drivers onto Lake Mead Parkway and through Lake Mead before coming out just outside Boulder City. Since drivers have been told to go through Lake Mead National Recreation Area, they are also subject to the Lake Mead entry fee.

The Nevada Department of Transportation is aware of the issue and is working to fix it. NDOT recommends drivers use the Waze app. In addition, notices are being posted on digital messaging signs to inform drivers.

The most expensive toll I've ever paid ? plus, a super long wait. @KTNV https://t.co/Y19Jcg8lat

?GPS apps show US93/95 closed at Railroad Pass. The road is open. You do not need to detour through @lakemeadnps , but you're always welcome.

GPS apps are not registering the new I-11 interchange & redirecting people through @lakemeadnps but 95/93 is not closed! pic.twitter.com/voS1LVMsoR

We are working to resolve this issue. Meanwhile, FAST will be posting notices along its digital messaging boards. We recommend using @waze

HENDERSON (KTNV) -- The Nevada Department of Transportation will open the newly constructed 2.5-mile-long section of southbound Interstate 11 between the U.S. Highway 95 interchange and Railroad Pass Casino interchange at 5 a.m., August 16.

The lane opening will impact access at the Railroad Pass Casino, with southbound ingress using the U.S. Highway 93 / 95 interchange to Searchlight for access. Exiting casino traffic, meanwhile, will have to make a U-turn at Wagonwheel Drive to head back toward Boulder City.

The project is part of the $83 million first phase of Interstate 11, which calls for building a four-lane concrete interstate freeway between Silverline Road and Foothill Drive with a full diamond interchange at Railroad Pass with a loop ramp.

Fisher Sand & Gravel Co. is the general contractor. The project will be helpful for drivers heading between Nevada and Arizona, cutting down drive time by about 30 minutes, but work still needs to be done.

The segment is still scheduled to finish in 2018.