Investigators say the woman went to retrieve some of her belongings from her ex-boyfriend's house before she was attacked. The ex-boyfriend was identified as 35-year-old Ronny Withers. Mahsa Saeidi reports.

UPDATE JULY 4: Six months after the brutal attack, Sondera Lucero has an urgent warning to others in the same situation.

"If someone hits you once, they're going to do it again," she said.

Lucero's ex-boyfriend, Ronny Withers, is currently awaiting trial. He is scheduled to be back in court July 17.

"I feel like I have purpose," she said. "I'm not being brought down on a daily basis."

The young woman says she endured years of mental and physical abuse before deciding to leave. That is when the attack occurred.

Only on @KTNV she was beaten/left for dead. Tonight the urgent advice for others who have endured domestic violence pic.twitter.com/uFhek3FEKw

The survivor turned advocate says she knows all of the reasons people stay in harmful relationships.

"I'm not going to have anywhere to go," she said. "...I'm going to feel bad because this person needs me."

In this case, Lucero said the suspect would also threaten her family.

Here's is the link from @LVMPD for victims of domestic violence: https://t.co/aJU04Gn7LK

She is sharing her recovery so others can she how she overcame the horrific experience.

UPDATE JAN 27: The man wanted for the attempted murder of his ex-girlfriend in North Las Vegas has been arrested.

35-year-old Ronny Withers was arrested in Taylorsville, Utah. Law enforcement agencies in California, Nevada and Utah had been alerted that he might be headed to their areas.

According to Good4Utah.com, police officers spotted him in Millcreek area. He was arrested after a pursuit and a short standoff during which police officers deployed non-lethal measures to force his surrender.

Police say that Withers had a knife on him at the time of his arrest and several self-inflicted wounds.

On Tuesday around 6:30 p.m., officers were dispatched to the 1100 block of Egret Court, near Lone Mountain Road, in reference to a domestic disturbance.
Arriving officers located a 28-year-old female suffering from multiple stab wounds. She was transported to University Medical Center in critical condition.
Investigators say the woman went to retrieve some of her belongings from her ex-boyfriend's house before she was attacked.
"The doors were locked, he wasn't even supposed to be in that house," said friend AJ Turner.
A GoFundMe has been set up for the woman attacked, who relatives identify as Sondra Lucero.

"He tried to slash off her nose," said mom Cynthia Lucero.
The 28-year-old was stabbed in her hand and torso. Her throat was slashed as well.
"It's hard to breathe," said Sondra.
The family is living in fear until the suspect, identified as 35-year-old Ronny Withers, is captured.

Withers is described as a white male, about 5'11", 190 pounds with blonde hair and blue eyes.

He has an extensive arrest history and violent tendencies. He is wanted for questioning in this incident.
Withers is considered armed and dangerous and should not be contacted if seen. 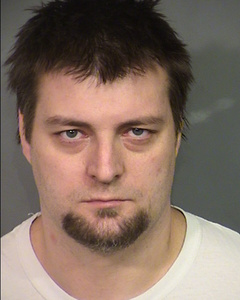 Turner said he was pepper sprayed by the suspect.

"I just don't want this to happen to anyone else, I want him caught," said Turner.
Anyone with information on the whereabouts of Withers is asked to call the North Las Vegas Police Department at 702-633-9111 or, to remain anonymous call Crime Stoppers at 702-385-5555.
Copyright 2016 Scripps Media, Inc. All rights reserved. This material may not be published, broadcast, rewritten, or redistributed.