This is a roundup of all the breaking news from around the Las Vegas valley for November 5, 2018.

Nevada Highway Patrol is investigating a critical injury crash involving a car and a motorcycle at U.S. 95 and College Drive in Henderson. One person was transported to the hospital in critical condition. The ramp is temporarily closed while the crash is being investigated.

Power has been restored to the majority of the nearly 2,400 customers who lost power in southwest Las Vegas.

2,383 customers are without power in southwest Las Vegas. NV Energy says it is due to damaged equipment with the outage starting around 2:40 p.m. with expected restoration around 5:30 p.m. A 13 Action News viewer shared a photo of a crash near Durango Drive and Warm Springs Road. 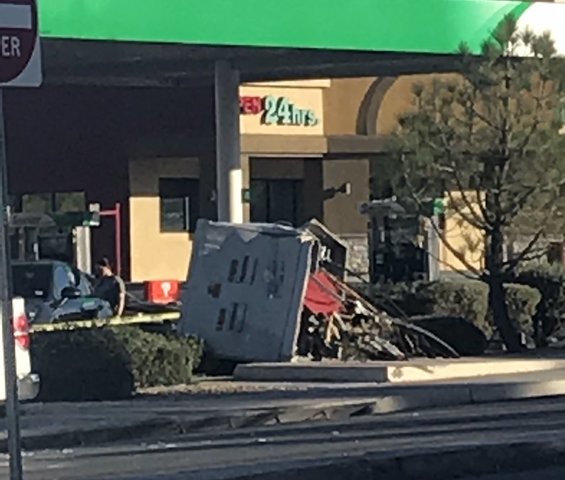 Nevada Highway Patrol reports the earlier crash on U.S. 95 happened around 8:22 a.m. when a silver Honda was getting onto the freeway and proceeded to dart across traffic toward the fast lane. The Honda was broadsided by a black Buick. The male Honda driver died of his injuries while the female Buick driver was transported to UMC Trauma with non-life-threatening injuries.

The fire on Washington Avenue was started by a plumber using a torch to fix an outside water pipe. $50K in damage, one person displaced.

Two cats died after a fire in the 6300 block of West Washington Avenue, near Torrey Pines Drive. The fire was reported in the kitchen and second floor bathroom. The cause is unknown.

All lanes have reopened on U.S. 95 after an earlier deadly crash.

The scene of the suspicious package near Decatur and Oakey boulevards has been cleared.

All southbound traffic on U.S. 95 near Lake Mead Boulevard is restricted to one travel lane after a deadly crash.

Police are investigating a suspicious package at the post office near Decatur and Oakey boulevards. The immediate area has been evacuated. Avoid the area if possible.

Police say a tourist was stabbed by a stranger while playing slots at the Golden Nugget in downtown Las Vegas. READ MORE.