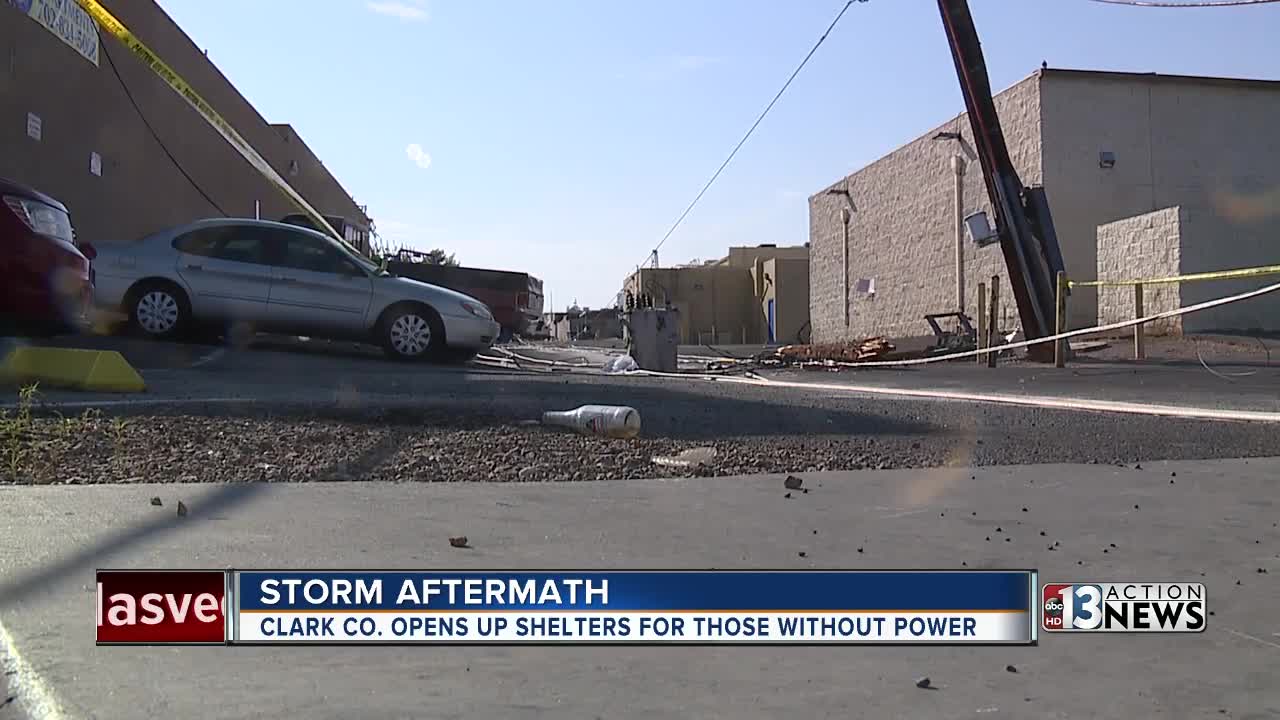 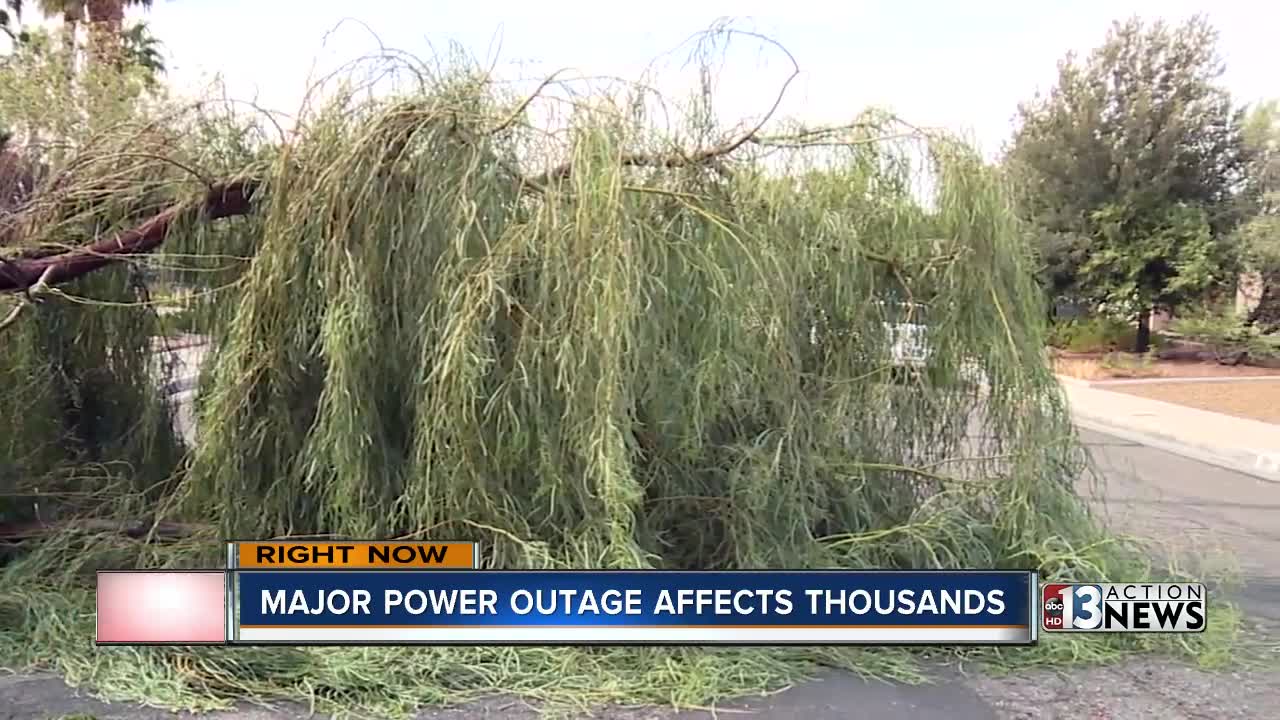 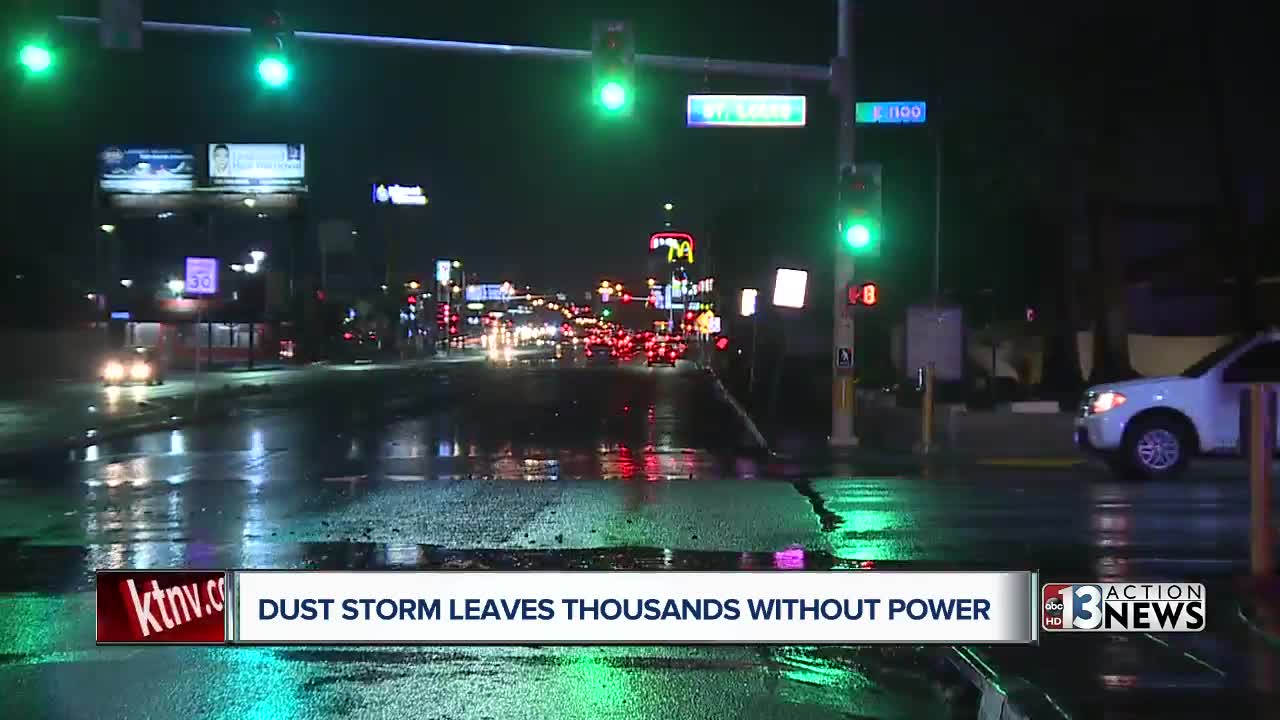 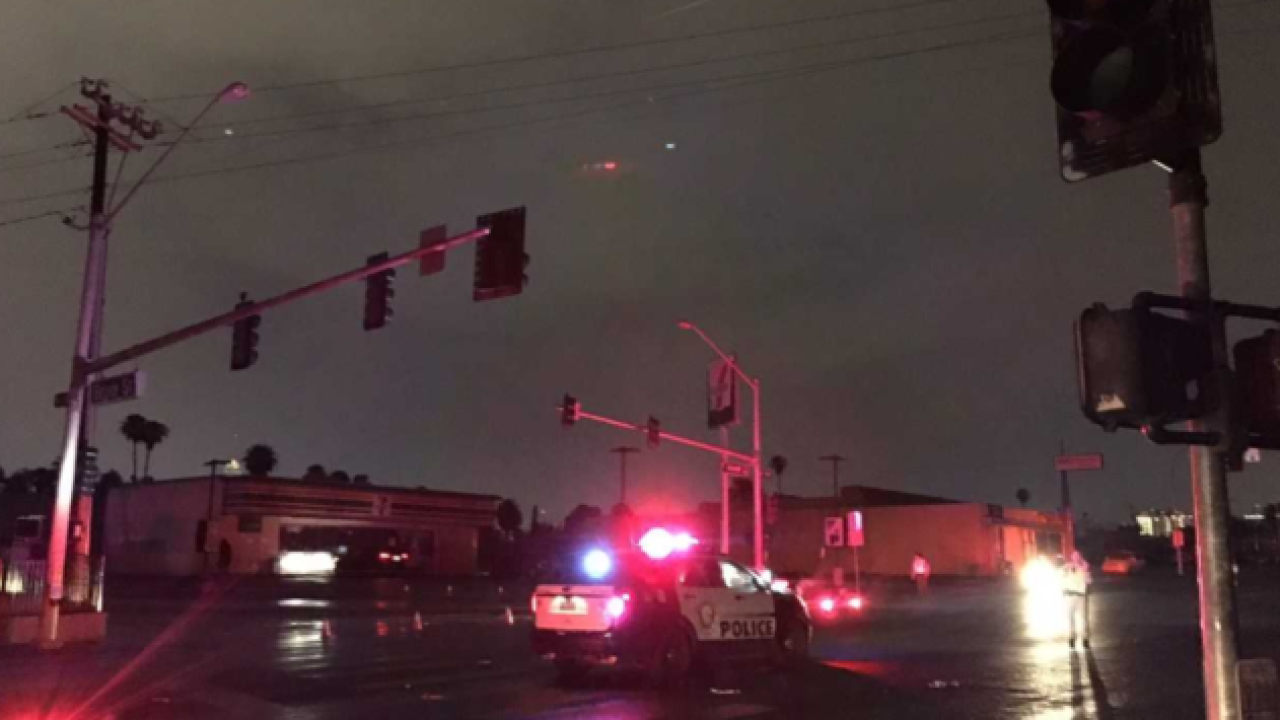 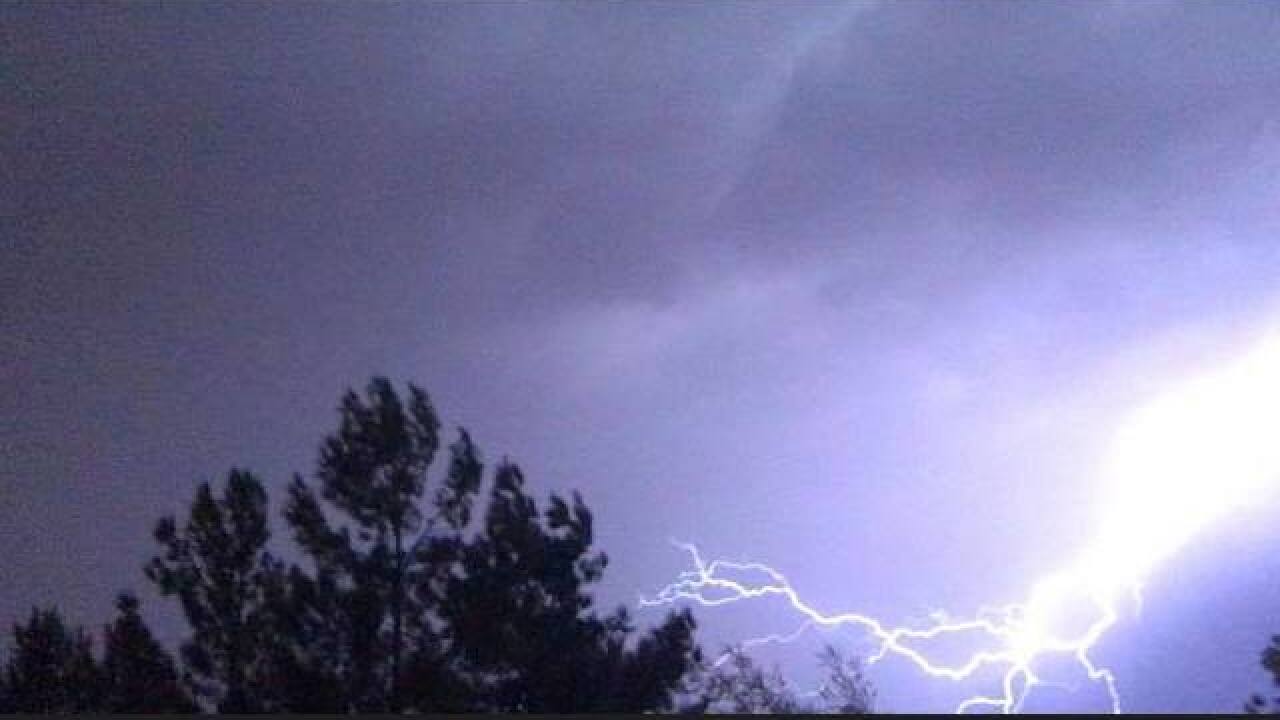 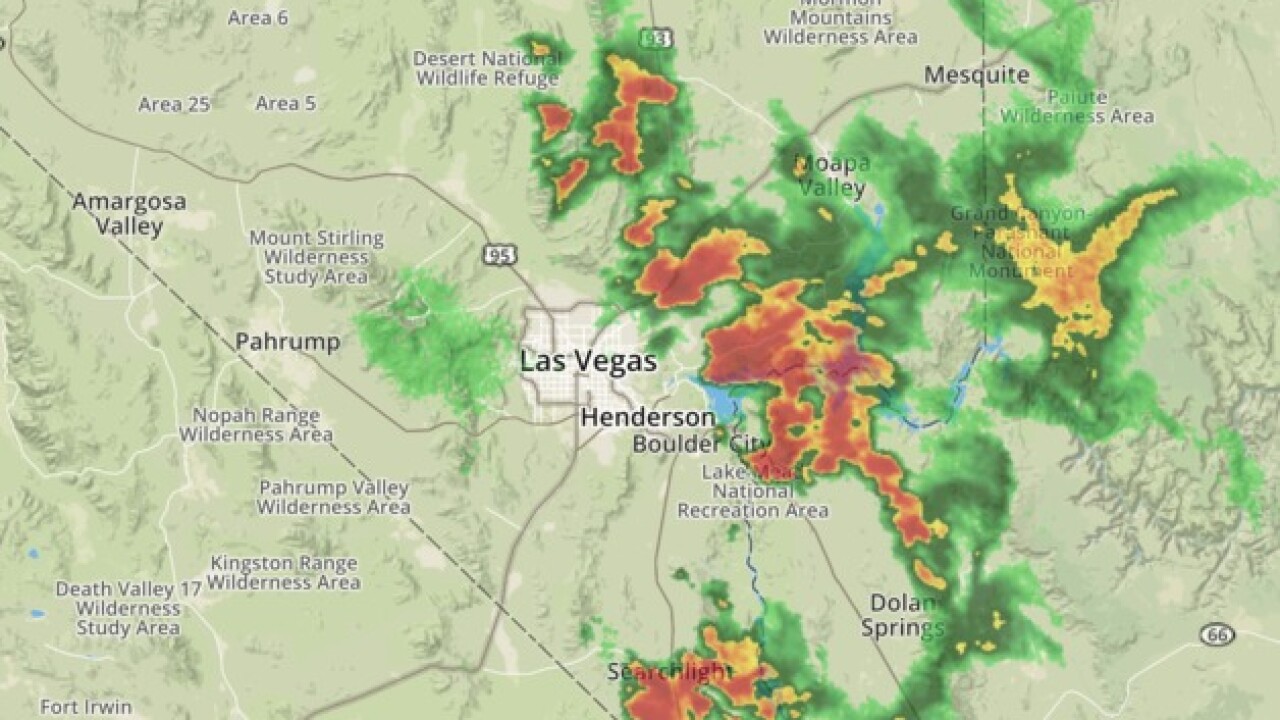 UPDATE 4 P.M. AUG. 13: Clark County is closing the Cambridge Center shelter at 5 p.m. The last person in the shelter has left after his power was restored.

Fewer than 700 customers remain without power.

UPDATE AT 2:45 P.M. Approximately 9,000 customers are still without power. Two of the four emergency shelters that were opened for residents will remain open overnight. The Cambridge and Pearson centers will remain open. You can bring your pets with you at the Cambridge shelter.

The American Red Cross volunteers are helping families who are looking for a more comfortable place to sleep tonight following a massive power outage.

Christine Kramer with the Red Cross reminds people who are seeking shelter, "Do bring your medications. Bring pillows if that makes you more comfortable to sleep. Don't bring a lot of things because you are going to be in a shelter."

There's still damage across the valley from those strong storms. As shelters were opening up, NV Energy crews were hard at work to restore power.

Crews were still at the scene of a power pole that snapped near Bruce & Fremont that cut power to area businesses and neighborhoods.

A nearby 7-Eleven convenience store was closed for the day as a result, and employees were trying to save what they could.

“Right now we have to throw out so much, a lot of frozen food, it's just a disaster," says one employee.

In a neighborhood near Charleston and Nellis, a tree fell into the middle of the road and missed hitting a house.

“I could hear it like the whole house was shaking," says Penny Neff. "I’m just glad it didn’t fall towards the house and no one was hurt”

NV Energy says it could take up to 48 hours for all power to be restored and for cleanups to be finished.

UPDATE AT 12:15 P.M. NV Energy said during a press briefing that it expects to have the power restore to the majority of their customers today. However, there could be some customers who don't have power for as long as another 48 hours. Currently, there are about 9,500 customers without power.

NV Energy also said that this is the biggest power outage they have ever experienced and their crews are working around the clock.

UPDATE AT 11:30 A.M. In the wake of last night’s storm, many residents are without power for the time being. Therefore, Clark County is opening four shelters:

The Clark County Office of Emergency Management is evaluating whether there will be a need for overnight shelters.

Pets are accepted at the shelters if they are in a carrier. There will also be a mobile pet shelter at Cambridge for pets without carriers.

There are currently 10,234 customers without power in the Las Vegas valley.

UPDATE AT 9:30 A.M. NV Energy says it has 11 crews working on the outages and are bringing in extra crews from Rocky Mountain Power (their sister company) as well as crews from northern Nevada.

The spokesperson for the company says power may not be restored by the end of the day and it may be a while for some customers.

The company is planning to give more information around 11:30 a.m. or noon.

There are currently 13,546 customers without power.

UPDATE AT 9 A.M. Power has been restored to more than half of the customers who lost power during a powerful storm on Sunday night. There are now approximately 22,000 customers without power.

UPDATE AT 5 A.M. AUG. 12: There are 175 outages and almost 35,000 customers without power on Sunday morning after the monsoon storm on Saturday night. NV Energy is not providing an estimated time of restoration for any of the outages.

13 Action News is receiving reports of damage from the storm from around the valley. NV Energy is reporting more than 62,000 customers are currently without power. Click here for information on current outages.

The storm also forced the Las Vegas 51s to suspend their game at Cashman Field.

In addition, a fire near Maryland Parkway and St. Louis Avenue may have been caused by a lightning strike.

Tonight's high winds have caused multiple outages throughout southern Nevada. We are working to restore power as quickly and safely as possible. We apologize for the inconvenience. If see a downed power line, please stay away and call 911.

Power poles down near Bruce and Fremont St. pic.twitter.com/zaGHuh7uKh

On our way to power poles down Bruce and 17th street. Rain coming down near I-15 and Russell @KTNV pic.twitter.com/UHKBMYwur9

Rain pouring down, along with lightning and thunder. Exciting 😍haven't had rain for a long time! More or less always skips this area #thunderstorm #LasVegas @FOX5Vegas @News3LV @KTNV pic.twitter.com/ykE5PL1Ya3

🌬️⚠️ DUST STORM WARNING ⚠️🌬️
8:52pm
Issued for the #LasVegas Valley! Seek shelter!! If visibility makes driving hard, pull off of the road, turn your car off and TURN OFF YOUR LIGHTS. This ensures other drivers do not think you are moving and hit you. #NvWx #VegasWeather pic.twitter.com/0GITInsix7

🌬️⚠️ DUST STORM WARNING ⚠️🌬️
8:52pm
Issued for the #LasVegas Valley! Seek shelter!! If visibility makes driving hard, pull off of the road, turn your car off and TURN OFF YOUR LIGHTS. This ensures other drivers do not think you are moving and hit you. #NvWx #VegasWeather pic.twitter.com/0GITInsix7