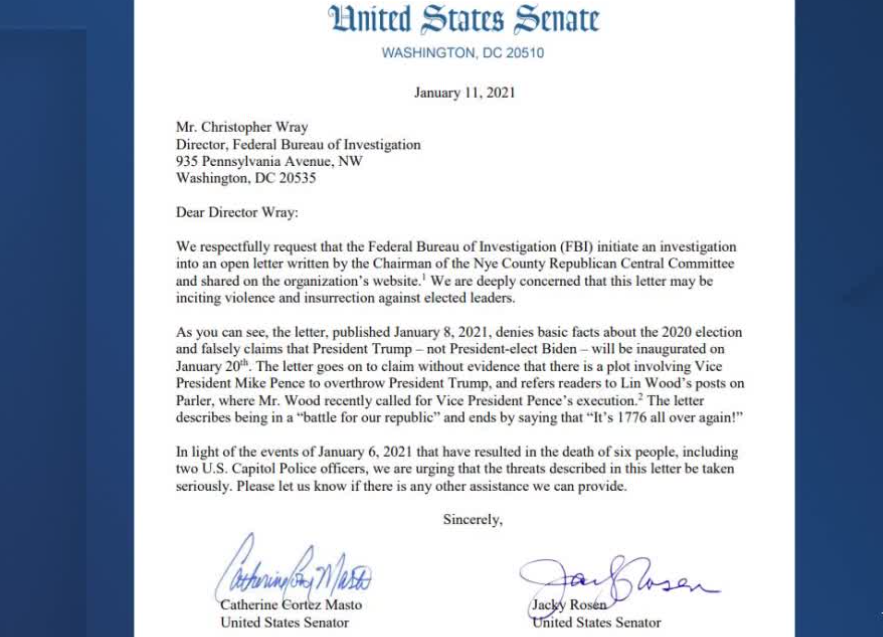 Calls from Senators Cortez Masto and Rosen for the FBI to investigate a letter posted to the Nye County GOP's website.

LAS VEGAS (KTNV) — Both of Nevada's U.S. Senators, Catherine Cortez Masto and Jacky Rosen, have sent a letter to the Federal Bureau of Investigation requesting an investigation into a letter written and shared by the Chairman of the Nye County Republican Central Committee Chris Zimmerman.

Both Cortez Masto and Rosen show concern that the rhetoric expressed in Zimmerman’s letter may incite violence and insurrection against elected officials.

“As you can see, the letter, published January 8, 2021, denies basic facts about the 2020 election and falsely claims that President Trump – not President-elect Biden – will be inaugurated on January 20th,” the Senators wrote. “The letter goes on to claim without evidence that there is a plot involving Vice President Mike Pence to overthrow President Trump, and refers readers to Lin Wood’s posts on Parler, where Mr. Wood recently called for Vice President Pence’s execution. The letter describes being in a ‘battle for our republic’ and ends by saying that ‘It’s 1776 all over again!’”

Nye County District Attorney Chris Arabia had this to say about the letter, "In my opinion, it doesn’t incite the reader to engage in unlawful violence and as such, it falls under the protection of the First Amendment.”

The Senators ended their letter with, “In light of the events of January 6, 2021 that have resulted in the death of six people, including two U.S. Capitol Police officers, we are urging that the threats described in this letter be taken seriously.”

The full letter from the senators can be read here.