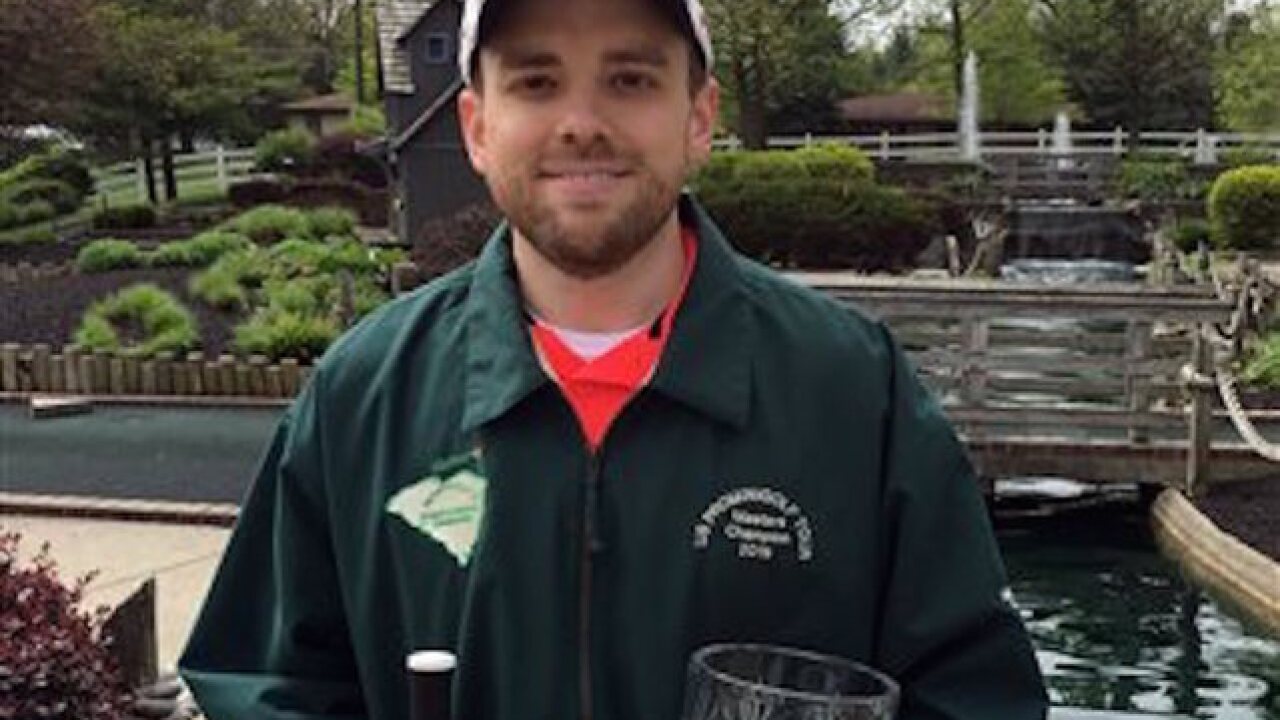 Mitch Stacy
<p>In this photo taken May 3, 2016, Matt Male poses in Westerville, Ohio, with the green windbreaker and crystal vase he won by placing first in the professional putting's version of the Masters tournament. (AP Photo/Mitch Stacy</p>

COLUMBUS, Ohio (AP) — Professional miniature golf player Matt Male has already heard all the wisecracks about the windmills, pirate ships and waterfall hazards. So just save it.

Male knows the drollery comes with the territory, though, and he's a pretty good sport about it. Earning esteem — and money — as an elite player in a sport many people don't regard as a real sport isn't an easy thing.

"I guarantee that when they join us for a round, they will respect the skill involved in being able to do it consistently," the 31-year-old Male says of the haters.

Male is bright on the sport's radar at the moment as the reigning champion of pro putting's Master's, a prestigious championship played every October on a North Myrtle Beach, South Carolina, course with a 35-foot volcano in the center that shoots flames 10 feet into the air. (The miniature golf version has been designated the Master's — apostrophe S — to keep from running afoul of the folks who stage the venerable Masters golf tournament.)

That triumph came with $4,000 cash, an embossed crystal vase and a green wind breaker that is every bit as coveted by mini-golf pros as that green sport coat at Augusta.

"It was exhilarating," says Male, who works as a copy editor for a bank in Columbus. "I knew I had the game to do it if everything went right."

Coming off that win, Male was one of four U.S. players selected to travel to Pristina, Kosovo, in June for a tournament against the best putters in the world. That field likely will include Olivia Prokopova, who at the age of 21 is a bona fide celebrity in her native Czech Republic because of her prowess on the green carpet. Prokopova, who won the Master's in 2012 and 2013, is known for traveling with a large boisterous entourage that includes her parents, a coach and a massage therapist.

"I don't think any us at this level think of it as a hobby — we take it really seriously as a professional sport," says Brad Lebo, a 55-year-old Shippensburg, Pennsylvania, dentist who's earned about $145,000 putting professionally since 1991. "We like to think we're the best at what we're doing in the world. Unfortunately, we're just in kind of a niche."

Miniature golf has been around in the U.S. for about 100 years, and has been played professionally since the 1950s. For the pros, being prepared is every bit as important as being good. Most elite players travel to a tournament site and play the course all day, every day for a week or more, charting all the breaks and caroms on a notepad, trying to account for all possibilities and determine if it's better to go in through the "front door" (directly at the hole) or "back door" (a carom off the rail behind the hole).

Lebo went to suburban Allentown, Pennsylvania, this week to begin practicing on two courses at a venue called Putt U where the next major tournament, the U.S. Open, will happen May 14. In keeping with the sportsmanship that is traditional among pro putters, Lebo shared his early intel with Prokopova, who also had arrived to start studying the courses.

"It's half billiards and half putting," says Brian Katrek, a Sirius XM PGA Tour Radio channel personality who has become a miniature golf aficionado. "It's a special skill. There's a lot of geometry involved. Jordan Spieth can hit the ball where he aims it, but in miniature golf you have to learn where to aim it."

Male, soft-spoken and cerebral, started playing competitively as a teenager after seeing a Putt-Putt tournament on ESPN. He joined the pro ranks in 2014 and won his first "major" by emerging from a field of 48 and setting a course record through the 12 rounds of the Master's last fall, beating back a run by longtime pro Matt McCaslin to win by a single stroke.

"You could cut the tension with a knife," says Bob Detwiler, founder of the U.S. Pro Mini Golf Association and owner of the Hawaiian Rumble course that has hosted the Master's for the past 20 years. "It was something to watch."

Male, one of the few pros who use the long "broomstick" style putter, will have a target on his back next week at the U.S. Open. He tied for 13th in the event last year, which was won by Lebo for the third time.

"I don't care what you're doing in life," Lebo says, "it's hard to get to the pinnacle."