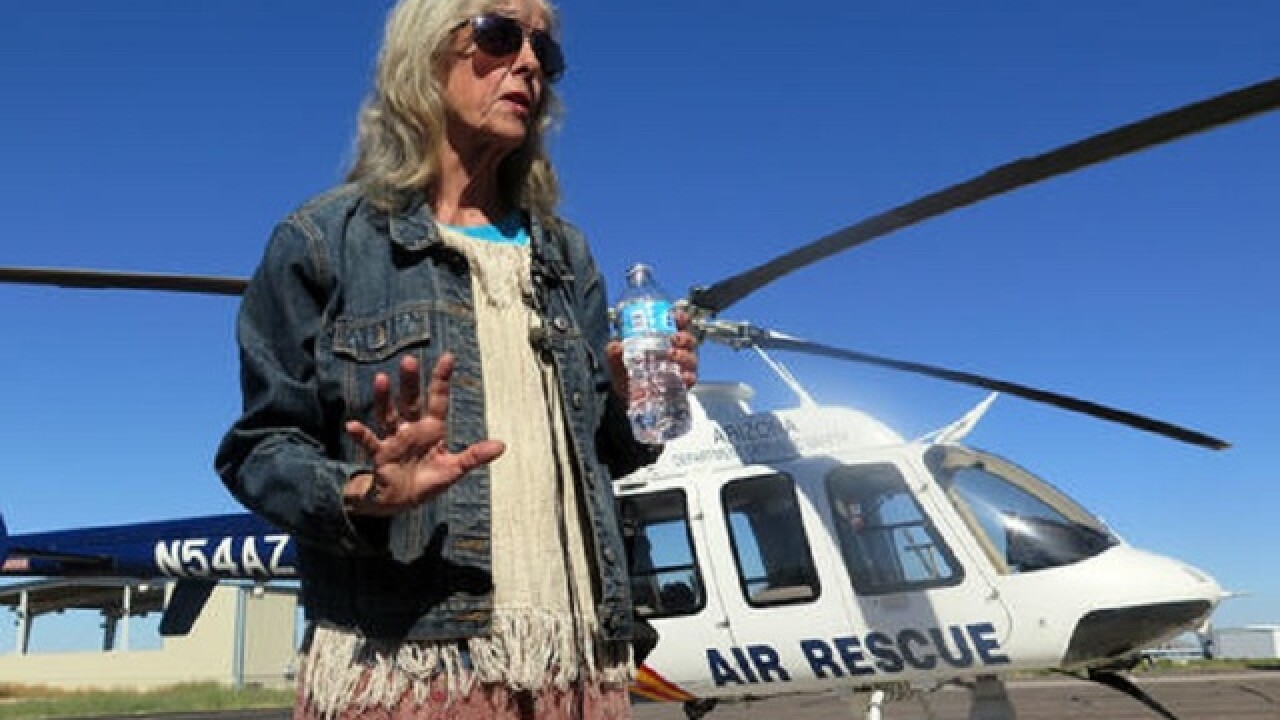 Astrid Galvan
<p>Ann Rodgers recalls being lost in the eastern Arizona mountains for nine days before being rescued, while at the Arizona Department of Public Safety hangar in Tucson International Airport, Wednesday, April 13, 2016. Rodgers, of Tucson, Ariz., was headed to Phoenix and got lost near the White Mountains east of the Phoenix area. Her hybrid car ran out of gas and electric power, leaving her stranded in the middle of nowhere. Rodgers was rescued on April 9. (AP Photo/Astrid Galvan)</p>

TUCSON, Ariz. (AP) — Ann Rodgers ate plants and a turtle and made a "help" sign large enough that a helicopter was able to find her after nine days in the Arizona wilderness.
The 72-year-old Tucson woman, who was found in the White Mountains in eastern Arizona, says studying survival methods and taking a survival course saved her life.
"We kept trekking as long as I could go each day but as soon as that sun started to drop below those high walls, I had to stop, get my campsite ready, make my campfire, bring in my wood to keep it going all night," she said during a news conference Wednesday.
But an expert says she broke the most important rule for being found: Stay with your car. Rodgers' car was found days before her rescue, while she walked through the forest. She also hadn't told her family she was headed to visit them and was never reported missing.
Cody Lundin, a survival instructor in Arizona who co-hosted Discovery Channel's "Dual Survival" series, says one of the first rules those courses teach is to never leave a car because it's more visible than a person. Another is to let people know where you're headed and when.
"Clearly she did whatever she had to do to stay alive. But she didn't need to do what she did. This ordeal didn't need to last for nine days," Lundin said.
Rodgers went missing on March 31 on her way to visit her grandchildren in Phoenix, which is a straight shot from Tucson on Interstate 10. She struggled to explain how she became lost but said she took two wrong turns and ended up on a dirt road in eastern Arizona.
Her hybrid car ran out of gas and electric power and she didn't have a signal for her cellphone.
Rodgers spent the first night in her car with her cat and dog, wearing three layers of clothing to keep warm and eating snacks and drinking water she had packed.
On the second day, Rodgers and her dog walked down a road in search of a ranch that she said she had passed on her way in.
Rodgers kept looking for a sign of people, surviving off plants and pond water. She says she knew which plants were edible because she's lived in and studied the desert for a long time.
White Mountain Apache Forest rangers spotted her car on April 3 and ran a check on the license plate. They called the Gila County Sheriff's Office, which began the search.
Sheriff's Detective Johnny Holmes said Rodgers was difficult to track. He said the sheriff's office used a K-9 unit and obtained her cellphone information to no avail.
"We couldn't find anything of where this lady was," he said.
On April 4, her birthday, Rodgers was near a creek when she spotted a turtle. She grabbed it, cooked it over a fire, removed the shell and ate it.
Rodgers recalled feeling angry as the days passed and there was no sign of help.
"I was frustrated, but I knew there were people who cared enough to make sure somebody found me sometime out there," Rodgers said.
Holmes said they eventually came across what they believed could be her footprints.
On April 9, the sheriff's office gave GPS coordinates to the Department of Public Safety and asked the agency to fly over the area. The DPS helicopter pilot spotted a large "help" sign made of sticks and rocks.
"I was completely shocked. Up to that point I thought we were looking for a body," rescue helicopter pilot Lowell Neshem said. "For me it was like a Hail Mary pass touchdown. I didn't expect to find her alive."
Rodgers was able to walk to the helicopter. She spent a few hours at a hospital, and within a couple of days, Rodgers was back to hiking.
Associated Press 2016