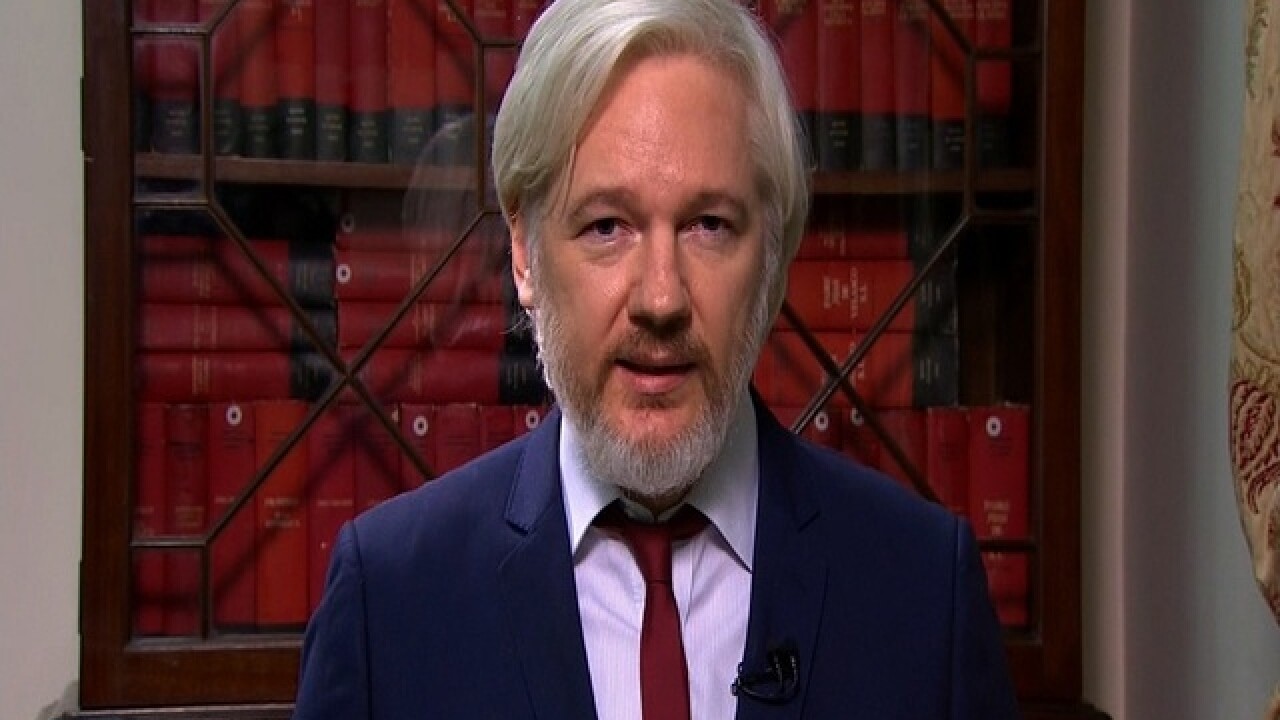 Copyright 2017 Scripps Media, Inc. All rights reserved. This material may not be published, broadcast, rewritten, or redistributed.
CNN
<p>Julian Assange has been living at the Ecuadorean Embassy in London for more than four years. He took refuge there after Swedish prosecutors issued a warrant for him in August 2010 based on allegations of sexual assault by two female WikiLeaks volunteers in the country.</p>

(CNN) -- WikiLeaks founder Julian Assange has repeated his claim that the Russian government was not the source of hacked Democratic campaign emails his organization released before the US presidential election.
The Obama administration, citing US intelligence sources, has accused Russia of orchestrating the hacking of emails from the Democratic National Committee and Hillary Clinton campaign chairman John Podesta in an attempt to influence the election's outcome.
The administration says it is "100% certain" about Russian involvement, but President-elect Donald Trump has frequently cast doubt on the veracity of the claims.
In an interview that aired Tuesday on Fox News' "Hannity," Assange was asked if WikiLeaks' source of the hacked material was "Russia or anyone associated with Russia."
"Our source is not a state party. So the answer -- for our interactions -- is no," Assange told anchor Sean Hannity from his quarters at the Ecuadorian Embassy in London, where he has lived under diplomatic protection since 2012.
Pressed on the source of the emails leaked by WikiLeaks in the weeks and months leading up to the November election, Assange repeated, "Our source is not the Russian government. It is not state parties."
He was not asked directly if he believed Russia orchestrated the hacking.
Palin: All is forgiven
Reacting to the Hannity interview, 2008 US vice presidential candidate and one-time Fox News contributor Sarah Palin, once a vociferous opponent of WikiLeaks, posted an apology to Assange on Facebook.
"This important information (the emails) that finally opened people's eyes to democrat candidates and operatives would not have been exposed were it not for Julian Assange," she wrote.
"I apologize for condemning Assange when he published my infamous (and proven noncontroversial, relatively boring) emails years ago.
"Julian, I apologize."
Trump weighed in on Twitter on Wednesday morning, saying "Julian Assange said 'a 14 year old could have hacked Podesta -- why was DNC so careless? Also said Russians did not give him the info!"
As with Palin's about-face, the President-elect's citation of the WikiLeaks founder represents a markedly different attitude toward the whistleblowing organization.
CNN's KFile uncovered a 2010 interview with Trump, in which Fox News anchor Brian Kilmeade brought up the topic of WikiLeaks. At the time, WikiLeaks had published hundreds of thousands of classified documents and videos that were leaked to the organization by Pfc Chelsea Manning, known at the time as Pfc Bradley Manning.
Speaking on camera to preview Kilmeade's radio show, Trump said: "I think it's disgraceful, I think there should be like death penalty or something," during the quick exchange.
Assange denies contact with Putin, Trump campaign
Assange also denied talking to Russian President Vladimir Putin, his surrogates or anyone associated with the Trump campaign.
He suggested that President Barack Obama was "acting like a lawyer" with the hacking allegations.
"If you look at most of his statements, he doesn't say ... WikiLeaks obtained its information from Russia, worked with Russia."
He said the content of the emails that WikiLeaks published was germane to the US election and the concerns of the electorate, and dominated much of the election cycle in the weeks leading up to November 8.
"Was (the leaked information) influential? Did it have a lot of influence? Statistically, yes. It was the No. 1 topic on Facebook throughout October. The No. 1 (political) topic on Twitter, also, throughout October.
"Did it change the outcome? Who knows. It's absolutely impossible to tell."
Assange open to publishing Trump leaks if available
Assange also told Hannity he would have "absolutely" released information about Trump and his campaign if he had received it.
He added that the White House's "dramatic response," directly accusing Russia of orchestrating the hacks, is an attempt to "delegitimize" Trump's presidency, something he believes the defeated party will continue to do.
"(The Democratic Party) will seize on this and harp on it for the next four years," he said.
The-CNN-Wire
™ & © 2017 Cable News Network, Inc., a Time Warner Company. All rights reserved.
Copyright 2017 Scripps Media, Inc. All rights reserved. This material may not be published, broadcast, rewritten, or redistributed.