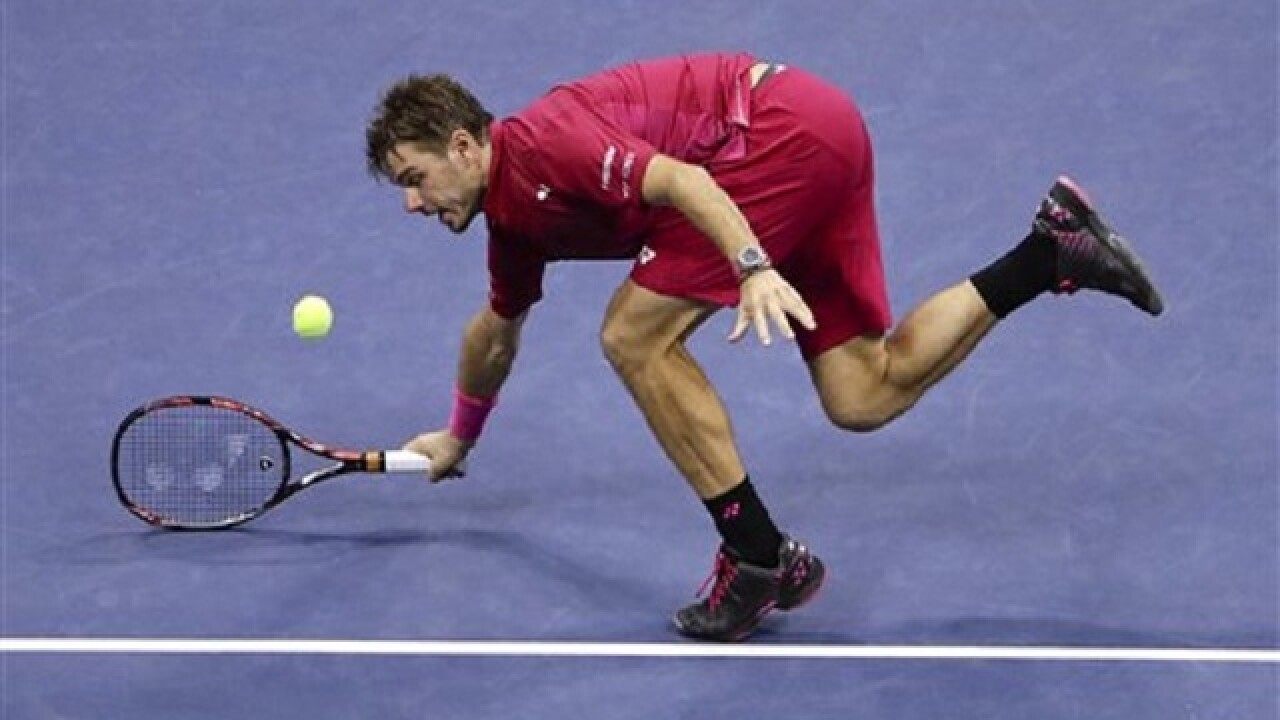 NEW YORK (AP) — Pointing to his temple after winning the biggest of points, Stan Wawrinka wore Novak Djokovic down and beat the defending champion 6-7 (1), 6-4, 7-5, 6-3 on Sunday for his first U.S. Open title and third Grand Slam trophy overall.
The 31-year-old Wawrinka is the oldest U.S. Open men's champion since Ken Rosewall was 35 in 1970. Yet he already had gained the upper hand by the time No. 1 Djokovic clutched at his upper left leg and grimaced after missing a forehand while getting broken early in the fourth set. From there, Djokovic briefly began conceding points, showing little of the fight he's so famous for.
Trailing 3-1 in the fourth set, Djokovic was granted the unusual chance to have a medical timeout at a time other than a changeover. He removed both shoes and socks so a trainer could help him out with what appeared to be blisters on toes.
Wawrinka complained to the chair umpire about the 6-minute break, and Djokovic looked over and apologized.
When they resumed, Djokovic earned three break points, but Wawrinka held for 4-1. That continued a pattern that carried throughout: Djokovic, as good a returner as there is in the game — now, certainly, and perhaps ever — managed to convert only 3 of 17 break chances.
Djokovic started limping later and received more toe treatment at the changeover before he served down 5-2 in the fourth.
Wawrinka has won only five of 24 career meetings against Djokovic, but has now beaten the 12-time major champion on the way to each of his own Grand Slam titles, including in the 2014 Australian Open quarterfinals and 2015 French Open final.
Before this matchup, Djokovic praised Wawrinka as "a big-match player," and, boy, is he ever. Wasn't always, though: Playing in the shadow of his far-more-accomplished Swiss countryman and good pal, Roger Federer, Wawrinka needed until his 35th appearance at a major, at age 28, just to get to the semifinals for the first time.
But look at Wawrinka now.
He has now won 11 tournament finals in a row.
He is 3-0 in Grand Slam finals, beating the No. 1-ranked player each time.
And he did it Sunday against Djokovic, whose French Open title in June completed a career Grand Slam and made him only the third man — and first in nearly a half-century — to win four consecutive major tournaments.
Earlier Sunday, Bethanie Mattek-Sands of the United States and Lucie Safarova of the Czech Republic won the women's doubles title for their third Grand Slam trophy as a pair. They beat the top-seeded French team of Caroline Garcia and Kristina Mladenovic 2-6, 7-6 (5), 6-4.
Mattek-Sands is the first American to win women's doubles at Flushing Meadows since 2011, when Liezel Huber and Lisa Raymond did it.
The final was played on the 15th anniversary of the 9/11 terrorist attacks, and Mattek-Sands wore knee-high socks and a left wrist band with the same red-and-white-striped, star-spangled design she did while teaming with Jack Sock to win a gold medal in mixed doubles at the Rio Olympics last month.
"To have this result here has been amazing," Mattek-Sands told the Arthur Ashe Stadium crowd during the trophy ceremony, her eyes welling with tears and her voice choking on her words. "It's a special day today here for everybody in New York."
Copyright 2016 The Associated Press. All rights reserved. This material may not be published, broadcast, rewritten or redistributed.