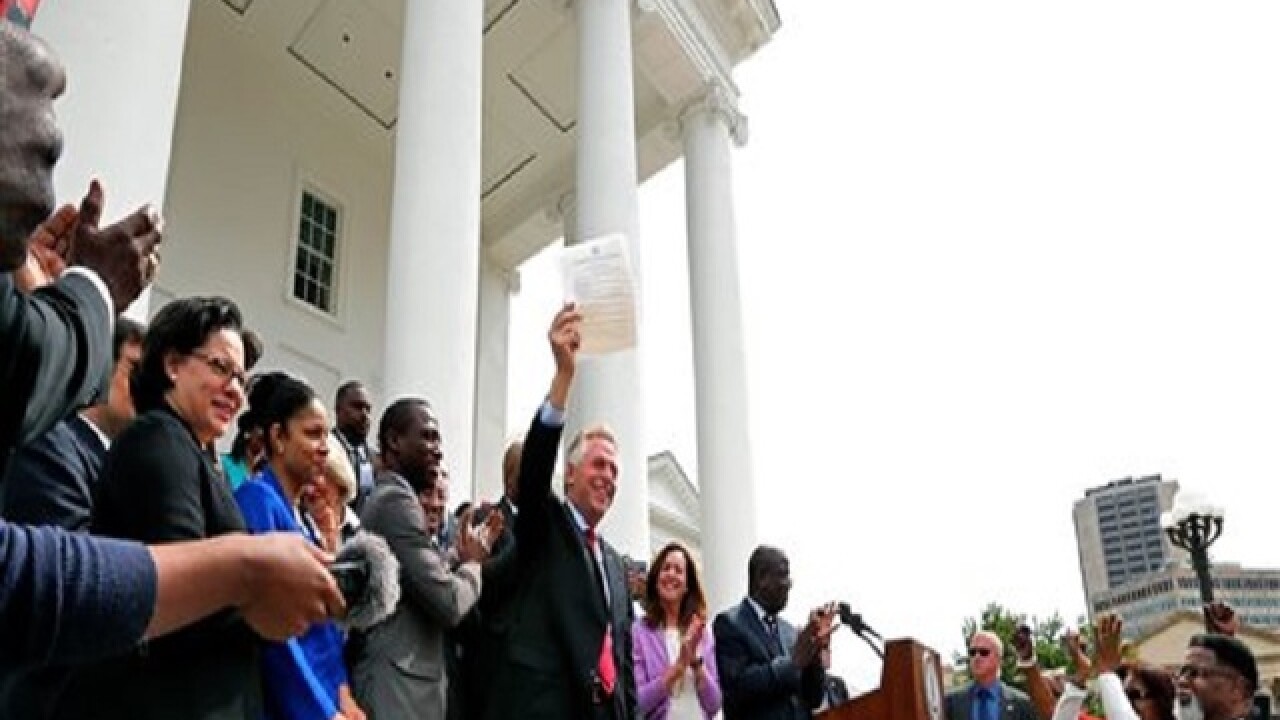 Mark Gormus
<p>Gov. Terry McAuliffe holds up the order he signed to restore rights to felons in Virginia at the Capitol in Richmond, Va., Friday, April 22, 2016. More than 200,000 convicted felons will be able to cast ballots in the swing state of Virginia in November's election under a sweeping executive order by McAuliffe announced Friday that restores their rights to vote and run for office. (Mark Gormus /Richmond Times-Dispatch via AP) MANDATORY CREDIT</p>

By: Associated Press
Posted at 9:07 PM, May 02, 2016
RICHMOND, Va. (AP) — Republican lawmakers in Virginia will file a lawsuit challenging Democratic Gov. Terry McAuliffe's decision to allow more than 200,000 convicted felons to vote in November, GOP leaders said Monday.
Republicans said that they have hired an attorney and plan to contest the governor's executive order, which restored the rights of felons to vote, run for office and sit on a jury.
GOP lawmakers argue the governor has overstepped his constitutional authority with a clear political ploy designed to help his friend and Democratic presidential candidate Hillary Clinton get votes in the important swing state of Virginia this fall.
"Gov. McAuliffe's flagrant disregard for the Constitution of Virginia and the rule of must not go unchecked," Senate Republican Leader Thomas Norment said in a statement. He said his predecessors and previous attorneys general examined this issue and concluded Virginia's governor does not have the power to issue blanket restorations.
Iowa, Kentucky and Florida remove voting rights for felons for life unless a state official restores them.
McAuliffe has said that people who have served their time should be given a second chance to exercise their civic duties. He has also said he's certain he has such authority after consulting with legal and constitutional experts, including Virginia Attorney General Mark Herring, who is also a Democrat.
The governor's spokesman didn't immediately return a message seeking comment.
The governor's order enables every Virginia felon to vote, run for public office, serve on a jury and become a notary public if they have completed their sentence and finished any supervised release, parole or probation requirements as of April 22. The administration estimates this population to include about 206,000 people.
Republicans have hired Attorney Charles J. Cooper and said they will begin examining their legal options. They didn't say when they would file the lawsuit.
Cooper worked as an assistant attorney general under President Ronald Reagan and has argued cases before the U.S. Supreme Court.
They said they will not be using taxpayer dollars to pay for the lawsuit.
Associated Press 2016