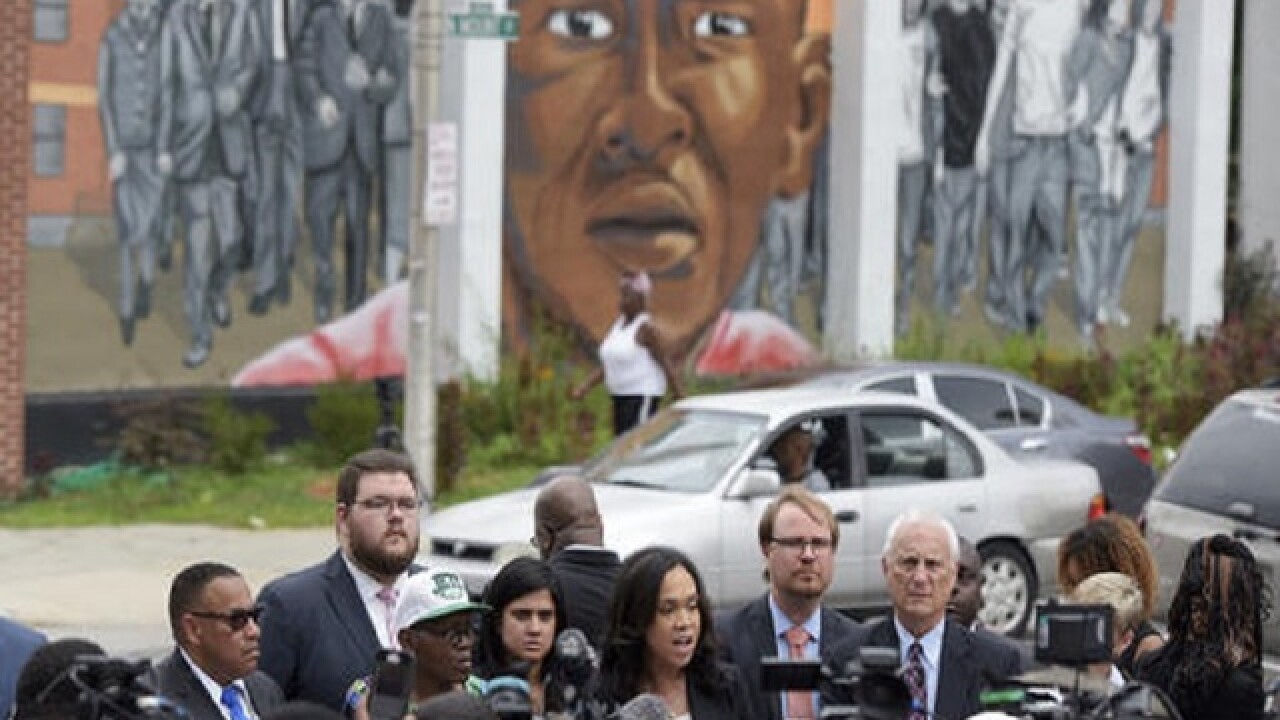 BALTIMORE (AP) — Baltimore police officers routinely discriminate against blacks, repeatedly use excessive force and are not adequately held accountable for misconduct, according to a harshly critical Justice Department report being presented Wednesday.

The report, the culmination of a yearlong investigation into one of the country's largest police forces, also found that officers make large numbers of stops — mostly in poor, black neighborhoods — with dubious justification and unlawfully arrest citizens for speech deemed disrespectful. Physical force is used unnecessarily, including against the mentally disabled, and black pedestrians and drivers are disproportionately searched during stops, the report says.

The Justice Department released a copy of the report in advance of its public announcement at an event Wednesday morning in Baltimore.

The report represents a damning indictment of how the city's police officers carry out the most fundamental of policing practices, including traffic stops and searches and responding to First Amendment expression. Beyond that, though, it could serve as a blueprint for sweeping changes: The Justice Department is seeking a court-enforceable consent decree to force the police agency to commit to improving its procedures in order to avoid a lawsuit.

The Justice Department in recent years has undertaken similar wide-reaching investigations into the police in Chicago, Cleveland, Albuquerque and Ferguson, Missouri, among other cities.

The federal investigation was launched after the April 2015 death of Freddie Gray, a 25-year-old black man whose neck was broken while he was handcuffed and shackled but left unrestrained in the back of a police van. The death set off protests and the worst riots in decades.

The report went far beyond the circumstances of Gray's death to examine a slew of potentially unconstitutional practices, including excessive force and discriminatory traffic stops, within the department.

Federal investigators spent more than a year interviewing Baltimore residents, police officers, prosecutors, public defenders and elected officials, as well as riding along with officers on duty and reviewing documents and complaints.

Among the findings: Black residents account for roughly 84 percent of stops, though they represent just 63 percent of the city's population. Likewise, African-Americans make up 95 percent of the 410 people stopped at least 10 times by officers from 2010 to 2015.

During the same time period, officers stopped 34 black residents 20 times, and seven African-Americans 30 times or more, while the report says that no individuals of any other race were stopped more than 12 times.

One man who spoke to investigators said he was stopped 30 times in less than four years. At least 15 of those stops, he said, were to check for outstanding warrants. None of the stops resulted in charges.

In addition to pat-downs, Baltimore officers perform unconstitutional public strip searches, including searches of people who aren't under arrest.

The report also says officers routinely use unreasonable and excessive force, including against juveniles and citizens who aren't dangerous or posing an immediate threat. Twenty percent of force incidents reviewed by investigators involved someone who was not being arrested for a crime or who suffered from a mental health disability. Force is often used as a retaliatory tactic in instances where officers "did not like what those individuals said."

"BPD teaches officers to use aggressive tactics," the report reads. "BPD's trainings fuel an 'us vs. them' mentality we saw some officers display toward community members, alienating the civilians they are meant to serve."

The report partially blames the department's unconstitutional practices on a "zero tolerance" policy dating back to the early 2000s, during which residents were arrested en masse for minor misdemeanor charges such as loitering.

Although the department has publicly denounced these practices after a 2010 settlement with the NAACP, which sued the department over the policing strategy, "the legacy of the zero tolerance era continues to influence officer activity and contribute to constitutional violations," the report said.

Officers also routinely stop and question individuals without cause or a legitimate suspicion that they're involved in criminal activity, the report says: No charges were filed in 26 of every 27 pedestrian stops. The directives often come from supervisors. In one instance, a supervisor told a subordinate officer to "make something up" after the officer protested an order to stop and question a group of young black men for no reason.

Unconstitutional frisks are also rampant, the report says. In one incident in 2010, a man fled from an officer patrolling a "high-crime area." The officer proceeded to fire his stun gun at the running man's back, striking him several times. When the officer was able to detain the man, he frisked him but found no weapon. The officer's report "provides no reason to believe the man was armed."

State's Attorney Marilyn Mosby, the city's top prosecutor, said she expected the report to "confirm what many in our city already know or have experienced firsthand."

"While the vast majority of Baltimore City Police officers are good officers, we also know that there are bad officers and that the department has routinely failed to oversee, train, or hold bad actors accountable," she said in a statement.

She said she was confident that the federal probe would "lead to even more reforms which is an important step in ensuring best practices for a fully functioning police-prosecutor relationship."

Six officers, three white and three black, were charged in the death of Gray. Three were acquitted, another officer's trial ended in a mistrial and the charges against the others were dropped.