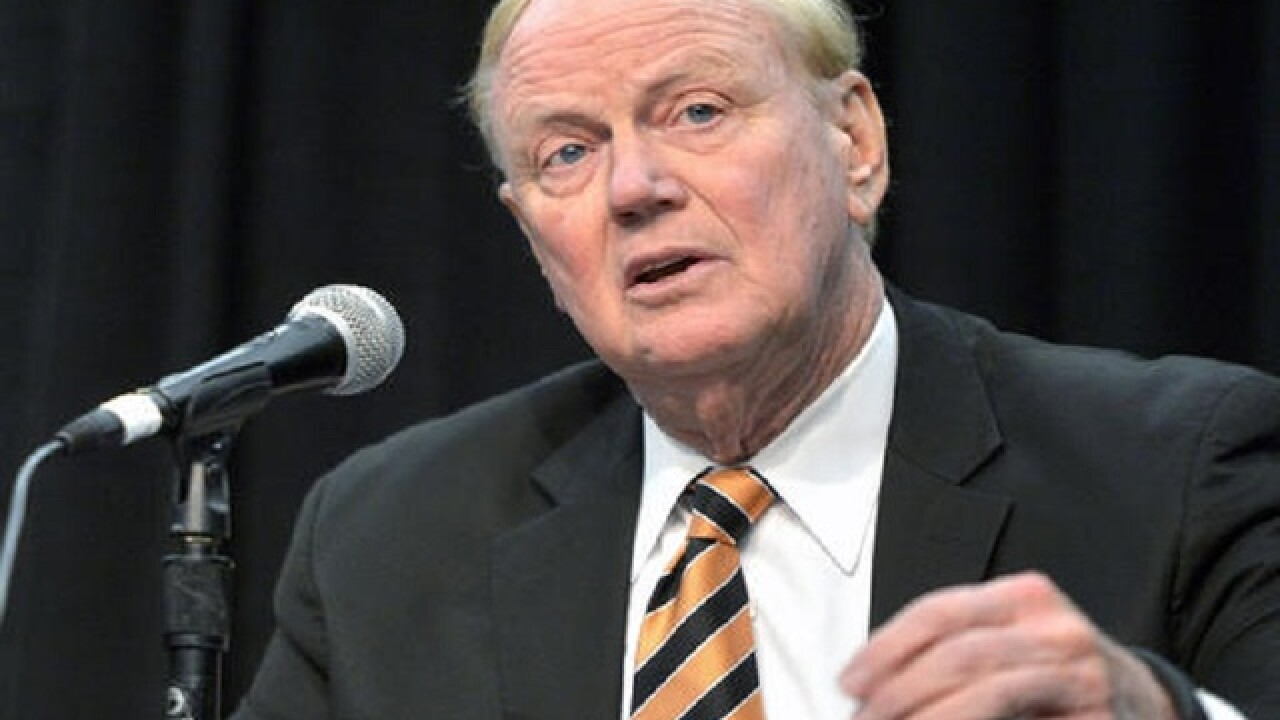 Timothy D. Easley
<p>FILE - In this Feb. 5, 2016, file photo, University of Louisville president James Ramsey addresses the media in Louisville, Ky. University of Louisville trustees have accepted the resignation of embattled President James Ramsey, whose long tenure was dogged by scandal. The action by the school's new board at a special meeting Wednesday, July 27, signals the end of an era. Ramsey has led the university for 14 years. (AP Photo/Timothy D. Easley, File)</p>

LOUISVILLE, Ky. (AP) — University of Louisville trustees accepted the resignation of embattled President James Ramsey, whose long tenure was dogged by scandal.
The action at a special meeting of the school's board signaled the end of an era. Ramsey, a former state budget director, has led the university for 14 years.
After six hours of closed-door deliberations, the board announced late Wednesday that Ramsey will be paid $690,000 and will resign immediately, with an agreement not to sue the school.
Ramsey was credited with raising academic standards and boosting the school from a commuter campus to a distinguished research institution. But he came under increasing fire for embezzlement scandals and a string of other embarrassments, including an FBI investigation of top university officials for alleged misuse of federal money and an NCAA investigation into whether a university employee paid women to strip and have sex with basketball players.
The controversies boiled over in the past two years. The Courier-Journal reported last year that the Board of Trustees challenged Ramsey's salary of more than $600,000, with millions more in deferred compensation paid by the university foundation.
Then, in October, an escort named Katina Powell released the book "Breaking Cardinal Rules" that alleged a basketball team employee hired her and other dancers to entertain players and recruits at sex parties. The NCAA launched an investigation and Ramsey announced in February that the team would not play in post-season tournaments.
Dozens of professors signed a letter to him complaining about the "drumbeat of crises" and some trustees attempted a no-confidence vote to have him ousted in the spring. Ramsey said at the time that he would not resign.
But Kentucky Gov. Matt Bevin dismantled the former Board of Trustees last month. Ramsey wrote the governor a letter offering to tender his resignation to the newly appointed board, launching a bumpy series of meetings that led to his eventual ouster late Wednesday.
The afternoon began with an agreement seemingly far more generous for Ramsey: He would collect his salary for a year as he served as interim president while the school searched for a new leader. Ramsey sat silently at Wednesday's board meeting, wearing a polo shirt, then left for his office upstairs.
But the board's closed-door negotiations stretched hours into the night. Chairman Pro Tem Ulysses "Junior" Bridgeman left several times to visit Ramsey's office, where the president was working with various advisers, he said.
The board announced just before 11 p.m. that Ramsey would be out immediately. University Provost Neville Pinto, who is on vacation, will serve as temporary leader until a new president is selected.
"In the end, it was just the decision on both sides, what everyone thought was best," Bridgeman said of the final resolution. He said it was a sad moment in the university's history despite the controversies that have colored Ramsey's tenure. He pointed to the president's accomplishments, improving graduation rates and the university's footprint in the city.
"Dr. Ramsey is always going to be a gentleman," he said about Ramsey's reaction to the final decision. "He's always going to talk about what's best for the university. And that was the discussion. It wasn't any more than that."
The board's actions will have no bearing on Ramsey's status with the University Foundation, a separate board where Ramsey is paid more than $300,000 in addition to his salary as president. Bridgeman would not speculate on what that board will choose to do about his employment.
The trustees also voted to immediately begin its search for a new president.
The decision ends weeks of unrest and confusion about Ramsey's status.
Shortly after Bevin dismantled the old board and appointed new members, Ramsey read his letter offering to resign as the board met in a private session at its first meeting earlier this month. Ramsey then left the meeting, walked directly to his office and didn't return.
His method apparently left trustees confused. Bridgeman told reporters that Ramsey had not offered his resignation. A day later, Bridgeman said Ramsey's letter had amounted to an offer to step down. Trustees met for a second time last week, reviewing budget and tuition issues but taking no action on Ramsey's status.
They scheduled a meeting to discuss his resignation for Tuesday morning, abruptly canceled it then rescheduled it for Wednesday afternoon.
Now, even with Ramsey's immediate departure, the school's leadership remains uncertain.
Democratic state Attorney General Andy Beshear is challenging Bevin's authority to disband the school's former board and appoint a new one, saying the reorganization was illegal.
During a hearing last week, Franklin Circuit Judge Phillip Shepherd said Bevin's action replacing UofL's board was "problematic" because it put the school's independence in jeopardy. His ruling is pending. If Shepherd rules against Bevin and finds the current board invalid, it's unclear whether the board's decisions will stand, including Wednesday's negotiations over Ramsey's departure.
Copyright 2016 The Associated Press. All rights reserved. This material may not be published, broadcast, rewritten or redistributed.