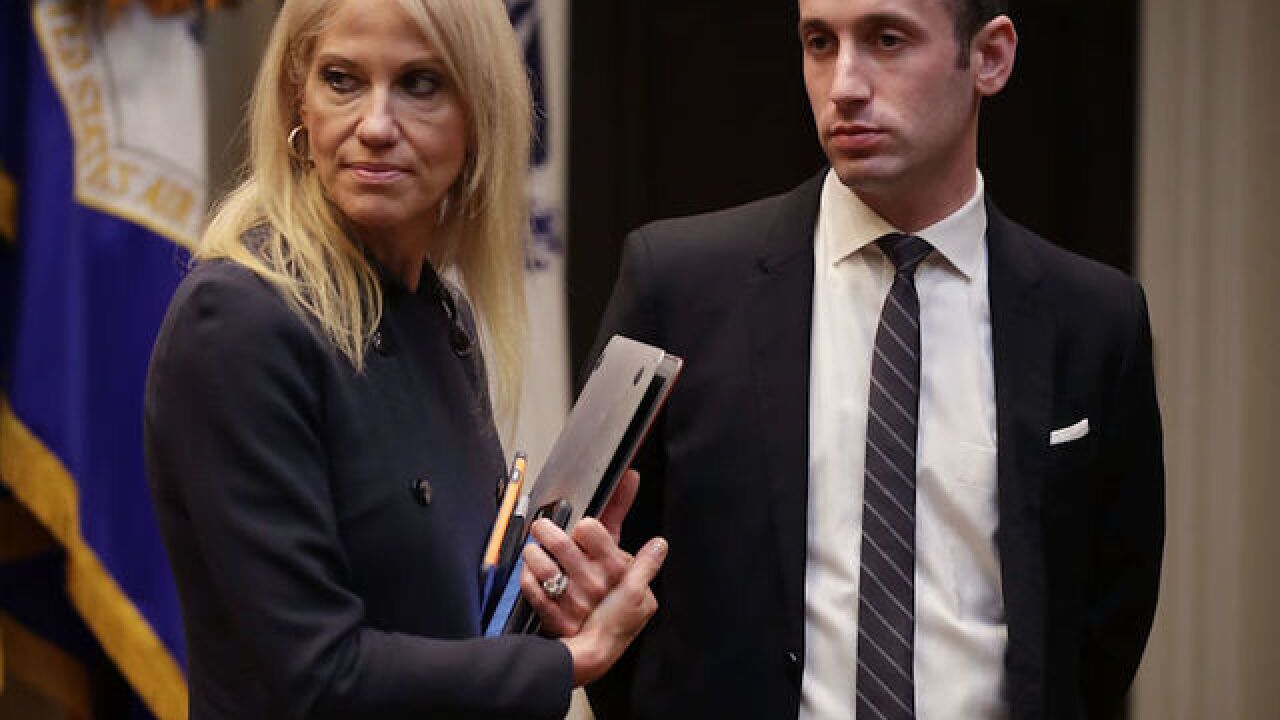 Copyright Getty Images
Chip Somodevilla
<p>WASHINGTON, DC - JANUARY 31: White House Counselor to the President Kellyanne Conway and Senior Advisor for Policy Stephen Miller wait for the arrival of U.S. President Donald Trump for a meeting on cyber security in the Roosevelt Room at the White House January 31, 2017 in Washington, DC. Citing the hack of computers at the Democratic National Committee by Russia, Trump said that the private and public sectors must do more to prevent and protect against cyber attacks. (Photo by Chip Somodevilla/Getty Images)</p>

President Donald Trump's senior policy adviser on Sunday repeated Trump's unsubstantiated claims that people were bused from Massachusetts to New Hampshire to vote illegally in the swing state during the 2016 election.

But he provided no evidence to support that claim or other claims of widespread voter fraud.

In a contentious interview with ABC's George Stephanopoulos on "This Week," White House policy director Stephen Miller repeated Trump's claim last week that he would have won New Hampshire were it not for "thousands" of people being bused there.

"Go to New Hampshire. Talk to anybody who's worked in politics there for a long time. Everybody's aware of the problem in New Hampshire," Miller said.

Stephanopoulos pressed Miller for evidence to support Trump's claim, but when none was given, said: "Just for the record, you have provided absolutely no evidence."

"George, it is a fact and you will not deny it that are massive numbers of non-citizens in this country who are registered to vote. That is a scandal! We should stop the presses and as a country we should be aghast about the fact that you have people who have no right to vote in this country registered to vote, canceling out the franchise of lawful citizens of this country," he said. "That's the story we should be talking about! And I'm prepared to go on any show, anywhere, any time, and repeat it and say the President of the United States is correct, 100%."

CNN fact-checking has found no evidence of widespread voter fraud or of 3 to 5 million illegally cast votes.

Later in the interview, while discussing Trump's plans for the country, Miller said that "the non-citizen voting issue is pervasive and widespread and we are going to protect our country from voter fraud."

Stephanopoulos ended the interview by saying: "You can start by providing evidence to back up your claims."

Trump, who lost the national popular vote to Hillary Clinton, has repeatedly claimed publicly and in private meetings with lawmakers that 3 to 5 million people voted illegally.

The White House has cited reports that show people who have died or registered to vote in multiple states remain on the rolls. But state elections officials have said even though there is a lag in updating voter rolls after people die or move, there is no evidence that fraudulent votes are actually being cast.

"As everybody knows, Stephen Miller has no evidence of voter fraud in NH. This has been debunked. @realDonaldTrump didn't call for a recount," she wrote.

Trump, though, praised Miller's performance on the Sunday news shows.

"Congratulations Stephen Miller- on representing me this morning on the various Sunday morning shows. Great job!" the President wrote.