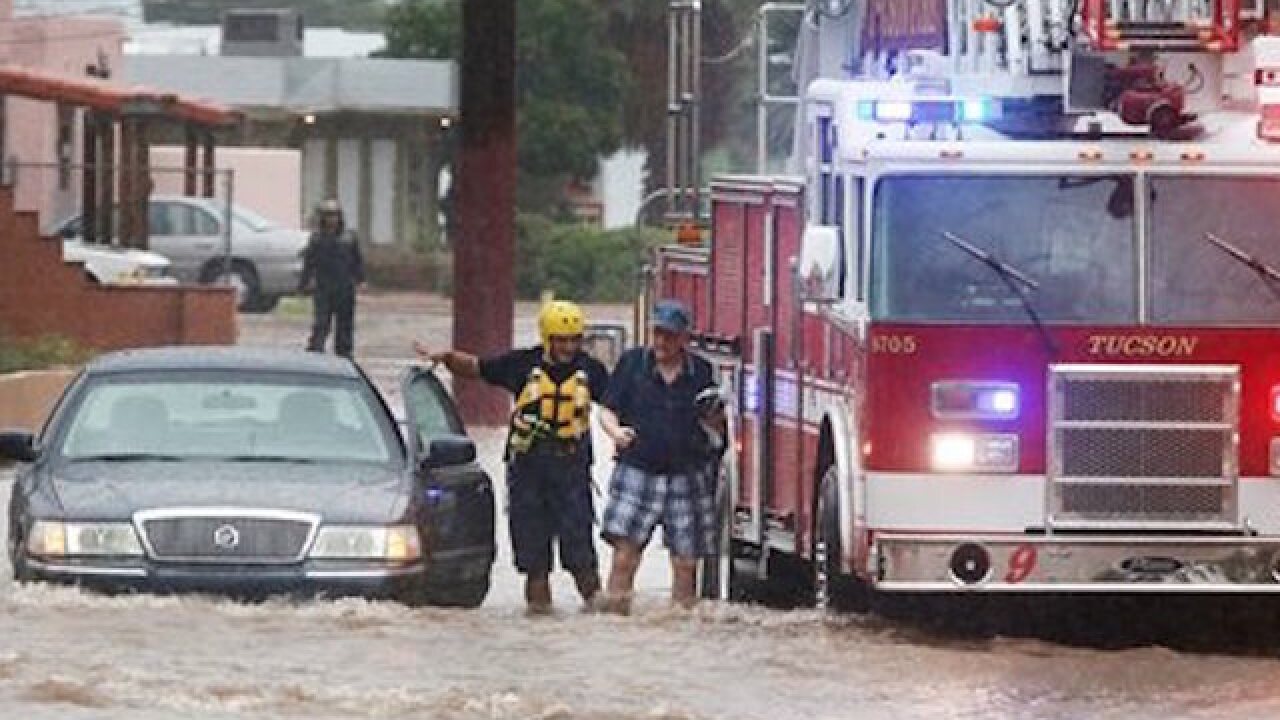 PHOENIX (AP) — The Southwest will see another round of storms on Wednesday as rains associated with Tropical Storm Javier in Mexico head north.

Heavy rain is expected for a second day in Tucson. The National Weather Service has issued a flash flood watch until Thursday.

The storm on Tuesday made streets look like rivers. Water swallowed vehicles, including that of a local leader who was rescued through the back window of her county-issued car after it became wedged against a bridge underwater. The Tucson Fire Department says it performed eight water rescues and helped about 45 stranded motorists during a two-hour period of intense rain on Tuesday.

Captain Barrett Baker says there were 75 calls for help for water-related incidents.

The storm caused heavy flooding and closed several streets. Tucson's street car, which travels around downtown and the university area, was out of service all morning because of floods. There weren't any reported injuries as a result of the floods.

In Phoenix, a dust storm engulfed parts of the metro area while the eastern suburbs got a brunt of the rain, accumulating at least 1 ½ inches by midday.

Heavy rain associated with Tropical Storm Javier in Mexico was expected to hit much of the American Southwest and bring the possibility of more flash floods. Forecasters say the new storms may remain through Thursday and could affect Arizona, New Mexico and the southern parts of Utah and Colorado.

RELATED: Storm Shield app provides life-saving weather alerts
RELATED: RadarCast can tell you when it's about to rain at your location

Meteorologist Geral Estupinan said rain would hit the area off and on all day, but that the storm was headed north. He said the storms affecting the area are associated with Tropical Storm Javier but not directly related.

New Mexico was mostly spared from heavy rains but the western part of the state was expected to be hit on Wednesday.

Mexican authorities evacuated people from low-lying areas around the resort city of Cabo San Lucas as Tropical Storm Javier blew past the tip of Mexico's Baja California Peninsula before weakening to a tropical depression Tuesday.