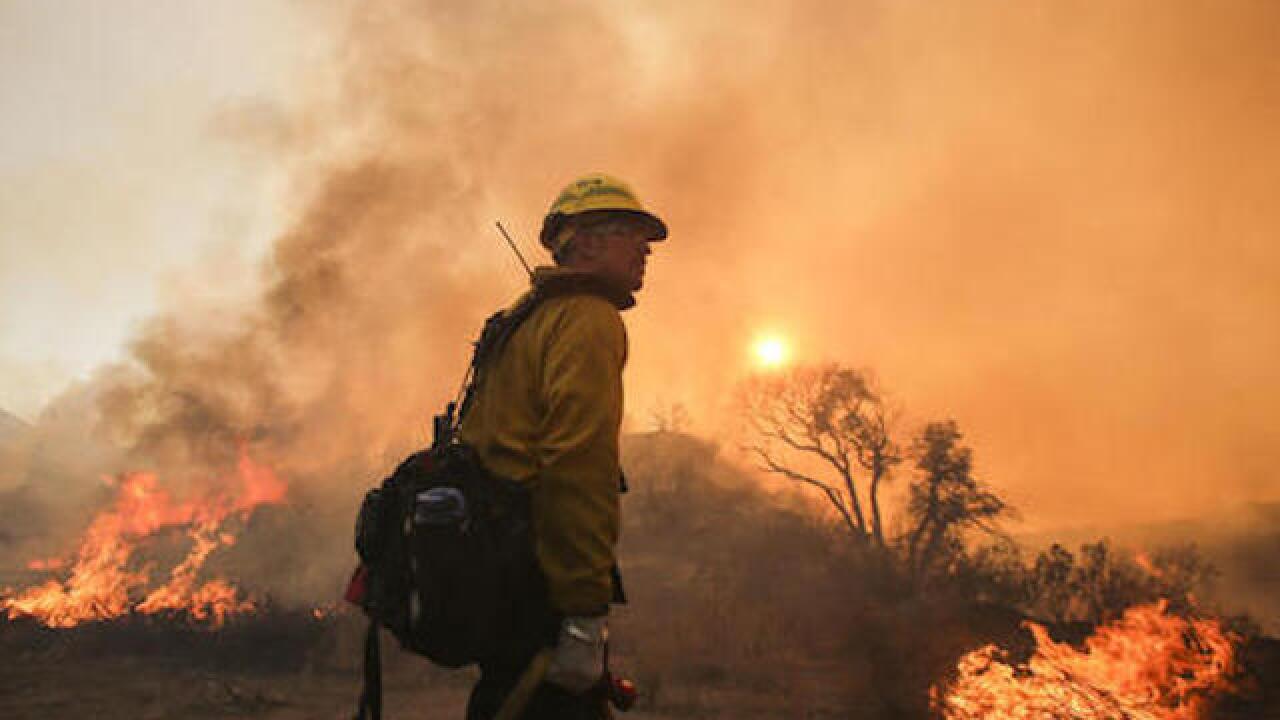 SANTA CLARITA, Calif. (AP) — An unpredictable wildfire that destroyed more than a dozen houses filled skies north of Los Angeles with smoke Monday after driving thousands from their homes.

Some evacuees were about to return home Sunday when unexpected winds stirred up the blaze that ignited two days earlier in brush withered by days of 100-degree temperatures and years of drought.

The number of firefighters on the lines surged to nearly 3,000 as flames devoured heavy vegetation in rugged mountains and canyons near the fringes of the metro area.

"All the experience we've had with fires is out the window," said Los Angeles County Deputy Fire Chief John Tripp, one of many who noted the fire's special volatility on Sunday.

More than 51 square miles were scorched and at least 18 homes destroyed since the blaze erupted Friday afternoon.

About 10,000 homes were ordered evacuated, according to the county's fire incident webpage. It came after a man's burned body was found in the fire zone this weekend, a death that was under investigation.

Juliet Kinikin said Sunday that there was panic as the sky became dark with smoke and flames moved closer to her home a day earlier in the Sand Canyon area.

"And then we just focused on what really mattered in the house," she told The Associated Press.

Lois Wash, 87, said she, her daughter and her dog evacuated, but her husband refused.

"My husband's stubborn as a mule, and he wouldn't leave," Wash told KABC-TV. "I don't know if he got out of there or not. There's no way of knowing. I think the last time I looked, it was about 100 yards from us. I don't know if our house is still standing or not. All we can do is pray."

About 300 miles up the coast, crews battled another fire spanning more than 23 square miles that destroyed six homes Sunday and forced evacuations outside the scenic Big Sur region. The fire was threatening about 1,650 mountain homes and burning mostly out of control.

Brock Bradford lives in a historic house in Palo Colorado, one of the evacuated areas, and could see the flames coming down the road as he fled.

In Southern California, planes had to be grounded for a long stretch of Sunday afternoon because of thick smoke, but they resumed drops on the blaze for a few hours before dusk.

Helicopters released retardant around the perimeter of the fire all day and into the night.

The fire destroyed film sets at Sable Ranch in Santa Clarita, which has Old West-style buildings used for movie locations. It also forced a nonprofit sanctuary for rescued exotic creatures to evacuate 340 of its more than 400 animals, including Bengal tigers and a mountain lion.