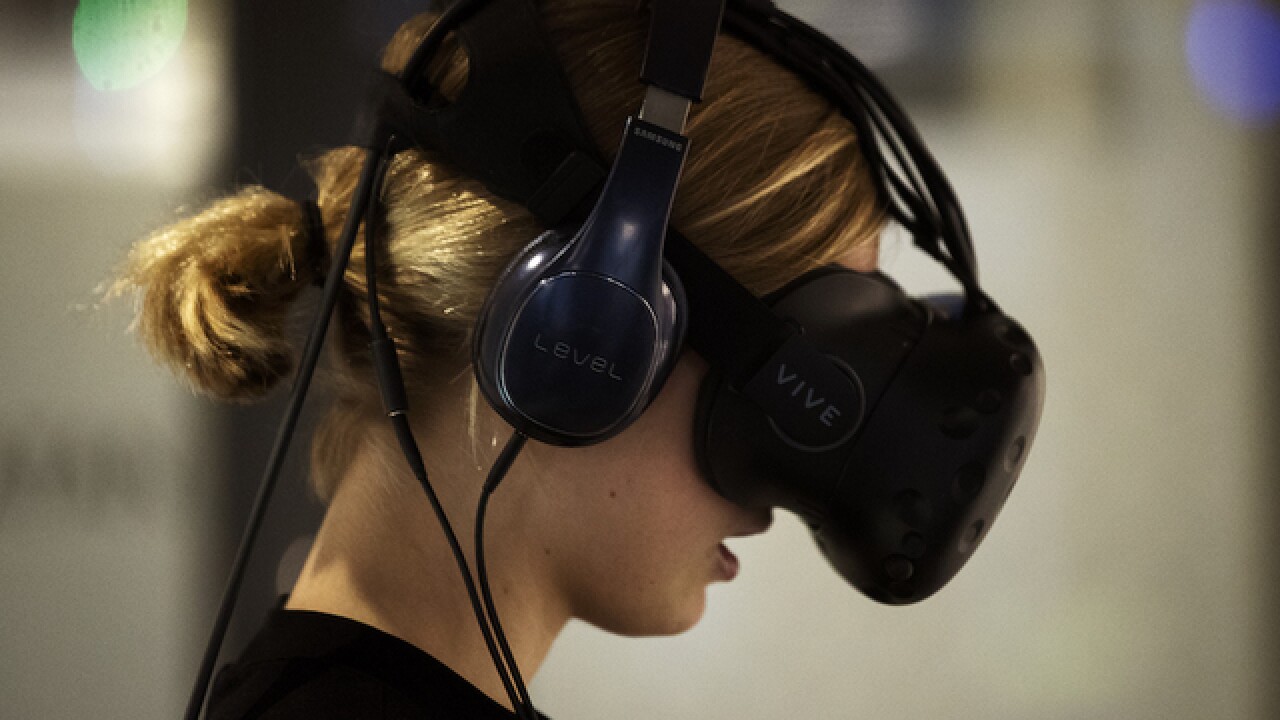 Is the magical world of virtual reality arriving in your home this holiday season?

You're not alone. Statistics show that more than a million VR headsets were shipped during the third quarter of 2017. That number is expected to rise rapidly in 2018 as more manufacturers enter the market.

But before you or your children try out your shiny new VR gadgets, be sure you're fully aware of the potential health risks of this technology.

A quick glance at the safety warnings for the major manufacturers in this space makes it clear: Playing VR without supervision and in a crowded space is risky business.

"While wearing the product's headset you are blind to the world around you," says the safety information page for HTC's Vive. "Do not rely on the product's chaperone system for protection."

"I see more falling than anything else," said Marientina Gotsis, an associate professor of research at the Interactive Media and Games Division of the University of Southern California. "You can trip and hit your head or break a limb and get seriously hurt, so someone needs to watch over you when you are using VR. That's mandatory."

That includes keeping pets, small children and other obstacles -- like ceiling fans -- out of the area. Facebook's Oculus Rift includes an infographic with the product and has an online safety center with video explanations to illustrate the safety issues.

Keep an eye on it

One of the major health concerns about virtual reality involves the eye.

"There are a variety of potential issues," said University of California, Berkeley optometry Professor Martin Banks, who studies visual perception in virtual environments. "One is how we affect the growth of the eye, which can lead to myopia or nearsightedness."

Myopia is a growing problem around the world. In the United States, studies show, nearsightedness rose from only 25% of the population in the 1970s to over 40% by 2000. About 10 million American adults are considered "severely nearsighted."

"Looking at tablets, phones and the like, there's pretty good evidence that doing near work can cause lengthening of the eye and increase risk for myopia," Banks said. "We're all worried that virtual reality might make things worse."

A good many people who use virtual reality complain of eye strain, headaches and, in some cases, nausea. Experts say that's due to the way VR affects the eye-brain connection.

In real life, our eyes naturally converge and focus on a point in space, and our brain is so used to this that it's coupled the two responses together. Virtual reality separates those, confusing the brain.

"In a virtual environment, the way we look and interact is changed because we may be projecting onto the eyes something that looks far away, but in reality, it's only a few centimeters from the eye," said Walter Greenleaf, a behavioral neuroscientist who has studied VR in medical settings for over 30 years.

Science calls that the "vergence-accommodation conflict" and isn't quite sure how serious it might be. "We're tricking the brain," said Greenleaf, who works with Stanford University's Virtual Human Interaction Lab, "and we don't know the long-term effect of this."

Most of us look at cell phones and tablets for a short time before looking up, which minimizes their negative effect on the eye. But with VR, it's all too easy to become immersed in that out-of-body experience.

RELATED: Consumer interest in wearables is picking up

How long is too long to use virtual reality in one sitting? Manufacturers like Oculus suggest a "10 to 15 minute break every 30 minutes, even if you don't think you need it." But Gotsis says that's not based on much science.

"Most of what is on the market right now has little research behind it," she says. "Cumulative exposure without us really knowing what is going on is an issue."

Gotsis says the quality of the virtual reality game also plays a role in how we react.

"A lot of content is not well-made, with a lot of flickering things and objects that come at you too fast or too close, and that can produce eye strain," she said She insists that any eyestrain be considered a signal to cease playing.

"Damage from eye strain can sometimes be very sudden, so if something is uncomfortable, just stop, take it off and stop looking at it," Gotsis warned. "Don't feel trapped and mesmerized in the content. Just stop."

It's not just the eyes that might be harmed. "Listening to sound at high volumes can cause irreparable damage to your hearing," states Oculus Rift.

"Over time, increasingly loud audio may start to sound normal but can actually be damaging your hearing," Sony's PlayStation adds, suggesting that a user lower the volume if they can't hear people speaking around them while they're playing.

Most devices also include a warning to see a doctor before use if you are "pregnant, elderly, or have pre-existing conditions that may affect your virtual reality experience such as vision abnormalities, psychiatric disorders, heart conditions, or other serious medical conditions."

That warning includes implanted medical devices, such as cardiac pacemakers, hearing aids and defibrillators, as well as anyone with epilepsy or a history of seizures and blackouts. But manufacturers say some people can seize even without a history of blackouts, especially those younger than 20, so manufacturers suggest keeping an eye out for involuntary muscle twitches and loss of balance as a signal of a potential problem.

Daydream also suggests avoiding play entirely if you're "intoxicated, overly tired, or are suffering from a cold, headache, upset stomach, or other sickness" because the experience of virtual reality might make you feel worse.

And if that's not enough, Daydream View warns that sharing the device could spread contagious diseases and infections and even cause skin irritation.

Children at most risk

Gotsis believes that families with younger children should be especially cautious with virtual reality, even if they purchased the game for teens or young adults.

"It's almost impossible to hold up something shiny in front of a young child and then say 'no, you can't have this,' " she said. "So parents have to tell the older child that part of your responsibility is to take care of their younger siblings, to help them understand they shouldn't use it."

If they do try it, Gotsis adds, the younger the child, the shorter the exposure should be.

"Children may not know how to communicate discomfort of any sort, such as visual discomfort or motion sickness, so you don't want prolonged exposure on screen," she said.

Jeremy Bailenson, director of Stanford's Virtual Human Interaction Lab, uses VR himself and on subjects in his lab daily. Yet he has let his 6-year-old daughter use it only four times in her life, each time for a duration of only five minutes.

"We read a lot of new studies in our work," he said, "but what we are seeing is a ton of studies on medical applications and not many with young kids, and not really any with really young kids."

Berkeley's Banks agrees. "The research has been done primarily in young adults ... so we don't really know what is going to happen to a young child."

Most major manufacturers have set a cutoff age: no use of the device for children under the age of 13. Playstation VR set the age limit at 12; HTC's Vive doesn't mention an age, only that it is not "designed to be used by children."

Google Cardboard has no age restriction but says it should not be used without adult supervision.

Stanford's Greenleaf believes that until research catches up, parents, "and in fact everyone, should be very judicious" about use.

"I would be concerned for everyone who uses this," he said. "You don't have to have a young brain to have an impact."

Virtual reality content can also affect your perception of reality.

"VR can be stored in the brain's memory center in ways that are strikingly similar to real-world physical experiences," said Stanford's Bailenson, author of the forthcoming book "Experience on Demand," about his two decades of research on the psychological effects of virtual reality. "When VR is done well, the brain believes it is real."

That's great if the content is fun, educational or inspirational. For example, research shows that adults can be taught to recycle, increase their physical activity or become more empathetic to those of different races if they see themselves doing so virtually.

But what if the content is scary or combative? Some of today's popular VR games allow you to fight off bloody zombies, get a "virtual tour of hell," battle "endless waves of combatants" and kill as many as you can in "survival horror." In one game, you can even shoot yourself in the head.

The health and safety page for Google's Daydream View says it straight out:

"If the content is frightening, violent, or anxiety provoking, it can cause your body to react physically, including increasing your heart rate and blood pressure. It can also, in some individuals, cause psychological reactions, including anxiety, fear, or even Post Traumatic Stress Disorder."

"If you were to do this in the real world, how would it affect you? That's the way to think about virtual reality," Bailenson said, adding that research shows becoming someone else in VR produces greater changes in real-life attitudes and behavior than watching video or doing role playing.

"So don't think of VR as a 'media experience,' because the brain sees it as similar to an actual experience," he said. "If it's an activity that you're ethically not comfortable with in real life, don't do it. If you think of it that way, the guidelines on what you want to do in VR become very clear."

It should come as no surprise that studies show children may be even more susceptible to confusing virtual reality with the real thing, with the youngest at most risk. In a 2009 study, young elementary children watched their virtual doppelgänger swimming with orcas. When these kids were questioned a week later, they said they believed their virtual experience to be real.

In a recent study by Jackie Bailey of the University of Texas, funded by the nonprofit Sesame Workshop, 55 children between the ages of 4 and 6 played the game Simon Says with the furry blue monster Grover, a popular character. Half of the children played in virtual reality; the other half played with Grover's character on a TV. The games lasted five minutes.

The good news, says Bailenson, is that none of the children in the VR experience became dizzy or had unpleasant physical reactions to their short exposure.

"But the children who saw Grover in VR saw him as more real," he said. "Grover was more influential in immersive VR than on TV, and it was harder for the children to inhibit their actions and not do what Grover did."

It's not just little ones that might internalize a VR scenario. Older adolescents were also found to be painfully sensitive to being socially excluded in a virtual environment.

This means parents need to be careful about the type of VR content they allow their children to view, experts say.

"A spider can be a fun spider or a scary spider. I don't know what it's like until I actually try it," Gotsis said. "So I find that nothing will replace the parent doing the experience themselves and saying 'OK, this is fine for my child.' And then do it with them. Walk them through it. There's a huge difference between experiencing something alone or with others."

And as long as parents do their job, Bailenson believes, future research will show that virtual reality can be enjoyed by children without harm.