The US ban: Why these seven? 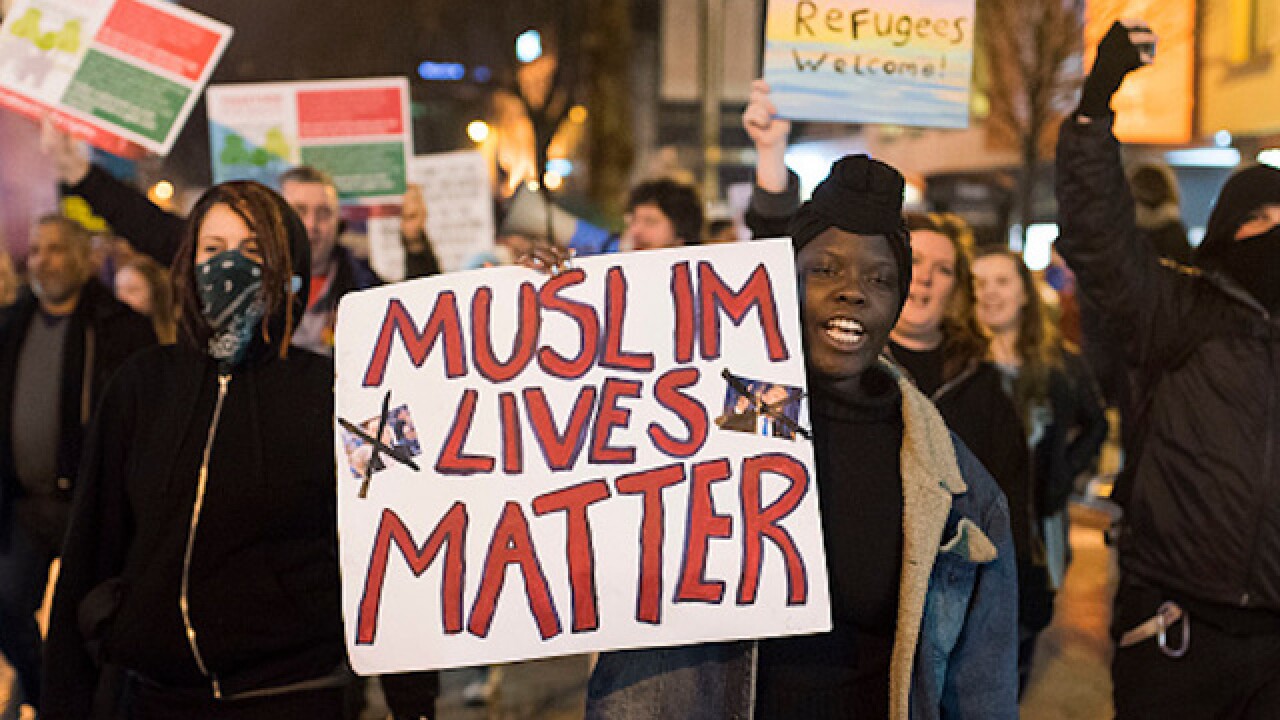 Copyright Getty Images
Matthew Horwood
<p>CARDIFF, WALES - JANUARY 30: A woman holds a sign that reads 'Muslim Lives Matter' during a protest on Queen Street following US President Donald Trump's ban on people from seven Muslim-majority countries entering the US on January 30, 2017 in Cardiff, Wales. President Trump signed an executive order on Friday banning immigration to the USA from seven muslim countries. This led to protests across America and, today, the UK. A British petition asking for the downgrading of Trump's State visit passed one million signatures this morning. (Photo by Matthew Horwood/Getty Images)</p>

The circular issued by the US Department of Homeland Security (DHS) could not be clearer.

"For the next 90 days, nearly all travelers, except US citizens, traveling from Iraq. Syria, Sudan, Iran, Somalia, Libya and Yemen will be temporarily suspended from entry to the United States."

But why this mixed bag of countries?

The Trump administration points out that all were previously on a list of "countries of concern." This is true.

On January 21, 2016, Iran, Iraq, Sudan and Syria were the first countries put on the list. The following month, the DHS added Libya, Somalia and Yemen after consulting the director of national intelligence and the State Department.

But -- and it's a substantial "but" -- those new restrictions were not aimed at citizens of these countries. They were aimed at those eligible for the Visa Waiver Program (VWP): people of dual nationality or -- for example -- someone of French or Belgian nationality who'd been to Yemen or Iraq. Those restrictions did not amount to a ban on entry but demanded much more information from applicants.

The main reason, according to the US Customs and Border Patrol, was "the risks posed by the situation in Syria and Iraq, where instability has attracted thousands of foreign fighters, including many from VWP countries. Such individuals could travel to the United States." (The US maintains a Visa Waiver Program with 38 countries.)

By contrast, President Trump's executive order is specifically aimed at nationals of the seven countries, not those who have traveled to those states, and it is an outright ban.

The executive order does not explain why these countries have been selected and others not, except to say that "deteriorating conditions in certain countries due to war, strife, disaster, and civil unrest increase the likelihood that terrorists will use any means possible to enter the United States."

The conditions in these countries offer at least some reasons for their inclusion, if not a complete picture.

There are still thousands of foreign fighters in Iraq and Syria. ISIS has a substantial presence in both countries and is pledged to take its fight to western Europe and the United States, especially as its core territory shrinks.

In most instances, ISIS has used its pool of foreign fighters -- especially Belgian and French citizens -- to plan and carry out its overseas attacks, or sought to encourage others already living in the West to launch terror attacks. However, in October, a Syrian refugee allegedly with links to ISIS was arrested in Germany after explosives were found in his apartment. Two other Syrians turned him in to authorities.

Another Syrian who had applied for asylum in Germany blew himself up in July in an attack in Ansbach.

Al Qaeda is strong in Syria and Yemen and has repeatedly demonstrated its intent to launch attacks on the West. But not -- so far -- by trying to send Syrians or Yemenis abroad. The brothers who attacked the Charlie Hebdo offices were French but had spent time with al Qaeda in the Arabian Peninsula (AQAP).

Other AQAP conspiracies have focused on trying to smuggle bombs on board civilian aircraft bound for the US.

AQAP is explicit in making the US its number one target -- but largely by encouraging lone-wolf attacks. And it's not, by any means, exclusively a Yemeni organization. The group's master bomb-maker is a Saudi, Ibrahim al Asiri, and AQAP's "underwear bomber" in 2009 was a Nigerian.

Both ISIS and al Qaeda are "trans-national" in nature, with members from dozens of countries.

Somalia has endured nearly three decades of civil war and terrorism. Al Shabaab, an al Qaeda affiliate, regularly launches suicide attacks in the capital, Mogadishu, and across the country, as well as in neighboring Kenya. An unknown number of Americans of Somali descent -- probably in the dozens -- have joined the group; many have been killed in Somalia. But much as Shabaab would like to launch an attack in the West, there is no evidence that it has tried to.

Libya has become a base for ISIS in the last two years, but the group has lost its urban footholds in Derna and Sirte and retreated to the desert. In any case, many of its more important figures are not Libyan but Tunisian. There are also plenty of Tunisians in ISIS ranks in Syria and Iraq, and the Berlin Christmas market attacker was Tunisian, but it's not one of the countries covered in the new executive order.

Sudan was a base for al Qaeda in the 1990s, when Osama bin Laden lived there, and has been designated a state sponsor of terrorism by the US for more than 20 years. But nowadays the Sudanese regime, while still embracing conservative Sunni Islam, tries to combat jihadist groups. President Obama recognized the change last year; he lifted some sanctions because of Sudan's "cooperation with the United States on addressing regional conflicts and the threat of terrorism."

Unlike the other six, Iran is a predominantly Shia Muslim country that's been involved in fighting ISIS in both Syria and Iraq. But the US says it remains the leading state sponsor of terrorism through its "support for (the Lebanese militia) Hezbollah, Palestinian terrorist groups in Gaza, and various groups in Iraq and throughout the Middle East."

In only one instance have elements from Iran been allegedly involved in a plot in the US. In 2011, an Iranian-American who had lived in the US for decades hatched a plan to assassinate the Saudi Ambassador in Washington. Then US Attorney General Eric Holder said the plot had been endorsed by parts of the Iranian government, but Iran denied any involvement.

What about other countries?

In 2014, more than 55 percent of terror attacks worldwide occurred in five countries, according to the State Department. Only one of those countries -- Iraq -- is covered in the executive order. The other four -- India, Pakistan, Afghanistan and Nigeria -- are not.

Nor are other countries -- such as Morocco, Tunisia and Saudi Arabia -- thousands of whose citizens are active in jihadist groups around the world. The executive order mentions the failure to properly scrutinize visa applications of the 9/11 hijackers, but most of them were Saudis.

In its comprehensive review of terror cases in the US since 9/11, the New America Foundation notes that "every jihadist who conducted a lethal attack inside the United States since 9/11 was (an American) citizen or legal resident."

Some have had no confirmed links with terror groups; others have associated themselves with ISIS. Some appear to have been driven primarily by personal issues.

Some have had training overseas -- such as Najibullah Zazi -- others have not.

There have been a handful of non-lethal attacks in the US by migrants, including two last year by men of Somali origin. One of them had come to the US from Pakistan; the other had been born in Kenya. There was no evidence of any link to terror groups in either case.

Shutting down any terror "pipeline" in an age of transnational jihad and online radicalization has to be driven by sophisticated intelligence networks. The record of terror conspiracies and attacks suggests that a blanket ban on travel or immigration from any one country is -- at best - a blunt instrument.

As al Qaeda ideologue Anwar al-Awlaki put it in 2010, "Jihad is becoming as American as apple pie and as British as afternoon tea."