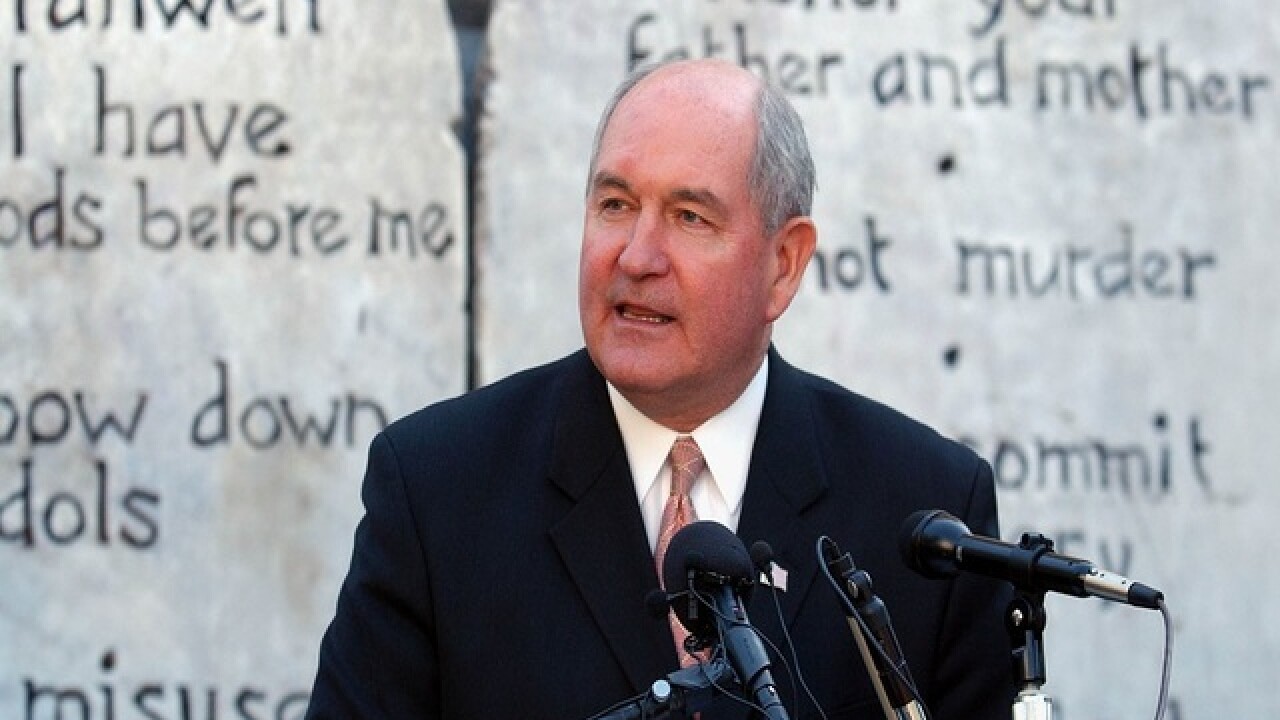 Copyright 2017 Scripps Media, Inc. All rights reserved. This material may not be published, broadcast, rewritten, or redistributed.
Erik S. Lesser
<p>ATLANTA - SEPTEMBER 29: Georgia Republican Governor Sonny Perdue speaks in support of the public display of the Ten Commandments during the Spirit of Montgomery-Save the Commandments Caravan at the state Capitol September 29, 2003 in Atlanta, Georgia. The weeklong caravan will end on October 6th at the steps of the U.S. Supreme Court. (Photo by Erik S. Lesser/Getty Images)</p>

(CNN) -- President-elect Donald Trump picked the final member of his Cabinet on Wednesday, landing on former Georgia Gov. Sonny Perdue to serve as agriculture secretary and in the process locking in an inaugural Cabinet devoid of any Latino representation.
Trump will name Perdue to head the Agriculture Department on Thursday, a transition official told CNN on Wednesday. The other top contender for the post was former California Lt. Gov. Abel Maldonado, who is Hispanic.
The announcement will seal the makeup of Trump's inaugural Cabinet should all of his nominees be confirmed by the Senate.
Only two of Trump's Cabinet appointees are ethnic minorities: Ben Carson, Trump's pick to lead the Department of Housing and Urban Development is black and his choice for transportation secretary, Elaine Chao, is Asian. Trump also tapped Nikki Haley, the Indian-American governor of South Carolina, to serve as UN ambassador, which is a Cabinet-rank post, but not an official member of the Cabinet.
Latinos have served in Cabinet positions in every presidential administration since 1988.
But Trump's break with that precedent is even more notable given his divisive and inflammatory rhetoric about Latinos during his presidential campaign.
Trump kicked off his campaign by labeling undocumented Mexican immigrants criminals and "rapists" and vowed to deport all undocumented immigrants living in the US during his campaign.
Trump interviewed several Latinos for the two final Cabinet posts he sought to fill -- leaders for the Departments of Agriculture and Veterans Affairs -- but landed instead on white men for both posts.
Thirteen of Trump's picks to form his official 16-member Cabinet are white men.
Following reports of the agriculture pick, Georgia Sen. David Perdue, the former Georgia governor's cousin, went online to send his congratulations.
"Couldn't be prouder of my cousin Sonny Perdue for being nominated to be our next secretary of agriculture," Perdue wrote in a post on Twitter and Facebook.
The-CNN-Wire
™ & © 2017 Cable News Network, Inc., a Time Warner Company. All rights reserved.
Copyright 2017 Scripps Media, Inc. All rights reserved. This material may not be published, broadcast, rewritten, or redistributed.