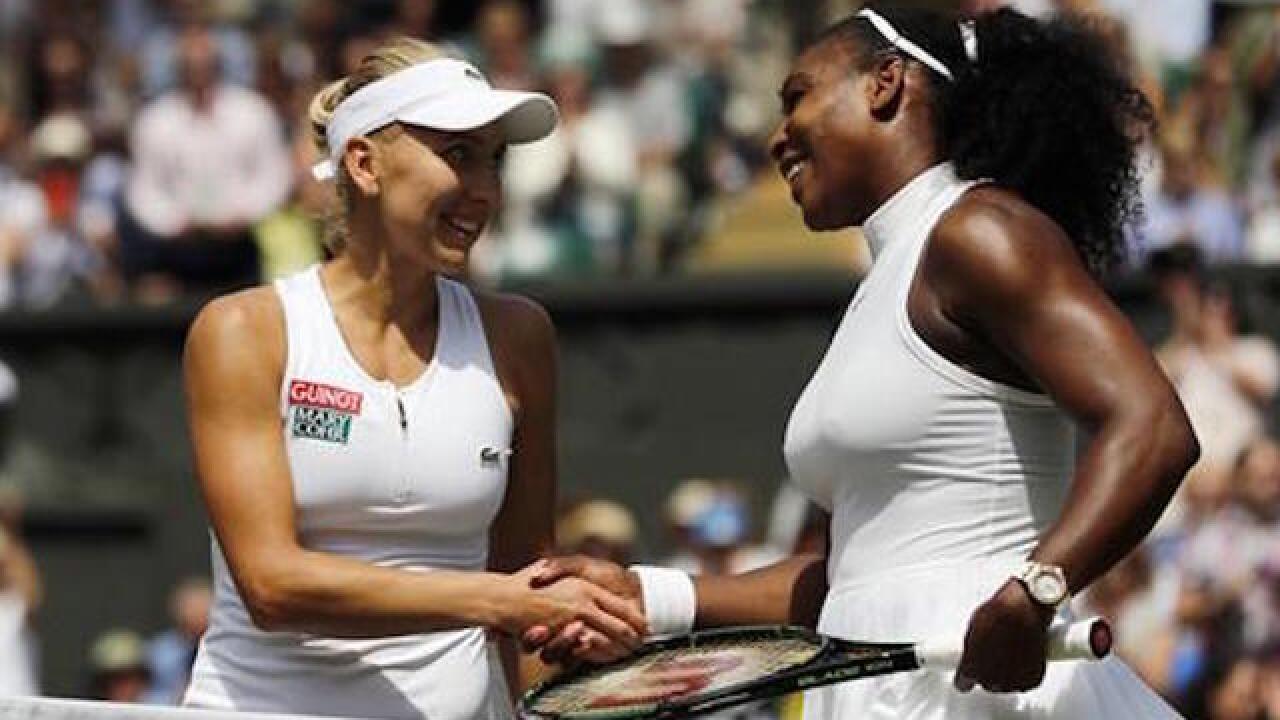 LONDON (AP) — Instead of the ninth all-Williams final at a Grand Slam tournament, there will be a rematch of another sort to determine the title at Wimbledon.

And so as Serena Williams again stands one victory from her record-tying 22nd major title, she will need to beat a woman who already stopped her once this year in that pursuit, Angelique Kerber.

After Williams needed all of 48 minutes to overwhelm Elena Vesnina 6-2, 6-0 at the All England Club, older sister Venus failed to join in the family fun, losing to Kerber 6-4, 6-4 in Thursday's second semifinal.

Since winning her sixth Wimbledon trophy a year ago to raise her career count at Grand Slam events to 21, Serena has come quite close to pulling even with Steffi Graf at 22 — the most in the Open era, which began in 1968 (Margaret Court's all-time mark is 24). But the American was surprisingly beaten by Roberta Vinci in the U.S. Open semifinals last September, then by Kerber in the Australian Open final in January, and by Garbine Muguruza in the French Open final last month.

Reaching the final at each of a year's first three major tournaments might sound good to other players.

Not to this one.

When a reporter asked what she makes of it when others talk about her as one of history's greatest female athletes, this was the reply: "I prefer the word, one of the greatest 'athletes' of all time."

And the case will be even stronger if she can do what she couldn't in Melbourne: solve Kerber's left-handed game.

"I know," Kerber said, "she will go out and try everything to beat me right now."

She insisted Thursday she's more relaxed and more confident on court thanks to that big moment.

Didn't necessarily look that way at the outset against Venus, who at 36 was the oldest major semifinalist since Martina Navratilova was 37 at the All England Club in 1994.

Venus is a five-time Wimbledon champion but hadn't been to the semifinals since she was the runner-up to Serena seven years ago.

"Steps away from making it to the end," Venus said. "That's the position I want to be in, is playing in the semifinals, playing for a space in the final."

But against Kerber, Venus was broken the first four times she served.

Perhaps the accumulated court time during this fortnight simply took a toll on Venus, who revealed in 2011 that she had Sjongren's syndrome, which can cause fatigue and joint pain.

She was a half-step slow to some balls, was breathing heavily after longer points, and wound up with 21 unforced errors, 10 more than Kerber.

"I was trying to (move) her, as well," the fourth-seeded Kerber said. "That was the plan."

After a running cross-court forehand winner capped the 19-stroke exchange that ended her victory, Kerber tossed aside her racket and dropped to her knees at the baseline.

That match managed to be more competitive than what transpired earlier, which more closely resembled a training session for the No. 1-ranked Serena — except she probably gets more of a workout when she practices.

"I couldn't do anything today," Vesnina said.

Serena's serve was in fine form, reaching 123 mph and producing 11 aces against the 50th-ranked Vesnina, who was making her major semifinal debut. Serena won 28 of 31 points she served, including the last 17.

Serena had Vesnina looking defeated after all of 12 points. That's when, after sprinting for a forehand that landed in the net, the Russian leaned over, sighed and slumped her shoulders.

There would be plenty more of that sort of body language from Vesnina, a two-time Wimbledon runner-up in doubles who later Thursday went out in the quarterfinals of that event and lost to Serena a second time.

That means Venus still has a chance to leave Wimbledon with a trophy, just like her sister.