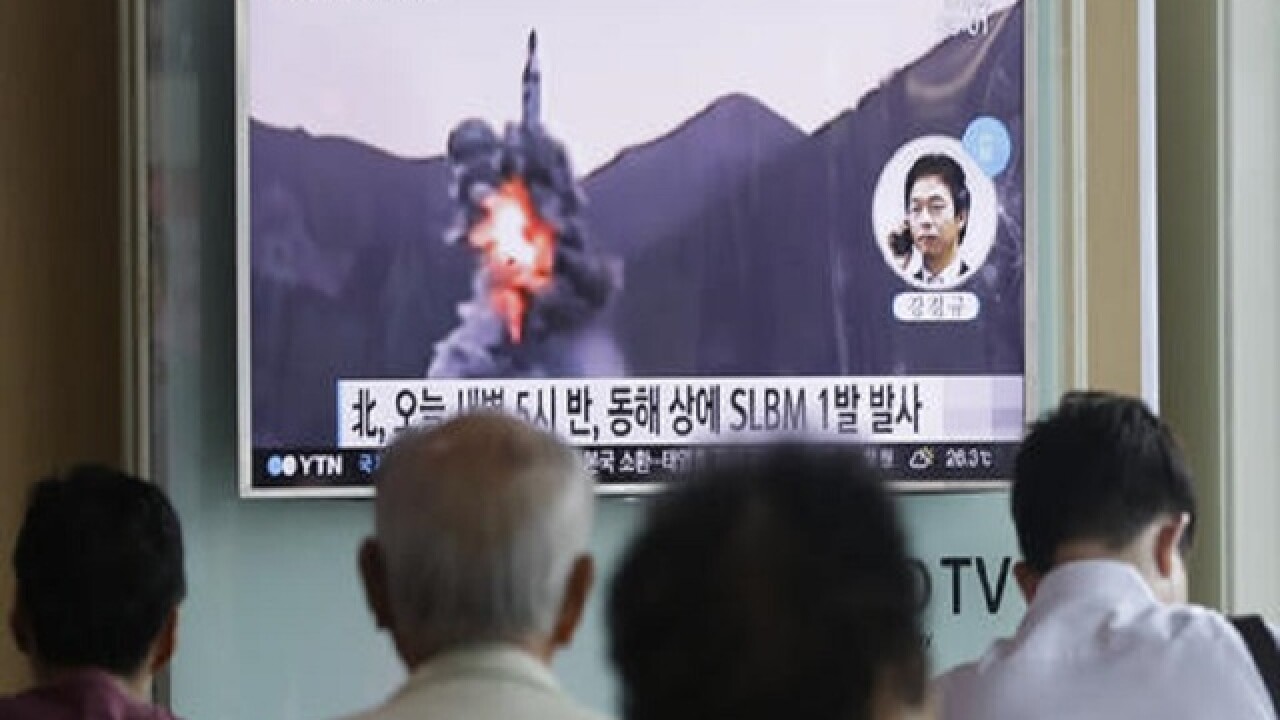 SEOUL, South Korea (AP) — A North Korean ballistic missile fired from a submarine Wednesday flew about 500 kilometers (310 miles) in the longest flight by that type of weapon, Seoul officials said, a range that can place much of South Korea within its striking distance.
Seoul officials condemned the launch as an "armed protest" against the start of annual South Korean-U.S. military drills that North Korean calls an invasion rehearsal. The launch was also the latest in a series of missile, rocket and other weapon tests by North Korea, which is openly pushing to acquire a reliable weapon capable striking targets as far away as the continental U.S.
The missile fired from a submarine off the eastern North Korean coastal town of Sinpo reached into Japan's air defense identification zone, according to Seoul and Tokyo officials. The U.S. Strategic Command said it tracked the North Korean submarine launch of the presumed KN-11 missile into the Sea of Japan.
"This is an impermissible and outrageous act that represents a grave threat to the security of Japan and seriously undermines the peace and stability of the region," Japanese Prime Minister Shinzo Abe said.
South Korea's Joint Chiefs of Staff said the launch showed an "improvement" in ability over previous similar missile tests.
The 500-kilometer distance is longer than ones recorded by other submarine-launched missiles launched by North Korea, and puts most of South Korea within its range if it is fired near the border, although North Korea already has a variety of land-based missiles that can strike South Korea and Japan.
The North's acquiring the ability to launch missiles from submarines would be an alarming development because missiles fired from submerged vessels are harder to detect in advance. The U.S. Strategic Command statement said the North Korean launch did not pose a threat to North America but that the U.S. military "remains vigilant in the face of North Korean provocations."
North Korea fired two missiles from submarines earlier this year but South Korean defense officials believe they exploded in midair after flying fewer than 30 kilometers (18 miles).
North Korea's missile and nuclear programs are a source of regional security concerns. Many outside experts say the North doesn't yet have a reliable long-range nuclear missile capable of reaching the continental U.S., but they acknowledge the North has been making steady progress on its weapons programs and could one day acquire such a weapon.
Some civilian experts said they believe the North already has the technology to put warheads on shorter-range missiles that can strike South Korea and Japan.
South Korean defense officials believe North Korea has about 70 operational submarines and appears to be mainly imitating Russian designs to develop submarine-launched missiles. It is believed the North obtained several Soviet-era Golf-class ballistic missile submarines in the mid-1990s.
Wednesday's launch comes two days after the U.S. and South Korea began their 12-day Ulchi Freedom Guardian exercises, prompting North Korean threats of retaliation. Before the launch, North Korea warned that the joint military exercises were pushing the Korean Peninsula "to the brink of a war" and asked for an urgent meeting of the U.N. Security Council.
South Korea's Foreign Ministry warned the North's pursuit of weapons programs would only invite more sanctions, deepen its international isolation, and eventually speed up its collapse. The South's Joint Chiefs of Staff noted the launch violated U.N. Security Council resolutions that ban any ballistic missile activities by North Korea.
The launch also comes at a time of intensified animosities between the rival Koreas over the defection of a senior North Korean diplomat in London and a U.S. plan to install a sophisticated missile defense system in South Korea.
About 28,500 U.S. troops are based in South Korea to help deter potential aggression from North Korea, a legacy of the 1950-53 Korean War that ended with an armistice, not a peace treaty. North Korea usually responds to the regular South Korea-U.S. military drills with weapons tests and fiery warlike rhetoric.
The American-led U.N. Command in South Korea on Tuesday accused North Korea of planting land mines near a truce village inside the Demilitarized Zone that divides the two Koreas. Much of the border, one of the world's most dangerous flashpoints, is strewn with land mines and laced with barbed wire. South Korean media said no land mines had been planted in the area of the truce village of Panmunjom until North Korea placed an unspecified number there last week.
Copyright 2016 The Associated Press. All rights reserved. This material may not be published, broadcast, rewritten or redistributed.